Meet the President and Rector

Born in Canada, educated at the University of Toronto and Harvard, CEU President and Rector Michael Ignatieff is a university professor, writer and former politician. He is a member of the Queen’s Privy Council for Canada and holds thirteen honorary degrees.

Between 2014 and 2016 Michael Ignatieff was Edward R. Murrow Chair of Press, Politics and Public Policy at the Harvard Kennedy School.

Between 2012 and 2015 Michael Ignatieff served as Centennial Chair at the Carnegie Council for Ethics in International Affairs in New York.

In 1991 CEU was founded with a mission. That mission—educating free minds for a free society—is more urgent than ever. Today more than 16,000 alumni carry the values we teach—respect for knowledge and critical inquiry—into responsible positions in government, business, civil society, academic life and politics around the world. As one of the world’s most influential social sciences universities, we’ve attained global recognition for teaching and research. And with students, faculty and staff from well over a hundred countries, CEU is one of the most diverse, open and pluralistic academic communities in the world. We are proud of our path-breaking research in a range of disciplines, new initiatives in emerging fields like cognitive and network science, together with our longstanding commitments in Roma education and leadership training and our pioneering work in opening up higher education to Europe’s refugees and migrants. These are examples of the work that best serves our unique mission.

We are equally proud to stand as a beacon of academic freedom and institutional autonomy. As a community of faculty, students and staff, we believe passionately in the power of knowledge to solve society’s most pressing problems.

This year we will open a new campus in Vienna, one of the world’s great university cities, from September 2019. We will offer our world-ranked masters and doctoral programs with US accreditation to all incoming students. This pioneering cohort will also spend part of its academic year in Budapest, in our Hungarian facility, alongside returning students who continue their studies there.

Our new strategic plan charts the future direction of the University through the next five years. That plan commits the University to strengthen our masters’ and doctoral teaching, to develop a new portfolio of undergraduate programs, to build on our success as a research institution and, most exciting of all, to work with the Open Society Foundation to develop a network of universities like ourselves devoted to furthering the open society mission.

Our founder, the philanthropist George Soros, demonstrated uncommon vision in providing the resources that enable us to accomplish our mission. Now it is up to the CEU community: its dedicated staff, world-class teachers, and adventurous alumni, to grow our resources, to manage them prudently and invest them in projects that further our mission. We want to enlarge our community of support, to reach out to philanthropists, foundations, corporations and other private donors who share our dedication to education for free minds and free spirits.

In a world of polarization and division, we must remain dedicated to the task of teaching our students that knowledge is the only sure guide to moral choice and public policy. Universities like ours cannot retreat from the world. If we remain faithful to our mission—to winnow the grain of knowledge from the chaff of ideology, partisanship, rhetoric and lies, we will be doing the university’s part to defend free and open societies. On behalf of CEU, I want to welcome you to our community and invite you to join us in our mission. 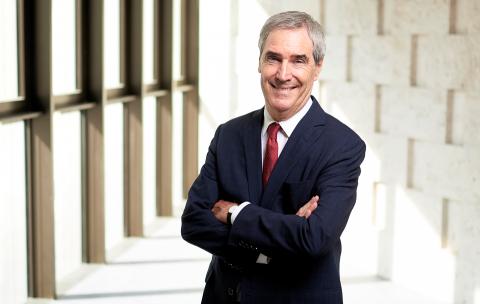 Michael Ignatieff Announces He Is to Step Down in Summer ‘21

Being European: The Need for Higher Education Leadership