Hungarian Prime Minister Viktor Orban, President of Hungary Janos Ader, and Speaker of the National Assembly of Hungary, Laszlo Kover, presented prestigious state awards on the occasion of the August 20 celebration of the founding of the Hungarian state. The awardees received their distinctions for excellence in their service to the country, for fostering its development and advancing its interests, and for promoting universal human values. Laszlo Csaba, a professor in the Department of International Relations and European Studies, and also a corresponding member of the Hungarian Academy of Sciences, received the Commander’s Cross Order of the Merit of Hungary (civil division). The awarding ceremony took place in the Dome Hall of the Hungarian Parliament building. 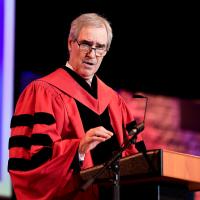