The Past Comes Alive on CEU Medieval Radio

Fantasy, historical fiction, and related video games gross billions of dollars per year. As a culture, we are fascinated by the past but what do we really know about it? For example, we assign qualities to the Middle Ages – it was a dark period ravaged by plague and violence, populated with ignorant, pre-Reformation simpletons.

CEU Medieval Radio – the world's only

English-speaking online radio dedicated to the music and the study of the Middle Ages – aims to enlighten listeners about the medieval and early modern eras. With barely a €300 annual budget and a lot of dedication, CEU students Tamas Kiss, Kyra Lyublyanovics, Zsuzsanna Eke, and Christopher Mielke have turned their brainchild into a popular audio destination with over 13,000 listeners per month from 142 countries.

“A pair of Hungarian teenagers appeared on the CEU Medieval Radio Facebook page, chatting about the station and these guys are into medieval fantasy games,” said Kiss. “This is an opportunity to teach people drawn into the Middle Ages via computer games about the real Middle Ages.” 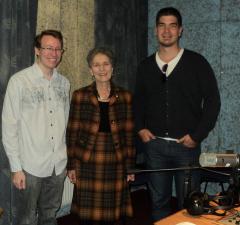 The station's talk show, “Past Perfect!” has already reached its 47th episode with many more to come when the station revs up again in the fall. “Past Perfect!” features conversations with some of the field's most prominent academics on a variety of topics from medieval philosophy to the importance of certain geographical trade centers. World-renowned historian Natalie Zemon Davis discussed her research on the mysterious case of Martin Guerre, a medieval con artist who managed to convince a missing man's wife and family that he was their lost kin. Ultimately, the man was hanged for his deception. CEU Associate Professor Gyorgy Gereby discussed the misnomers about the Middle Ages and, it turns out, the idea that the world was flat was perpetuated by 18th century British historian Edward Gibbon who despised the Middle Ages. He capitalized on a sentence written by a Byzantine author that could have been interpreted as pronouncing the world flat. The writer did not believe the world was flat, Gibbon simply wanted to make him look stupid. Professor Nicholas Coureas (The Cyprus Research Centre) talked about the importance of Cyprus – “a great medieval emporium” – that served as a crucial trade link between the western and eastern worlds, when Ottoman control kept Westerners from directly trading with Asian countries.

The station has begun featuring externally produced but relevant podcasts, most recently historian Michael Rank's “History in Five Minutes.” A boon for cash-strapped shows, the programs can advertise one another's programing to their respective audiences that, presumably, have overlapping interests. 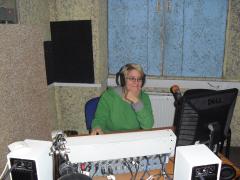 Kiss and his classmates have learned all of the technical aspects along the way; none of them had radio experience before CEU Medieval Radio. With such a tiny budget (provided by CEU's Department of Medieval Studies) the station has no physical studio, so producers and hosts use the facilities of other radio stations to record. But the “little station that could” has big ambitions – among them, to gain 1 million Facebook likes. “When I started the campaign, the server collapsed,” said Kiss. “At one point 6,000 people wanted to log onto the stream!” The station volunteers believe that the Middle Ages and the Renaissance affect our lives even today and that, in a world of 2.4 billion Internet users, they can find 1 million medieval and Renaissance enthusiasts to like their Facebook fan site. “It's amazing how quickly CEU Medieval Radio became a phenomenon.

CEU Medieval Radio is currently accessible via live streaming as well as on every major web radio portal, while its talk shows are transmitted both on the Internet and in terrestrial broadcast in the Budapest area in association with Civil Radio FM98. Kiss hopes the station can be integrated into CEU's institutional framework so it will become eligible for grants and other funding. To listen, visit their web page www.medievalradio.org or Facebook page https://www.facebook.com/pages/CEU-Medieval-Radio/276004769135858.