Economic crises of global proportions require innovative solutions and even questioning of accepted concepts and methodologies. In advance of a spring 2014 special issue of the Journal of Economic Methodology, the CEU office of the Provost, the Institute for Economic Thinking (INET), and the Journal held a workshop to discuss alternative economic thinking, featuring CEU Founder and Honorary Chairman George Soros. The discussion follows on INET's lively 2012 plenary session titled “Paradigm Lost: Rethinking Economics and Politics” during which over 300 scholars, students, journalists, and policymakers discussed the challenges posed by inequality, unemployment, climate change, and global financial disarray. 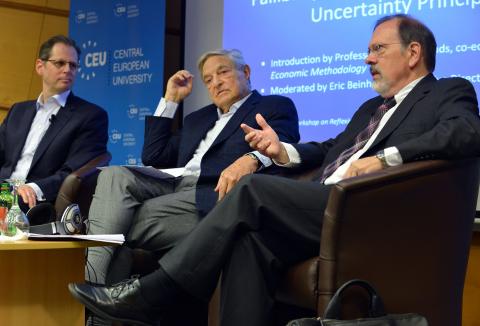 At the October 8 event, Soros spoke about “Fallibility, Reflexivity and the Human Uncertainty Principle,” chronicling his own pursuit of economic philosophy since his days as an undergraduate at the London School of Economics. When mainstream economics and academics “largely ignored or dismissed” his emerging theories, Soros labeled himself a “failed philosopher.” Presenter Wade Hands, distinguished professor of economics at the University of Puget Sound, believes, however, that Soros's ideas are “an important contribution to the literature on reflexivity.”

“There's a methodological moment in economics right now – a spark – on the macro side, and it's come from the financial crisis,” said Wade. “But there's also a rise in behavioral economics, game theory, and other areas and these internal and external moments are coming together to make economists and academics reexamine their methodologies and approaches.”

Soros shared part of his personal history in the hope that it would impact the lives of CEU students in the audience and in order to give context to his framework which he considers “not just theoretical but also emotional.” While studying under philosopher Karl Popper at LSE, Soros constantly juxtaposed the economics concept of “perfect” competition, and Popper's ideas about open society and found the two at odds. As a student, Soros focused on human fallibility and regimes that claimed possession of absolute truth.

“Popper showed that there is something similar in Nazi ideology and communism – namely both claimed that they had access to the ultimate truth and, since that's not possible, that can only be claimed by compulsion,” Soros said. “Open society is based on the recognition of our fallibility – that we don't have access to the ultimate truth. This led me to start developing this conceptual framework with reflexivity and human uncertainty. It was not confined to financial markets but it turned out to be very useful in financial markets.”

Soros named his family's escape from Nazi and Soviet persecution as the formative experience of his life, pointing out that his father's extraordinary experiences during WWI prepared him to deal with abnormal, life-threatening situations that Soros described as “far from equilibrium” experiences. Soros's father was a prisoner of war in Siberia who organized an escape and then became involved in the Russian Revolution.

“My father had learned during the First World War that normal rules don't apply in these situations and that you can perish if you follow the rules,” Soros said. “My father took things into his own hands. Not only did we survive, but my father succeeded in helping others survive.”

In developing his theoretical framework, Soros emphasized two major concepts that he says have aided him in “both making money and spending it.” The first is the hypothesis of radical fallibility - the notion that even true theories, because they are so rare and valuable, get exploited so much and extended into areas where they are not relevant or misleading that they become overexploited and inapplicable. The second premise is that of the so-called “fertile fallacy” or “boom and bust” theory that Soros applied to his dealings with financial markets. “I specialized in discovering boom-bust sequences in financial markets,” Soros said. “If I identified an idea that was effective in moving markets and I could also identify the flaw in that concept, then I really felt that I was ahead of the game because I could exploit the market move and I could also get out before it was reversed.”

During the 2008 financial crisis, the status of Soros's conceptual framework changed and it began to be recognized as a relevant explanation of the crisis itself, he noted.

“This is not, again, meant to promote my theory, but recognize that there was a crisis in economic thinking – a need to explore alternatives. With this study that the Journal is organizing, it's time to bring this thinking into CEU and I hope that's going to affect your lives as students. I hope there will be more of this new thinking finding a home at CEU. That's really the story of the theory itself and partly of CEU.”

The discussion was moderated by Eric Beinhocker, executive director of INET and visiting professor at CEU's School of Public Policy.