It’s natural that liberals and conservatives, Democrats and Republicans, are finding it difficult to make compromises to solve the current budget crisis in the U.S., according to cognitive linguist George Lakoff, professor at the University of California, Berkeley who spoke Oct. 15 at CEU. It’s because the two groups view the world based on vastly different metaphors that are wired into our cognitive functioning, he said.

From childhood, our brain circuitry develops according to one of two primary metaphors that have implications throughout our lives, as Lakoff described in his 1980 book “Metaphors We Live By.” One is the nurturant parent metaphor, in which two parents have equal responsibility, and place value on empathy, individual responsibility, and family or community responsibility. The other is the strict father model, in which the father holds complete authority, determines right from wrong and is solely responsible for the family. Here, children are not inherently moral – they must develop the discipline to do what is moral and right, and if they do that, prosperity will follow.

“With these you get a very different view of democracy,” Lakoff said. “Project [the nurturant parent model] onto government, and you get a view of democracy on which American government was based. Citizens care about each other, act through government to provide education, health, roads, sewage, electric grids, police force et cetera, all that’s necessary to live a decent life.”

By contrast, the strict father metaphor implies that “democracy is about the liberty of each individual to pursue their own interest without any assistance from the state and without responsibility for anyone else,” Lakoff said. As a result, conservatives tend to deny the basic truth that all citizens do benefit from public resources such as education and police protection, he said. 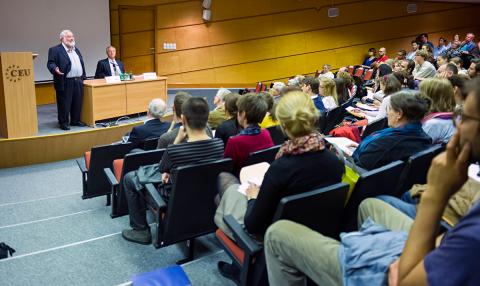 “Conservatives see public resources as making people dependent, and therefore immoral,” he said. “That’s what’s happening in the government right now. That is what is behind the shutdown.”

So why can’t the two sides come to an agreement? One reason is that if the strict father model equates the father with total authority, then conservatism itself must have ultimate authority and is incapable of compromise, Lakoff said. As such, the metaphor requires that conservatives oppose the proposals of liberals even if they agree with every component, as in the Obamacare battle.

Secondly, the nurturant parent metaphor that is wired into the brain circuitry of liberals is based on enlightenment reasoning, meaning liberals assume that people will use logic to come to conclusions. So they argue against the proposals of conservatives based on logic, trying to convince moderates to come around to their point of view.

“This is the myth-busting tactic,” Lakoff said. “It doesn’t work. You have to speak morally. You have to use morality and narratives – tell stories that convey your moral system, not the other. This is well understood by conservatives, who teach it.”

In the Obamacare example, conservatives argued that it represents a “government takeover” of health care, and creates dependency, i.e. moral weakness, on the part of the people. That convinced voters who were then able to overlook the logic of provisions that when considered individually, were supported by 60 to 80 percent of the population. This knowledge and skill on the part of conservatives is the focal point of Lakoff’s 1996 book, “Moral Politics: What Conservatives Know That Liberals Don’t.” 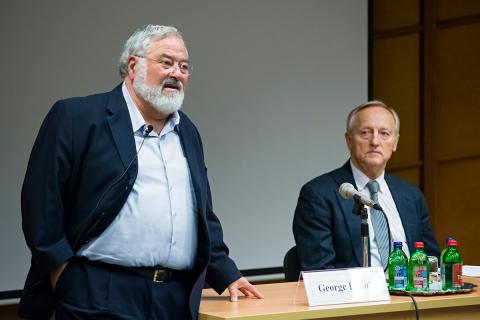 Lakoff illustrated how these metaphors play out in Hungarian politics, where an authoritarian government is in power parallel to the strict father metaphor. He criticized government moves like nationalizing companies and taking control over private pension funds.

“When people are scared and unstable in an unstable situation, they look for a strict father leader and they found one,” he said. “A lot of voters grew up under communism, which is an interesting case because party rule was brutal, total authority, but it was supposed to help people. People in Hungary are used to this – to having a strict father with a supposedly nurturing role.”

Moderator Zoltan Kovecses, a linguist and professor in the Department of American Studies at Eotvos Lorand University, objected to Lakoff’s criticism of Hungarian government policies. Lakoff explained that the two academics remain friends because they both understand how important it is to be conscious of our own thought patterns and to exchange views.

“It is crucial for progressives to talk to people who are partly progressive,” Lakoff said. “It’s important that we make the unconscious conscious. It’s important to know why we have different views, to stop the war and have a discussion about why we believe it, even if the other’s views go against our deepest moral sense… Without that, you won’t get reconciliation.”