Although energy demands in Europe are not predicted to rise significantly in coming years, utility costs have been a major source of political angst and power in Hungary, Bulgaria, and other neighboring countries. The gas disputes from 2006-2009 between Russia and Ukraine which led to shortages or complete shut-off of services to many European nations, led leaders to begin thinking of alternatives. However, proposed pipelines have also been hampered by market and political issues. On Oct. 4, CEU's Center for EU Enlargement Studies (CENS) hosted a conference titled “The End of the Pipeline Saga? Southern Corridor and South Stream in the Making” to discuss these vital issues. 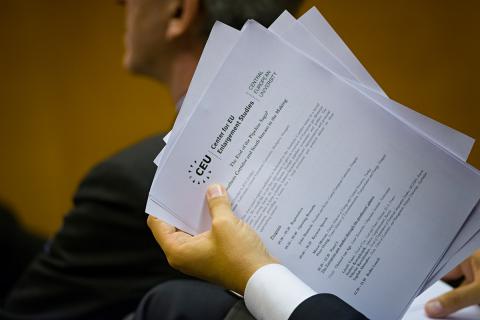 Representatives from user and supplier nations attended the Oct. 4 CEU conference titled “The End of the Pipeline Saga? Southern Corridor and South Stream in the Making.” Image credit: CEU/Daniel Vegel
CENS Director Peter Balazs noted that three important supplier countries were represented directly at the conference: Turkey, Azerbaijan, and Russia, as well as six consumer countries, which provided a good overview of the gas market. He concluded with the reminder that the new EU Energy Commissioner (who will take office in 2014) will have a limited budget, based on the agreed 2014-2020 Multiannual Financial Framework, with which to manage opportunities for the EU.

The conference was made possible by support from OVB Vermögensberatung. The full event report is available here: https://cens.ceu.hu/sites/default/files/field_attachment/news/node-38084/The%20End%20of%20the%20Pipeline%20Saga%20-%20EVENT%20REPORT.pdf