As historical periods transition, there is a time when they overlap and hybrid languages and texts reflect the collision of languages and customs. Noted British historian Peter Burke gave a series of lectures the week of Nov. 11 on this hybridization as part of CEU's annual Natalie Zemon Davis Lecture Series.

In his second lecture, titled “Hybrid Languages and Literatures,” Burke spoke about the humorously named Macaronic Latin, which was a combination of Latin and a number of vernacular dialects. Many Renaissance scholars championed the use of pure Latin and were critical of Medieval Latin, calling it “Kitchen Latin,” or “Polluted Latin.” However, as Burke noted, it was impossible to write about contemporary or foreign things like gun powder, the printing press or Islam in classical Latin. “How do you write in classical Latin about things that were totally unknown to the Romans?” Burke asked.

As Romance languages like Italian, French, and Spanish are Latin-based, Macaronic Latin 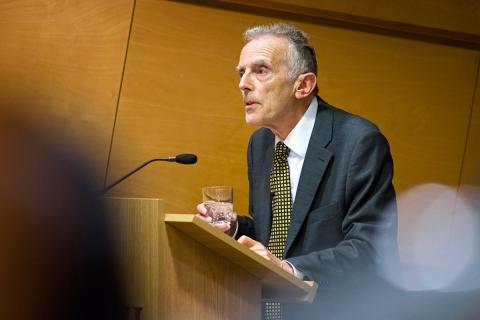 was easily mixed with them. “Eventually this is written down and other dialects are used and this spread beyond Italian to French and Spanish. Mixing with other languages is not so easy but people did it, for example, in German. Farther east, it was only in the 18th century that the Croats and Czechs began to write in this Macaronic form. In Poland, this was employed during the Renaissance.”

Burke discussed the four basic components of Macaronic Latin which involved “stealing” from Latin itself, reviving ancient words to enrich the vocabulary, borrowing from Italian (due to its prestige during the Renaissance) and, finally, as the world expanded, using exotic words from other languages including African languages, Portuguese, and English.

French Renaissance writer Francois Rabelais had “great skill at mixing languages for comic effect,” said Burke. Well-known British poet Edmund Spenser (best known for his epic poem “The Faerie Queen”) was so fond of using medieval words that he would often publish accompanying glossaries for contemporary readers who would not have been familiar with many of them. Shakespeare also liked to play with words and resurrect archaic terminology. Even the popular novel “The Ingenious Gentleman Don Quixote of La Mancha” is a hybrid of Spanish and Arabic cultures. Burke noted that, like the popular belief that Muslim prophet Mohammed has a mole on his right shoulder blade, so too does Don Quixote.

“The literature of the Renaissance offers many examples of hybridization,” Burke said. “The Classical co-existed with what I'm calling the Gothic. At the same time, some writers are trying to imitate Cicero and Virgil and some, the romances of chivalry – of knights and ladies. The co-existence of the Classic and Gothic styles led to what some critics call 'generic hybridization.'”

This literary hybridity was not just limited to modern-day Europe; it ultimately extended to “the frontiers of Christendom,” with Turkish words entering into Polish and other Slavic languages. In Spain, there is a long tradition of Arabic words being adopted into Spanish. Burke also cited the cross-cultural examples of the trickster, a literary character that often swindles or deceives. 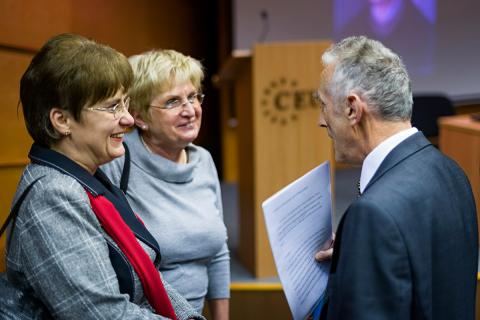 He explained that hybridization could cause social and cultural tension. For example, in Spain once the last Muslim kingdom fell in 1492, some felt that hybrid languages and literature were impure. Regardless of their reception, hybrid art, literature, and languages of the Renaissance remain and provide a glance into eras blending into one another.

The Natalie Zemon Davis Lecture Series is sponsored by CEU's Departments of History and Medieval Studies. Given the interest in cultural hybridity long shown by Zemon Davis, this theme allowed Burke to pay homage to Davis' work as well as to explore what was, for long period, a neglected theme in Renaissance studies. Burke retired in 2004 but remains a fellow of Emmanuel College and the British Academy. For more information on Burke's talks, visit http://history.ceu.hu/events/2013-11-11/annual-natalie-zemon-davis-lecture-series.