“The way I expect universities to behave is to constantly look for new ways of understanding reality,” CEU Founder and Honorary Chairman George Soros said at the launch of the Hungarian translation of his book “The Soros Lectures: George Soros at Central European University” on Nov. 27. “I hope that CEU is doing that already and will do it even more... I think CEU is now mature enough that it can be at the cutting edge.”

The release of Soros’ book in Hungarian extends the reach of his theory of reflexivity and the concept of open society to the Hungarian public. His theory of reflexivity contrasts with the standard assumption in classical economics that people act rationally, urging that more attention be paid to the uncertainty, the unpredictability of human behavior and how this behavior actually reflects on and influences events.

“The fact that people base their decisions on a biased view of reality is nothing new,” Soros said. “The fact that this bias interpretation actually can affect the reality which it’s supposed to reflect is the additional and very important change… There are social interactions where what you think affects what other people think, and what you do affects what other people do.”

The book, published in English by PublicAffairs in 2010 and by Scolar Kiado this year in Hungarian, is a compilation of Soros’ thinking on economic politics as described in five public lectures named after CEU in 2009. 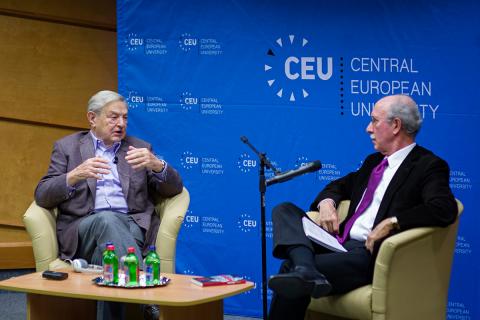 “The lectures are about the meaning of open society, which is the hallmark of his entire career as a philanthropist,” CEU President and Rector John Shattuck said at the event. “They’re also a commentary on world events and a look to the future.”

Regarding the latter, Soros expressed optimism about the situation in the Middle East, although the Syrian humanitarian crisis will not be aided by a political solution, he said. Soros recently announced he’s donating $1 million to help the International Rescue Committee with humanitarian efforts in Syria, describing the crisis there as a glaring failure of international governance.

Russia was able to successfully confront a war-weary U.S. in Syria for a solution to the chemical weapons issue, Soros said. Iran, meanwhile “also wants to rejoin the civilized world because the regime itself is very weak.”

Soros was far less optimistic about the situation in Europe.

“The euro crisis is a black hole,” he said. “It’s really a nightmare what’s happening in Europe, which is after all the most developed democracy, open society in the world. It’s self-inflicted misery getting deeper and deeper. There, I’m less hopeful.”