Giving a broad history of his country, Indian Ambassador to Hungary and Bosnia and Herzegovina Malay Mishra lectured on “Contemporary Dimensions of India's Foreign Policy” at CEU's first Ambassadorial Lecture Series event of 2014 on Jan. 21.

Mishra explained that India's overall foreign policy is based on democratic tenets that affect both the residents of India and its “neighborhood.” Internally, India seeks to “safeguard people's interests and their socio-economic development.” Outside the sub-continent, India “champions the cause of the South-South Coop,” or the Global South – mainly Africa, Latin America, and developing Asia – as it is more popularly known.

India was first country within the British Empire to gain independence but not long after, itwas caught between the U.S. and the Soviet Union during the Cold War. India's first prime minister, Jawaharlal Nehru, along with leaders of countries, formed the Non-Aligned Movement (NAM) in 1961 to strengthen relationships between developing nations and avoid being entangled in the Cold War.

Able to temporarily avoid the Cold War, India did engage in the Sino-Indian War with China in 1962. The war over territory shattered Prime Minister Nehru's confidence. “It was a war with no victory for the Indians,” Mishra said. “This was a turning point for India foreign policy.”

The mid-1960s ushered in the era of Nehru's daughter, Prime Minister Indira Gandhi, who 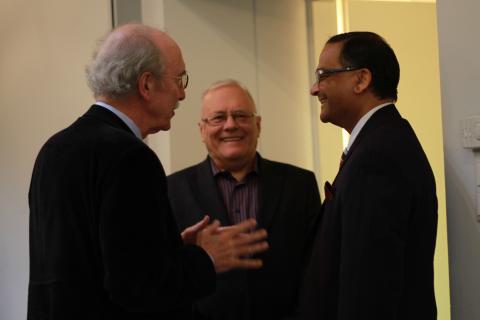 “had to deal with the Cold War powers.” Mishra explained that Gandhi had to ally with the Soviet Union (by way of the Indo-Soviet Treaty of 1971), following the Bangladesh Liberation War of Dec. 1971 and bitter experience with the U.S. support of Pakistan in that conflict. “India then slipped into isolation, as it was viewed as part of the Soviet Camp.” Indian educational systems and infrastructure were largely developed with Soviet support, he said.

The 1980s and 1990s held major change for the nation. Prime Minister Rajiv Gandhi, the son of Indira Gandhi was the first to reopen the Indian embassy in China, after years of non-existent diplomatic relations, following the Sino-Indian War. Importantly, under (Rajiv) Gandhi's leadership, India co-founded SAARC, the South Asian Association for Regional Cooperation, which was the “beginning of India's neighborhood policy.”

Sadly, Rajiv Gandhi was assassinated in 1990, but India's outward-looking foreign policy continued to grow. As the Cold War ended, the era was marked by the opening of the economic system (a shift from Soviet-style state control), liberalization, and reforms. The early 1990s saw India embracing a “Look East Policy,” Mishra said. This “aspirational” foreign policy helped India find a “new voice.” Into the 2000s, there was a conscious shift to multilateralism with participation in major global partnerships like ASEAN, ASEM, and the G-8 (later G-20). Still, India's status doesn't change the problematic internal issues it faces as well as those in neighboring countries like Afghanistan that have been ravaged by war. India also has longstanding tensions with its closest neighbor, Pakistan. “Managing a neighborhood has been India's biggest foreign policy challenge,” Mishra noted. “Our neighborhood is challenging.”

The late 1990s and 2000s also ushered in the emergence of India's global profile and a major economic boom. Still focusing on relations with nearby countries, today India is also firmly established as one of the major emerging global powers in the so-called BRICS (Brazil, Russia, India, China, and South Africa) alliance. BRICS is the first such partnership to bring China and India together in a closed-group setting and it has produced significant deliverables in a very short span of time that include multilateral banking and investment options, all independent of the U.S. dollar or euro.

“India's growth story is not to be taken for granted,” Mishra said. “Still, India has to earn her place in an extremely complex and multipolar world.”

CEU President and Rector John Shattuck introduced the ambassador and noted CEU's close ties to India, the world's largest democracy. India is in the top 25 countries from which CEU students come and the University has a number of academic partnerships with Indian institutions, including the just-completed €2.37 million EU-funded collaborative research project (7th framework) titled "CORE: Governance and Conflict Resolution: Assessing the socio-economic and political impact of governance initiatives on conflicts in India and Europe." Peter Balazs, the director of CEU's Center for EU Enlargement Studies moderated the discussion.