“What does it mean to be gay when it means you aren't considered a 'real' Hungarian?” asked CEU Assistant Professor of Gender Studies Hadley Renkin, whose work focuses on post-socialist sexual politics and sexuality's implications for changing conceptions of citizenship. Renkin, an anthropologist, is currently examining the dramatic rise in public homophobia in Central and Eastern Europe, which has led to violence and cancelation of Gay Pride events. In 2007, after ten years of sporadic and peaceful opposition, right-wing nationalists violently attacked participants in the Budapest Pride March. Belgrade's Pride March turned bloody in 2010, with clashes between anti-gay protestors and the police. And, now, as Russia prepares to host the Winter Olympic Games, mainstream news has largely focused on the country's recent anti-gay legislation and intolerance, instead of the Games themselves.

CEU's Renkin has studied the LGBT (Lesbian, Gay, Bisexual, and Transgender) movement in Hungary, which began underground while Hungary was still under socialism. “We think of gay and lesbian culture as new, post-socialist thing but, it really has a long history,” he said. As far back at the 1930s and 1940s, there was a documented gay culture in Budapest. When communities began to form, it wasn't obvious to “outsiders,” who weren't a part of the gay scene. “There were particular restaurants and coffee houses where you could go as well as some of the baths,” he said. “These were intensely influential scenes – social communities where friendships were made and ideas exchanged.”

As Western culture leaked into former socialist countries, so too did ideas and information about organizing for change. In the late 1980s, gay social communities became more organized and started to have critical conversations that led to the formation of organization that were the forerunners of today's Hungarian LGBT movement. The end of socialism meant a new beginning for some marginalized groups. “When the wall was falling, many people saw it as a new beginning – the possibility of shaping a new society that could provide public spaces for citizens who hadn't had such spaces before,” Renkin said. In the early 1990s, Hungary's first LGBT social and political groups ultimately splintered into several others with different goals. One group published Hungary's first men's magazine, “Masok” (Others) while another, Hatter Tarsasag a Melegekert (Background Support Society for Gays), offered an LGBT telephone helpline. In 1997 the Labrisz Leszbikus Egyesulet became Hungary's first organization to support lesbians.

It's important, Renkin argues, to trace the political and societal changes in the country 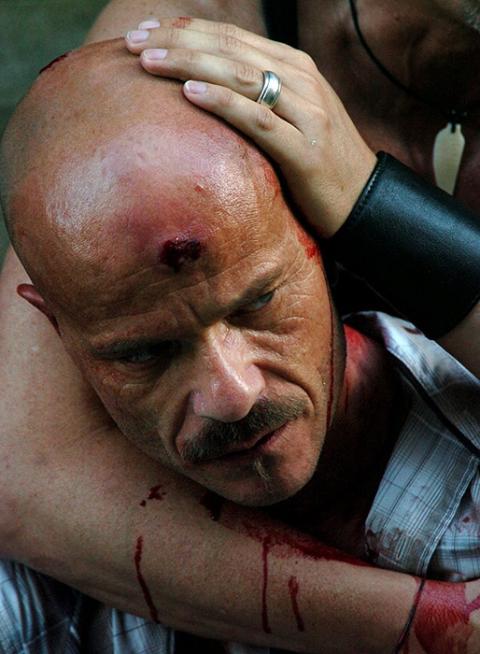 that led to this unbridled violence. In the mid-2000s, Hungary, like other nations in the region, was experiencing the rise of a powerful right-wing movement that not only resulted in significant representation in the Hungarian parliament (the Jobbik party) but, especially after 2006, demonstrations of public force in the streets and the countryside, where so-called vigilantes have attempted to enforce justice as they see it. Their victims continue to be those from marginalized populations: gays, Jews, and Roma. This transformed Hungarian sexual politics: there was little overt opposition to Budapest's Gay Pride March (which had already been staged annually for a decade) until 2007, when counterdemonstrators became violent. Anti-gay, nationalist protestors – some giving the Nazi salute and screaming homophobic slurs – attacked Pride marchers with eggs, bottles, rocks, and smoke bombs. Eleven Pride participants were beaten, two so badly that they required hospitalization.

Cultural-political reasons and, perhaps surprisingly, linguistic semantics also lie behind these tensions. Having borrowed a lot of the Western framework for LGBT politics, the Budapest organizations also adopted the common name for their public parades: Pride. However, the Hungarian word for pride “buszkeseg” has a number of connotations, some of which are closely aligned with Hungarian nationalism. For nationalists, pride in “traditional Hungarian values” is a good thing and essential to their movement, Renkin explained. In their view, however, LGBT Pride is precisely “the wrong kind of pride”: a foreign importation (“buszkeseg” has also been interpreted by nationalists as meaning “arrogance”; it doesn’t help that it is also the Hungarian word for the Biblical sin of “pride”). These conflicting meanings of words, and the identities associated with them, have intensified tensions both outside and within LGBT community over the March. 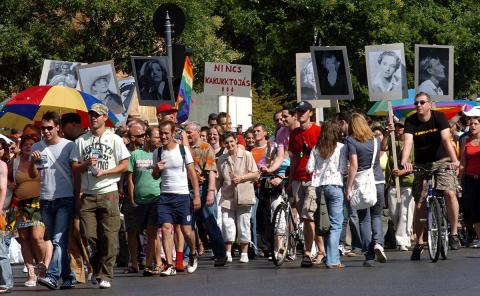 With so much controversy over the word and after the devastating violence of 2007, organizers decided to change the name of the parade to the Gay Dignity March (Meleg Meltosag Menet) in 2008. In Hungary, “emberi meltosag” [human dignity] is the basis of human rights, Renkin found in discussions with LGBT activists. In this way activists sought to highlight commonalities and equality, not to claim rights based on difference, and to work more closely with other local, national, and international minority rights groups.

Despite this, in the years since the 2007 attacks, security has been tightened at the Gay Dignity March and, in fact, the parade route is cut off from spectators and guarded by police in full riot gear. Every year the marchers are met with counterdemonstrators and, in 2011, the parade route itself was cut short by police due to counterdemonstrations in key public spaces such as one of Pest's main squares, Deak ter, and on the square outside the Hungarian Parliament.

The ongoing issues of belonging – of nationality and sexual orientation – that face those in the Hungarian LGBT community have not been solved by clinging to the Western construct of Pride, nor have they been alleviated by adopting the politics of “Dignity.” In fact, Renkin notes, in the face of ongoing opposition and threats of violence, and in an atmosphere of continuously increasing national rhetoric, the public space and voice of Hungary’s LGBT community may in fact be shrinking both physically and symbolically.