Everything is Somewhere, Says Google's Parsons

“We’ll never feel lost anymore,” Google Geospatial Technologist Ed Parsons hypothesized in his lecture titled “Mapping the World from Pizza to Portal “ at CEU on Feb. 6. Parsons talked about how mapping has changed in the past 10 years and offered a vision of how maps could shape our future.

In the 1920s a lady compiled the first A-Z street map of London by walking the streets of the city and taking notes. The ambient maps of today not only help users get from A to B but make exploring the world from an armchair possible. Parsons claims “smart phones are smart because they have maps on them.” As one-third of the things people search for has a geographical element, Google can use geography as a filter to present information that’s most relevant to who we are and where we are.

When Google Maps started out in 2004, it was called Google Local and it searched for things local to its users. Users had to type in what they were looking for and where they were looking separately. The information was then displayed on a small Map Quest map. By now, Google Maps has become a much richer and personalized program. The map you see when logging in with your Gmail/Google account is personalized based on where the user and his or her friends have been. No two people see the same map. Today, Google Maps generates about 1 billion individual maps per month. Part of that huge number is due to the fact that Google Maps is embedded on other websites. 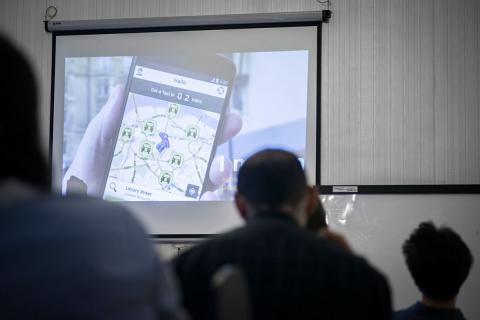 Google Maps is very task-oriented - users want to know where something is or how to get somewhere. The less formal way maps are used is for exploring. Google Earth is based on our need for exploration, however, when people use Google Earth for the first time, they often zoom in on their own house. “By making data more accessible, you can still make discoveries,” Parsons said. He recalled a story about a Google Earth user who discovered a thus-far unknown area of the rain forest from his armchair.

The vast majority of images used by Google Earth come from aerial photography. As technology allows for Google's Street View to eye cars, tricycles and even smaller objects, it can also provide 3-D images from the inside of buildings and even otherwise inaccessible mountain trails. Google now provides a sense of place, “the final zoom from space to a street corner.” With community cartographers, intelligent devices, apps that give real-time geography-based information, and games that compel users to go out and explore the world around them, Google Maps is preparing for a future when it won’t only converse with users, but will anticipate their needs. "The map of the future is no map,” Parsons predicted.

Parsons is based in Google’s London office and is responsible for furthering Google’s mission to incorporate geography into everyday life.