Before Croatia was a member of NATO and the EU, the country's foreign policy goals were singularly focused on gaining that membership, said Senada Selo Sabic, research associate at the Institute for Development and International Relations in Zagreb. Her March 3 lecture at CEU focused on where the country is now that is has gone from aid recipient to contributor.

Sabic detailed the three main elements that Croatia's Ministry of Foreign Affairs is currently tackling. First, is the normative phase that finds the country adjusting to its role in the EU.

“If you manage to get inside, you have to be a respectable partner and one that can contribute to the extent that you can,” Sabic noted. “Croatia sees the possibility now; it has to respond to and deal with issues that it didn't have to before. You have to invest in diplomats and professionals who can inform your policy and help your country to contribute within the EU.”

One contribution that Croatia is proud of, Sabic said, is its niche specialization of post-conflict stabilization and state-building, resulting from its own experiences after the fall of 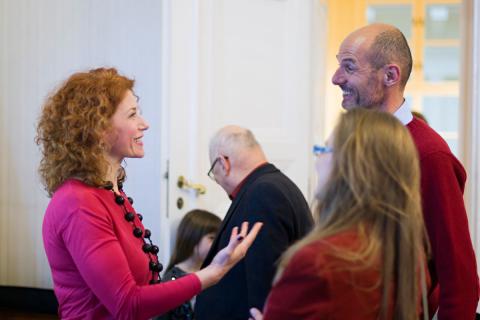 communism and the devastating Yugoslav Wars in the 1990s. Although Croatia's monetary contribution to the EU is small when compared to some other member states, the money partially goes to efforts that have been identified as EU priorities. For example, Croatia's expertise and money supports the education of girls in northern Morocco and Afghanistan and has also assisted in setting up a framework for community dialogue in Palestine. “This all happens through the conviction of Vesna Pusic, the current foreign minister, who is liberal and believes in these values.”

The second priority for the Croatian Foreign Ministry is economic diplomacy. Diplomats are tasked with promoting Croatia as an investment-friendly country to foreign entities. Sabic noted that the country is still in financial crisis and that there is negative economic growth, a decline in the standard of living, and a large number of uneducated people. Some internal improvements are visible, she said, like more transparency in the Office of the Finance Minister and upgrades in the tax collection system. Unfortunately though, the The Ministry of Regional Development and EU Funds “hasn't been able to deliver very well.” 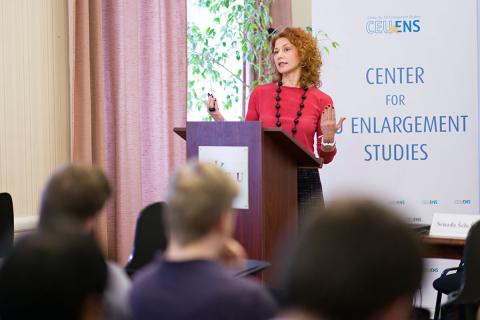 Lastly, and perhaps most importantly, is Croatia's relationship with its neighboring countries. Relations between countries of the former Yugoslavia are complex and sometimes hostile. There are many open issues, for example, between Croatia and Serbia and between Croatia and Bosnia-Herzegovina. Both Croatia and Serbia have pending cases of genocide from the wars in the 1990s against one another at the International Court of Justice, although Sabic noted that legal experts say that neither side has a solid case. Both Croatia and Bosnia-Herzegovina are signatories to the Dayton Peace Agreement that ended the Bosnian War in the mid-1990s and the 1994 Washington Agreement that settled territory disputes between the warring countries. However, there have been recent trade issues and difficulties for the Croatian minority living in Bosnia-Herzegovina and vice versa.

“Croatia claimed – prior to joining the EU – that it knows Balkan countries best and claimed to be a bridge to other countries in the region. Whether or not this will take place, who knows?” Sabic questioned. “Croatia definitely has conviction that this is what should be done and parliament is committed to upholding EU values with its neighbors no matter what. It will not use bi-lateral issues to block any Balkan countries from trying to join EU.”

There are opposing viewpoints regarding how Croatia should move forward in terms of its neighbors and the foreign minister promised to support and give advice on how to approach Bosnia-Herzegovina, but a proposal has yet to surface. Sabic said, however, that Croatia is invested in Bosnia-Herzegovina being stable.

“Some say we should look in the other direction, only toward Europe,” Sabic said. “This is not because we don't care, but because it can easily slip into failure and conflict. And there are those who argue that Croats are the people to lead in this [Balkan issues] as the neighbors who joined NATO and the EU first.”

Sabic works as a research associate in the Institute for Development and International relations in Zagreb. Her research areas are Croatian foreign policy, Western Balkans and Turkey, EU Enlargement, development cooperation and migration. She is editor-in-chief of the Croatian International Relations Review and the external teacher at the Faculty of Political Science, University of Zagreb. The event was sponsored by CEU's Center for EU Enlargement Studies (CENS) and the conversation moderated by CENS Director Peter Balazs.