Democracy Is A Process, Azzellini And Sitrin Say

”We’re in a new historic epoch. The world is in movement, societies are in movement,” said Dario Azzellini and Marina Sitrin in their lecture on new global movements and democracy on March 26.

The activist couple have participated in a number of movements and demonstrations all around the world. Sitrin and Azzellini talked about what they found was common in the “second wave of the anti-representational protests” after 2011. 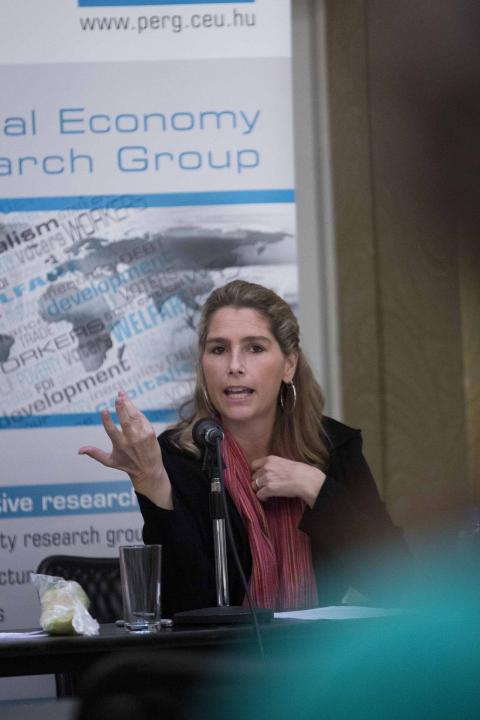 Recent demonstrations all over the world have been tied together by the same slogans. People shouted “Enough” in Spanish, Greek and American English, together with “They can’t represent us! They can’t even imagine us!” in Russian.  The power and hierarchy in representational democracies are rejected. People come together and decide for themselves what they want to do.

Continuing with the common elements of recent uprisings, Azzellini and Sitrin pointed out that the early initiators tend to come from a middle-class background. Many of them are young people who realize they won’t find proper jobs in the current economic climate. Also, recent movements reject political parties, and are horizontally organized. Sitrin  shared her personal experiences about how people engage with one another without having power over one another, and use a global language. Appreciation and clapping are expressed with similar hand gestures all around the world, and the “people’s mike,” repeating what you hear to others farther away from the speaker, facilitates a deeper interaction between members of the movements. 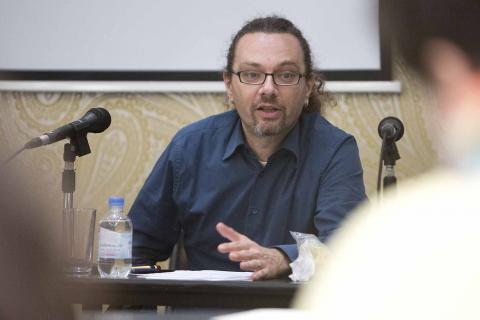 “Representational and liberal democracies do not feel democratic to the people,” Azzellini and Sitrin  explained the common origins of recent movements. Democracies didn’t fulfill what they promised, and people don’t have a say in what happens in their life. However, liberal democracies never meant to be democratic in theory. They were designed to make decisions easier, and to limit participation in politics. “You elect your representative and have nothing more to do with policy. Liberal democracy was, for a long time, the frame in which rights were gained. Now it’s the space in which we struggle for our rights not to be taken away. In liberal democracies, democracy is the result of a struggle. In movements, democracy is a process,” Sitrin and Azzellini concluded.

Dario Azzellini is assistant professor in sociology at the Johannes Kepler University Linz (Austria). He is the author of several books and documentaries on movements, workers control, Private Military Contractors and Venezuela.

Marina Sitrin is a sociologist, lawyer and fellow at the CUNY Graduate Center in New York (USA). She has participated in and written about the new global movements.

The event was sponsored by the Political Economy Reasearch Group.