Are There Any Limits for Enhancement in Higher Education?

May 13, 2014
News
Center for Ethics and Law in Biomedicine
Human Rights Studies

CEU's Center for Ethics and Law in Biomedicine (CELAB) hosted its second mobilization and mutual learning (MML) exercise under the ‘NERRI: Neuro-enhancement – Responsible Research and Innovation’ EU 7th Framework research project that aimed to explore the attitudes higher education students towards the enhancement of neuro-capabilities and capacities (e.g. cognition, memory, communications skills etc.) for the purpose of achieving better in school and in the workplace. The April 29 event was also an opportunity to examine participants' understanding of the social, ethical and economic implications of non-therapeutic neuro-enhancement.

After the presentation of the winners of the national essay competition “Neuro-enhancement in education: how far would you go to achieve your best?”, the second MML meeting started with screening an excerpt of the movie “Limitless” by Neil Burger. Based on Alan Glynn’s novel “The Dark Fields,” the film’s tagline: “What if a pill could make you productive, rich and powerful?” served as a conversation starter. CELAB Director Judit Sandor moderated the ensuing debate, with the participation from Attila Gulyas, associate professor at the Department of Cellular and Network Neurobiology at the Institute of Experimental Medicine in Budapest and Jozsef Kovacs, deputy general director of the Institute of Behavioral Sciences at Semmelweis University, students, and the general public.

Discussing how far we are from the possibility of taking a pill that enables us to use the full capacity of our brain, the kind of enhancement depicted in the film, Gulyas noted that this concept has already been exceeded. Amphetamine was used by the Allies during World War II to elevate morale. He said the brain can indeed be enhanced, but the question is whether we’re willing to pay the price of such newly acquired knowledge. Gulyas dismissed the popular “we only use 20 percent of our brain capacity” argument, and stressed that learning is a highly structured process.

Kovacs compared the issue of biological enhancement to a deal with the devil, saying “We don’t know where this experiment would lead.” He also warned that if rich societies could produce genetically enhanced people “biological equality would end.” 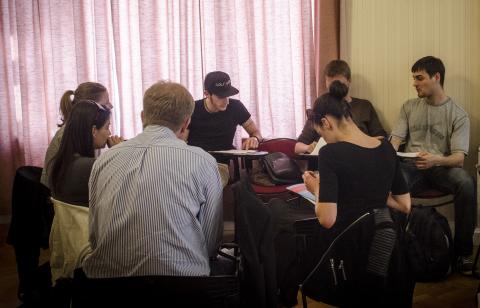 The questions of ownership and competition were raised several times during the discussion. Sandor pointed out that, in the film, enhancement was a means to becoming more successful both financially and socially but becoming a more empathic, more altruistic person was never high on the protagonist’s agenda. Gulyas noted “man is fundamentally high-functioning” and that competition is the result of evolution. Reflecting on whether enhanced skills are still our own skills, he suggested that societies and people would remain the same, just as diverse as ever. Studies in the field show that people would be willing to experiment with enhancement but only to achieve specific goals and would draw the line at personality-altering enhancement.

The event was sponsored by CELAB and the NERRI Project.