As difficult as it is to confront the evils of the Holocaust, education is often the key to shedding light on hatred and prejudices and can be vital to preventing future genocides and mass atrocities. Global experts convened at the June 10-11 conference “The Future of Holocaust Memorialization,” organized by CEU, University of Victoria, and the Tom Lantos Institute and included the following sponsors: the embassies of the United States, Norway, and Sweden, the Israeli Cultural Institute, Friedrich Ebert Stiftung, and the iWitness Holocaust Field School Project. The event was part of CEU's continued public discussion of the Holocaust with the aim of preserving and honoring the historical truth.

President and CEO of the Tom Lantos Institute Anna-Maria Biro, who co-organized the conference with Andrea Peto of CEU's Department of Gender Studies and Helga Thorson of 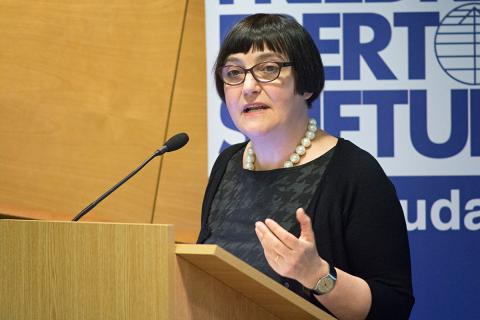 the University of Victoria, opened the event by underscoring the work of conference participants to confront racism, anti-Semitism, and homophobia through memory work. The opening panels dealt with current Holocaust discourses and how various institutions present Holocaust education. Subsequent panels explored numerous initiatives that are educating students, the public, and even civil servants.

Emphasizing the importance of the event, CEU President and Rector John Shattuck spoke of his personal experience with contemporary genocides. Shattuck, while serving as U.S. Assistant Secretary of Human Rights, Democracy and Labor, was the first international diplomat to reach survivors of the July 1995 Srebrenica genocide in Bosnia and helped establish the International Criminal Tribunals for both Rwanda and the former Yugoslavia.

“In Rwanda and in Bosnia, there were ordinary people who stood up to evil,” said Shattuck. “There were Serbs whom I met who hid and sheltered Bosnian refugees, there were Hutus whom I met who refused to participate in the killing of their neighbors. So I think the goal of this conference is to keep alive the memory and the legacy of such people – such ordinary people who resisted evil in brave and ordinary ways and who teach us what Holocaust education should be all about.”

In the U.S., the premiere center for Holocaust education is the U.S. Holocaust Memorial Museum, a federal institution that has hosted over 40 million visitors in its two-decade history. Paul Shapiro, director of the Jack, Joseph and Morton Mandel Center for Advanced Holocaust Studies at the U.S. Holocaust Memorial Museum, noted that the fact that the museum presents not only the persecution of the Jews but also what was done to all the other victim of the Nazis and their allies makes it clear to visitors that every person can be a victim of persecution. 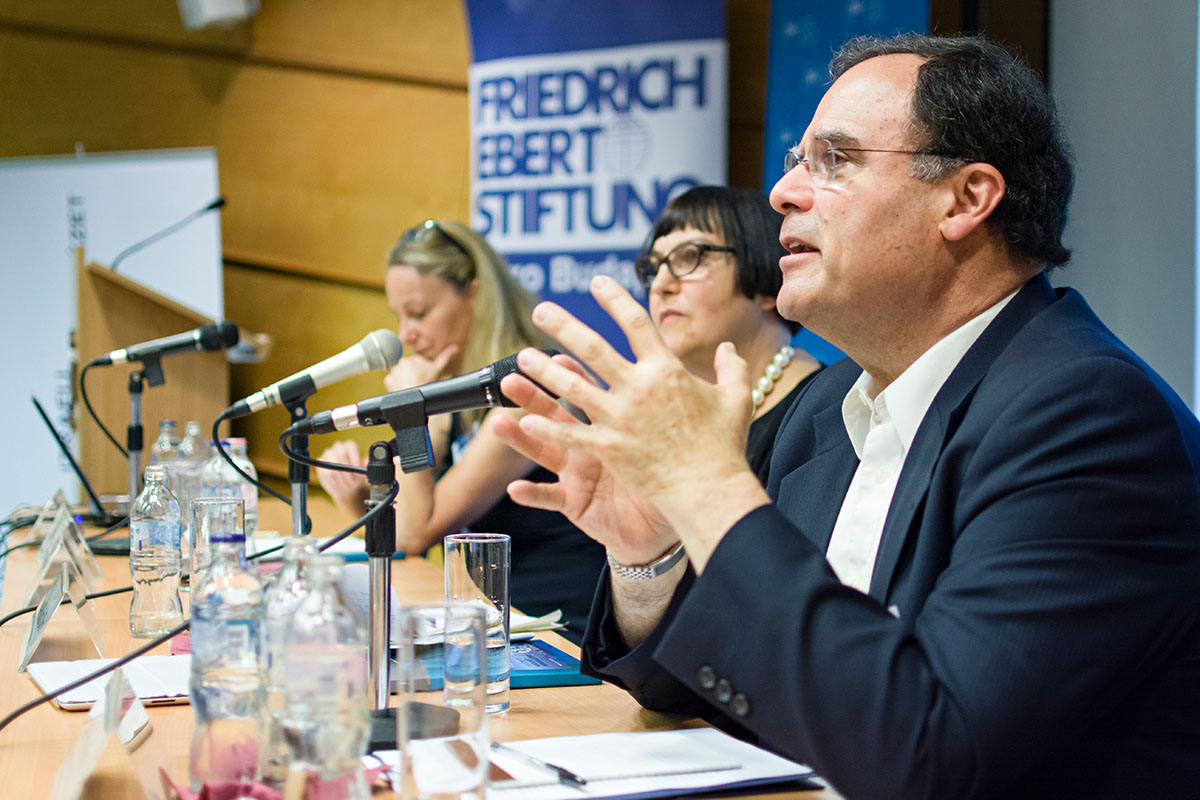 “Holocaust education and memorialization also reveals the speed with which it was possible for an educated society, and with it an entire continent, to abandon all of the ethical norms and values established over a 2,000-year history of civilization,” Shapiro said. “That warning is one that those of us fortunate enough to live in democracies need to hear. Holocaust education can provide a shield against extremism and authoritarian tendencies that often appear first as limitations on free media and free expression, as challenges to the independence of a state's judiciary, as a reduction of the security or sanctity of one's home or workplace, or as 'reform' of electoral procedures in order to favor certain outcomes.”

The ambassadors of Norway and Sweden expressed concern over growing xenophobia, racism, and anti-Semitism in their own countries and the whole of Europe. “We must work hard to maintain tolerant societies,” said H.E. Tove Skarstein, Ambassador of Norway. “We must not repeat the mistakes of Europe in the 20th century. We must make sure that future generations understand the consequences of this.” Chargé d’Affaires of the Embassy of the United States of America Andre Goodfriend echoed the ambassador's comments saying, “Those who can remember honestly, without acrimony, with clear eyes...those who can commemorate are truly able to face the past, and they are able to help time heal the wounds and build a healthy future.”

In the following sessions, speakers delved into concrete, successful local initiatives in Holocaust education and memorialization. Co-organizer Helga Thorson of the University of Victoria looks at it as “think[ing] about the present through the lens of the past” to, hopefully, “secure a future beyond hatred, violence, and genocide.” Spurred by alarming surveys revealing large percentages of Hungarian people with anti-Roma and anti-Semitic leanings, Professor Ildiko Barna of Budapest's Eotvos Lorand University (ELTE) conducted a case study through which she developed curriculum on the background and social consequences of hate crimes for students of military sciences,
public administration and law enforcement. “These students are likely to encounter hate crimes – especially those in police force,” Barna noted.

John C. Swanson, now a professor at University of Tennessee Chattanooga, guided Utica College students in the making of a documentary film about how the Holocaust is taught in public high schools in New York state. The students found that the Holocaust is often portrayed as something unique and inexplicable, whereas Swanson emphasized the necessity of placing the Holocaust in historical context. “History is not driven by forces beyond our control,” said Swanson, whose students’ film was entitled “Never Again: Lessons from the Holocaust.” “We must emphasize chronology, change over time, historiography, and the narratives.”

At the University of Victoria, British Columbia, Thorson and Andrea van Noord developed the I-witness Field School program http://web.uvic.ca/~iwitness/ to help build a way to keep a connection to the past in the future as the survivors disappear. The students spend a month in Central Europe speaking with survivors, studying monuments and visiting museums, and connecting with European students to discover the different ways the Holocaust resonates among people, cultures, and generations. “Holocaust education must aim to be intergenerational, intercultural, and introspective,” said Thorson, head of the Germanic Studies Department at the University of Victoria.

In Vienna, a resident of a small street called Servitengasse, Barbara Kintaert, discovered that over half of the inhabitants of her building in 1938 were Jewish. She began investigating their fates, in a project called Servitengasse 1938, www.servitengasse1938.at which has memorialized victims, contacted survivors and brought them back to the street for poignant encounters with their former homes. 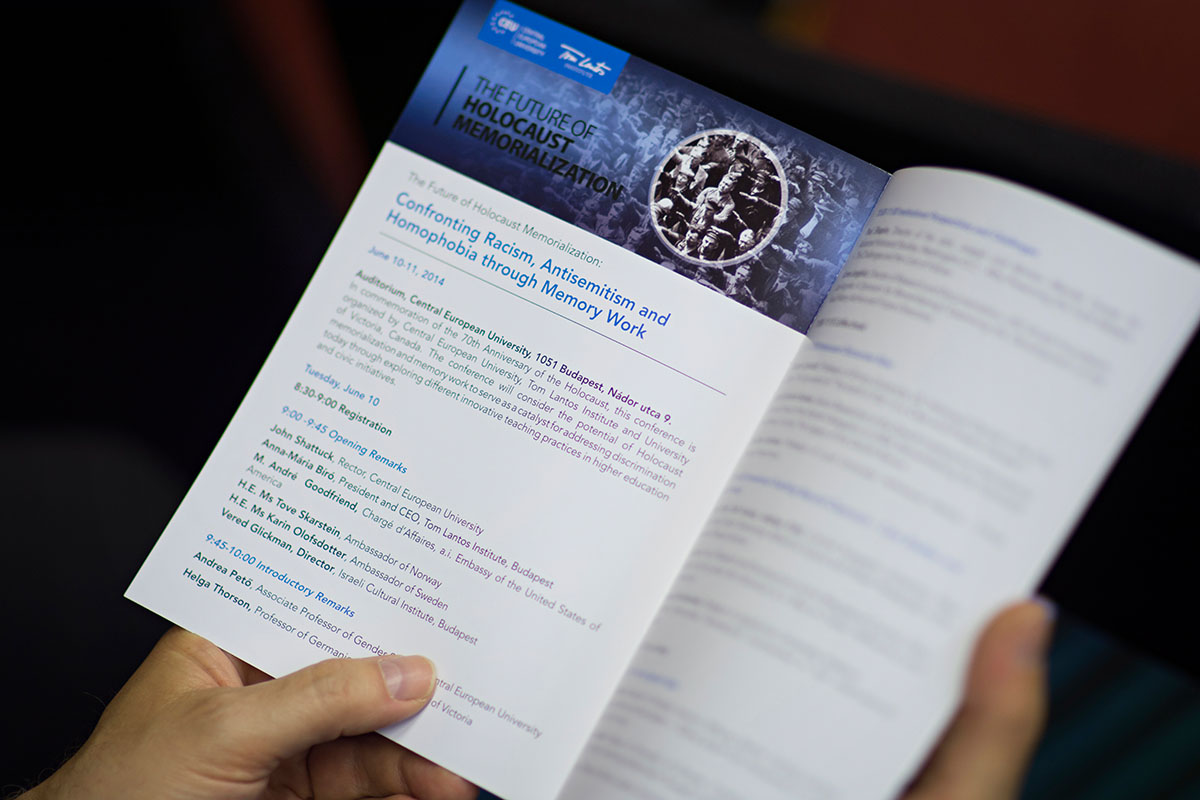 In the final session, participants heard from Gabor Kalman, maker of the film “There Was Once...” and himself a Holocaust survivor. He spoke about the challenge of interviewing survivors, who exhibit a range of reactions to requests for interviews, from outright rejection to gratefulness. He urged patience and recommended ignoring any divergence from the facts. “If you’re interviewing survivors, respect what they remember,” he said. “That’s the memory they live with – it’s theirs.

Another filmmaker, researcher Borbala Kriza of ELTE in Budapest, focuses on bystanders, non-Jewish witnesses, whose stories have largely been ignored. Her project systematically collects testimonies from all over Hungary, which reveals new evidence of events that were left unrecorded – a massacre of several hundred people, a mass grave near the Danube, killings in the streets of Budapest. Professor Annamaria Orla-Bukowska of Jagiellonian University, Krakow focused on non-Jews known as “Righteous Among the Nations.” Some 25,000 people have been honored by Israel for risking their lives to save Jews during the Holocaust. “Ultimately human rights are only guaranteed by other human beings as individuals, not institutions and governments,” Orla-Bukowska said. “Neutrality in a time of genocide always helps the perpetrators, never the victims.”

The conference concluded with remarks by H. E. Ilan Mor, ambassador of Israel to Hungary, who referred to the troubling Anti-Defamation League statistics on both the high level of anti-Semitic views worldwide, misconceptions about the Jewish population, and the level of complete ignorance about the Holocaust. Education is the key, he said. “Every project we have seen today is a stone in a long way. We must tell it again and again – bring our message of 'never again.'”

CEU was pleased to work with international co-sponsors to organize, host and fund this independent conference on Holocaust education.