Debating the Complicated Relationship between Science and the Law

The fourth workshop of the NERRI (Neuro-Enhancement: Responsible Research and Innovation) Project at CEU focused on sensory enhancement, the role of its legal regulation and the ways bioethics can help clarify the issue. Professor Judit Sandor, founding director of CEU’s Center for Ethics and Law in Biomedicine (CELAB) opened the discussion on October 10 stating that neuroscience ranks among the three major breaks in the ego of humanity, together with Copernicus’ model (that placed the sun instead of the Earth in the center of the universe), and the theory of evolution. 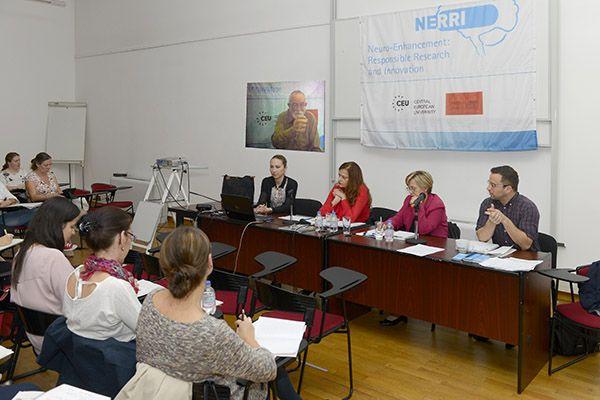 Three videos are presented to underline the fact that medical professionals are perplexed by the concept of neuro-enhancement.

Sandor described her experiences of the mutual learning process thus far, noting that there is still no consensus on how neuro-enhancement should be defined, let alone translated into Hungarian. The audience was shown three videos that underlined the fact that medical professionals themselves are perplexed by the concept of neuro-enhancement. In one of the videos Jozsef Kovacs, head of the Department of Bioethics and deputy general director of the Institute of Behavioral Sciences at Semmelweis University in Budapest, highlighted the difference between treatment and enhancement, noting that while treatments lead from sickness to health, enhancements enables perfection beyond the human condition. In another clip, Kovacs took this distinction further, saying that neuro-enhancement could allow for wealth to create a “biological inequality, with obsolete 'Trabant-bodied' humans, and enhanced, superhuman 'Audi-bodied' humans.” The Trabant was a much-derided car produced in the former East Germany. Csaba Pleh, founder and chair of the Department of Cognitive Science at the Budapest University of Technology and Economics, noted that the concept that the “hardware,” (the brain) that is being muddled with is left out of the neuro-enhancement argument. 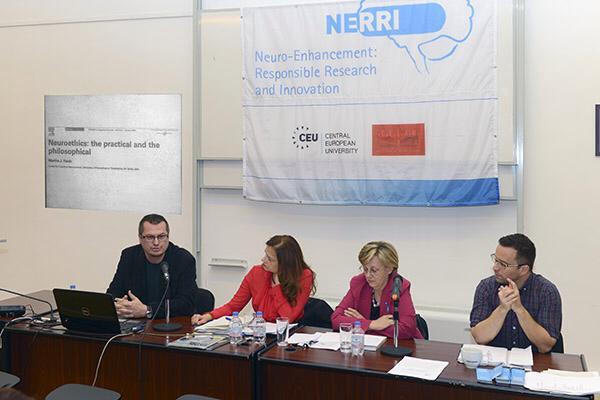 After the videos, philosopher Laszlo Nemes gave a short lecture on “Neuroethics and New Paternalism” and Marianna Nagy, deputy dean of the Faculty of Law at Eotvos Lorand University in Budapest, discussed the difficulties of regulating scientific results in particular and the relationship between law and cognitive science in general. Nemes discussed how the concept of free will and autonomy has changed through the history of bioethics, how it’s been affected by libertarianism and paternalism in the past few years, and how traditional Kantian ethics are in conflict with modern, more paternalistic ethics.

“The study of law is the most conservative science,” Marianna Nagy began her talk, noting that new approaches from various perspectives are need when creating legislation. The law does not reflect on psychology, cognitive sciences and the individuals’ decision-making processes, but presumes a direct timeline from decision to action, Nagy said. “The concept of causative action is completely different in the study of law and cognitive science.” Still, she warned against rushing the process of aligning the two, as science hasn’t yet reached the point when its results should appear in legislation, although they should be considered in jurisprudence. “We can’t not reflect and react to the results of cognitive science,” Nagy concluded.
The talks on the issues of decision-making, legislation and regulation generated a heated Q & A session with the participation of lawyers, economists, stakeholders, and interested parties.

For more information about the previous meetings, see