February 3, 2015
News
CEU Planet
Department of Economics and Business
The Office of the President and Rector
Economics

With the bond-buying program announced last month, the European Central Bank (ECB) has sought a middle ground between calls for more aggressive monetary easing and warnings against excessive measures, ECB council member and Austrian Central Bank Governor Ewald Nowotny said Feb. 2 at CEU. The program, meant to prevent deflation and stimulate the eurozone economy, should start to appear by mid-year, Nowotny said in a lecture hosted by the Rectorate and the Department of Economics.

“We have to contend with far-reaching divergence in theoretical and practical perspectives,” Nowotny said.  “The ECB has a middle-ground policy. It’s not as expansionary as the Fed, but not as restrictive as the BIS,” Nowotny said, referring to the U.S. Federal Reserve and the Bank of International Settlements.

The program involves ECB purchases of 1 trillion euros of government bonds to inject liquidity and keep consumer prices from falling. The ECB’s mandate – in contrast to that of the Fed – is price stability, defined as an inflation rate of close to but not above 2%. 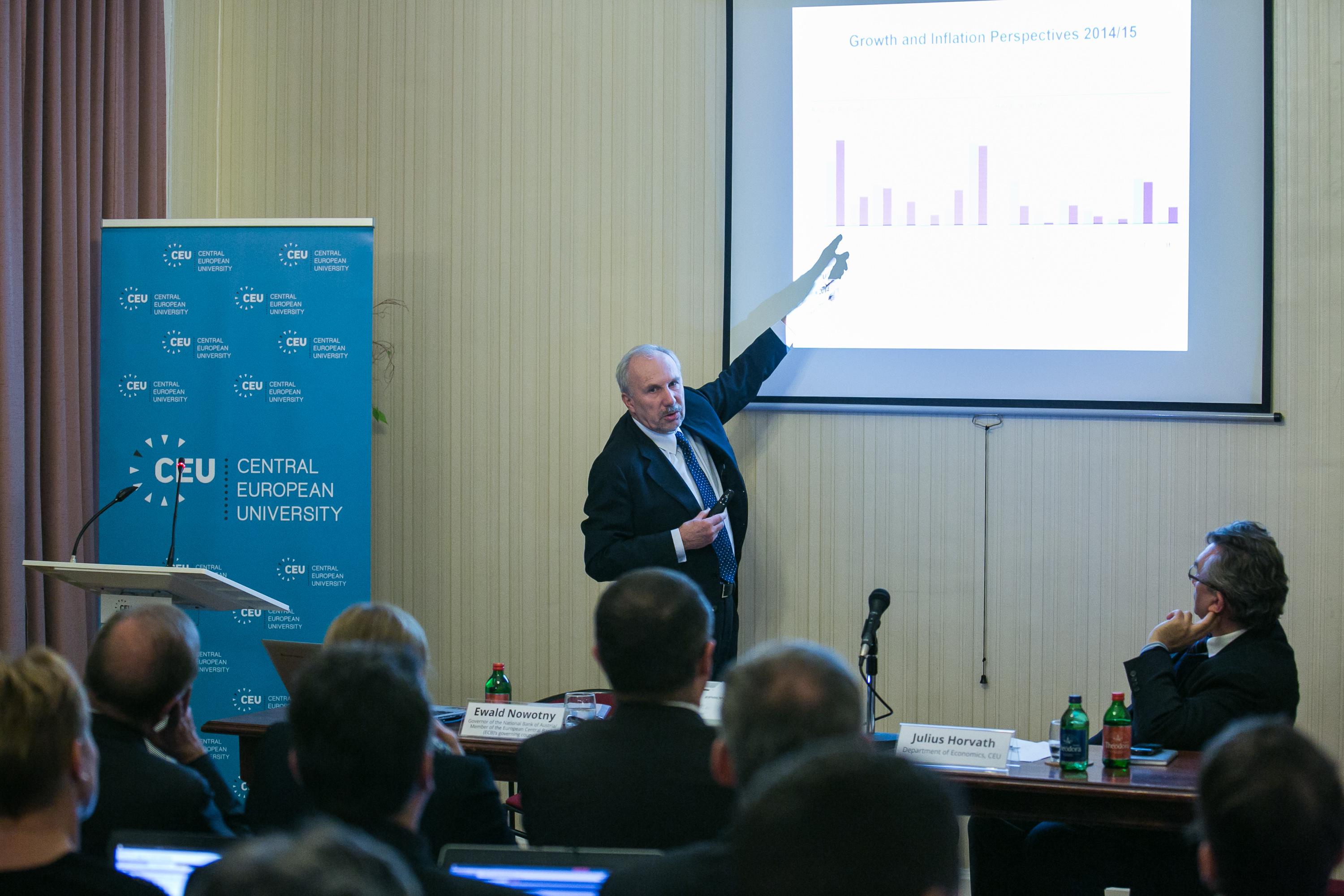 The euro area’s economic growth in 2014 and projected rates for 2015 are far below that of the U.S. and the U.K. , ECB council member and Austrian Central Bank Governor Ewald Nowotny says. Photo: CEU/Attila Nagy

The euro area’s economic growth in 2014 and projected rates for 2015 are far below that of the U.S. and the U.K.  From an inflation perspective, Nowotny predicts very low rates for the euro area this year, approximately 0.8%. This is so-called headline inflation, which includes the deflationary effect of the drastic decline in oil and commodity prices. Core inflation is more stable, but the headline rate needs support in the form of monetary stimulus in order to avoid deflation, Nowotny said.

The plan has precedents in the Fed and the Bank of England’s 2009 asset purchases, which, combined with fiscal policy and banking reform, had the desired effect on prices and the economy. The ECB will act only through bond markets, not capital markets, and was careful to incorporate risk-sharing into the plan and to ensure strong legal basis for its actions, Nowotny said. The ECB plan may not be enough on its own, but it must stick to monetary policy, he said. 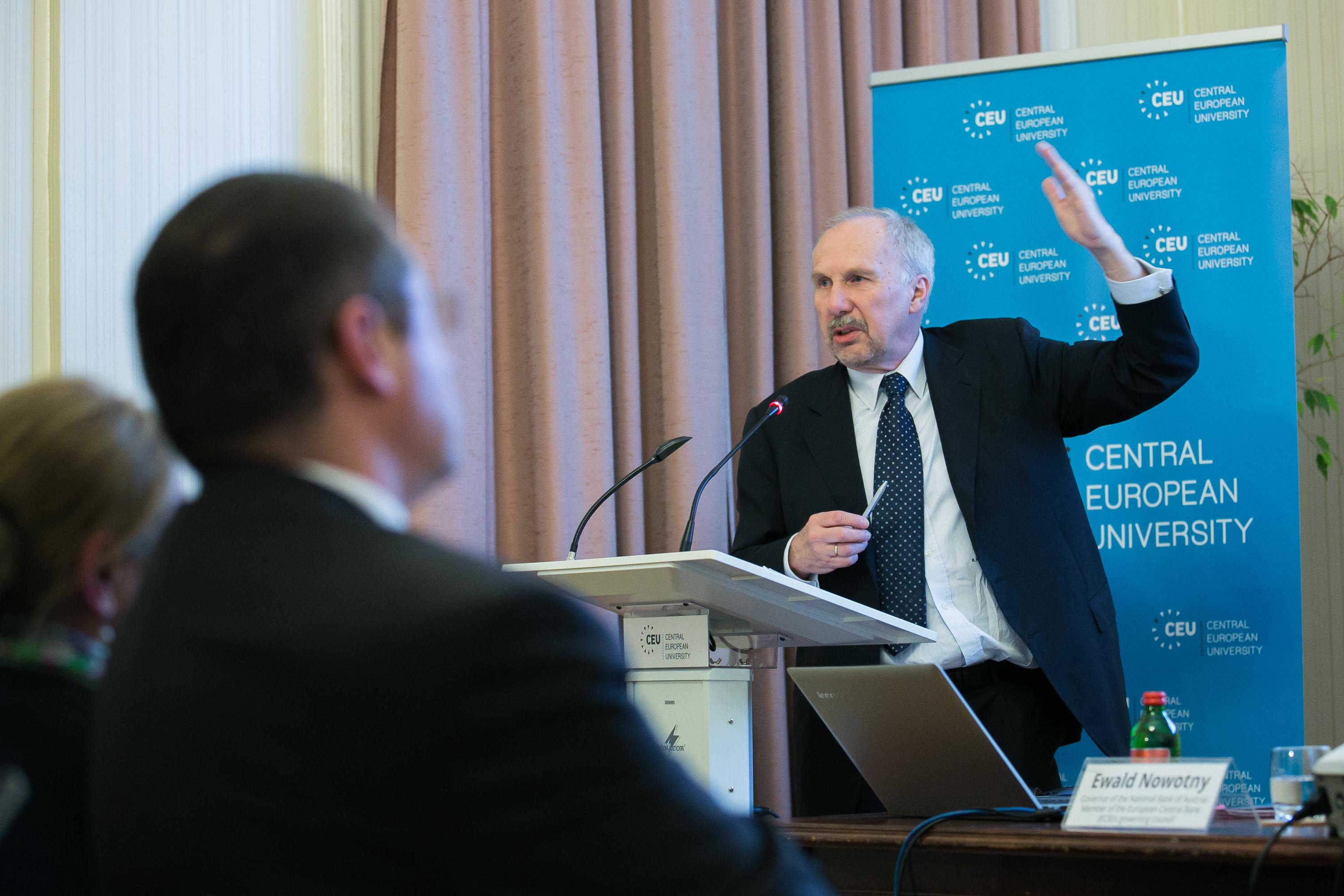 “Expansionary monetary policy may be a necessary but not a sufficient instrument,” he said. “It will make it easier to invest but it will not necessarily make sure there is investment.”

The plan will increase liquidity because those who sell bonds in the program are expected to purchase other, more risky, assets with the proceeds. The influx of cash is also expected to keep the euro weak, supporting an export-led recovery and boosting equity prices.

“Exchange-rate volatility is a side effect of a stability-oriented policy, but it may be a side effect with substantial effect,” Nowotny said. “ For the moment it is beneficial, with an expansionary effect, together with lower oil prices. At end of the day, after this time of turbulence, a certain stability of exchange rates would be beneficial to international trade and therefore to the economy.”

Julius Horvath, head of the Department of Economics at CEU, thanked the central banker for his support of master’s degree students in the department with the Nowotny Scholarships. Nowotny was the recipient in 2014 of the inaugural Lamfalussy Award from the Hungarian National Bank.