Science backs up the fact that humans have adversely affected the climate and that the changes are happening at a rapid and alarming pace. Dr. Andrew Gillespie of the U.S. Environmental Protection Agency (EPA) spoke at CEU on "Climate Change and its impact on Forests in Europe and North America," at a Feb. 2 lecture, co-sponsored by the U.S. Embassy of Budapest.

CEU President and Rector John Shattuck opened the event and introduced U.S. Ambassador to Hungary Colleen Bell, a longtime environmental advocate. Gillespie is the first U.S. scientist to participate in the U.S. Embassy Science Fellow Program in Hungary. The program, which began in 2001, offers U.S Embassies an opportunity to host a working scientist for a one- to three-month stay. The program places U.S. government scientists at posts to provide expertise, advice and assistance with science and technology-related issues.

"The role of science and technology helps us to first understand problems and then to find solutions that guide us towards a sustainable future," Ambassador Bell said. "Effective science is built around collaboration with peers from around the world. I am proud that the United States and Hungary have a long tradition of scientific collaboration. I am committed during my tenure to support that collaboration." 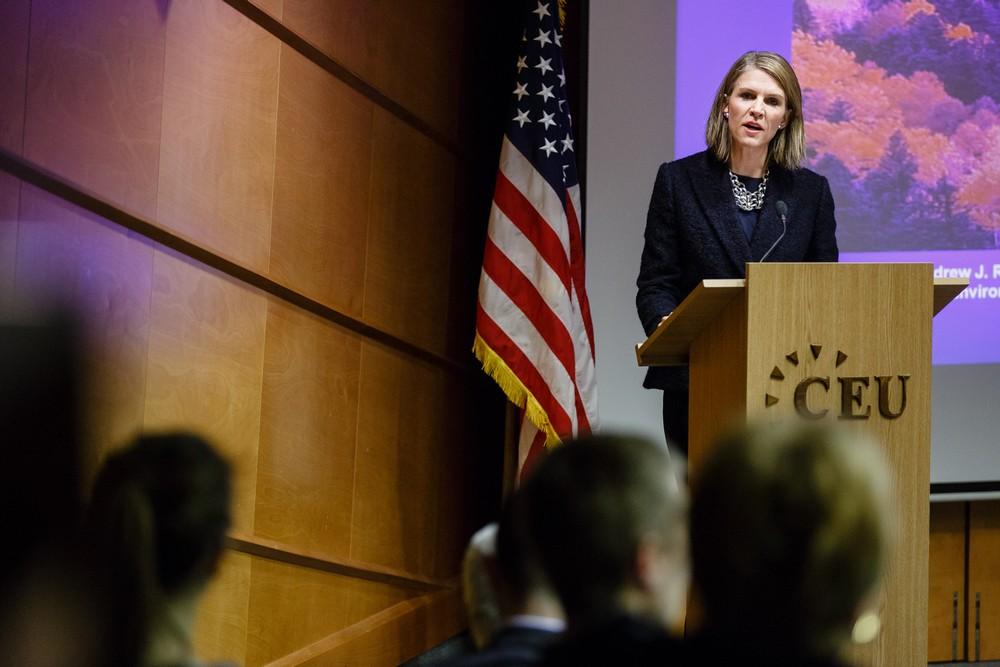 Beginning his lecture with a falsity that has been widely adopted by climate-change deniers, Gillespie reminded the audience that "weather is different from climate." Climate means cumulative atmospheric behavioral trends over at least 30-year periods. There are scientific data – direct measurements – dating back to the mid-1800s of daily temperature and precipitation, for example, from many locations. There is also clear photographic evidence that the glaciers have shrunk significantly. Climate scientists can go back even further in history (by hundreds of thousands of years) by taking ice core samples and analyzing the atmospheric gases trapped in ice bubbles – essentially giving the scientists a picture of what the atmosphere was like then.

Greenhouse gas emissions have risen sharply and steadily in the last 50 years, changing our planet, endangering or even eliminating species, and negatively affecting our vast oceans and seas. Burning of fossil fuels, human and animal respiration, and deforestation are some of the major contributing factors. All of this is leading to a projected increase of two to four degrees in average global temperature by the end of the century; more change at the poles; hotter summers and milder winters; and warmer oceans. "More energy equals more extreme weather," Gillespie explained. 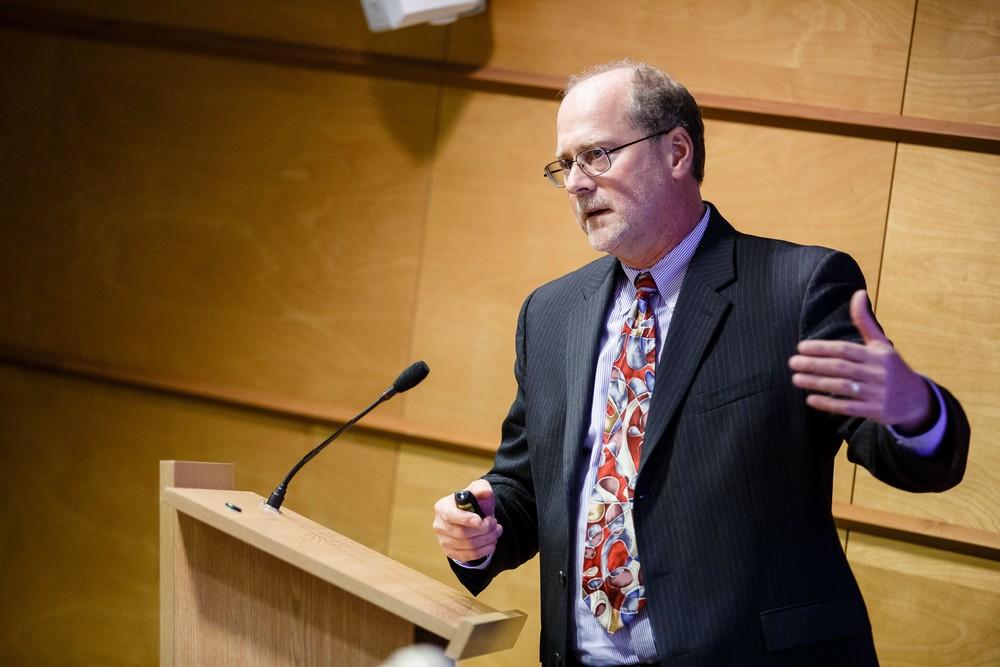 Forests – key in sequestering carbon dioxide and for sustaining vast species of wildlife – become stressed when climate changes and that stress leads to vulnerability. Just as humans are subject to illnesses when their immune systems are compromised, so too are forests. Disease, fires, insect infestations, and loss of biodiversity are consequences of a stressed forest. "Animals can move to better niches; trees don't move so quickly," Gillespie said. Stress on forests can also lead to northward migration of some tree species, increased tree mortality, and increased spread of invasive species.

"We need to change society's expectation and behaviors regarding what people want and need from forests, and what we are willing to give back," Gillespie said.

Gillespie's lecture also served as the kickoff of the CEU/U.S. Embassy Sustainable University Network (SUN) collaboration. In line with CEU's strategic sustainability goals, the U.S. Department of State's Regional Environmental, Science & Technology, and Health (ESTH) Hub for Central and Eastern Europe has partnered with the University to provide a $30,000 grant to support student environmental groups in Hungary. SUN will promote civic responsibility among future decision-makers in Hungary by developing leadership skills, promoting sustainable development training, and reinforcing a shared commitment to environmental stewardship. Throughout the SUN project, several U.S. experts will come to Hungary to share their knowledge on issues of importance concerning environmental stewardship and sustainable development. 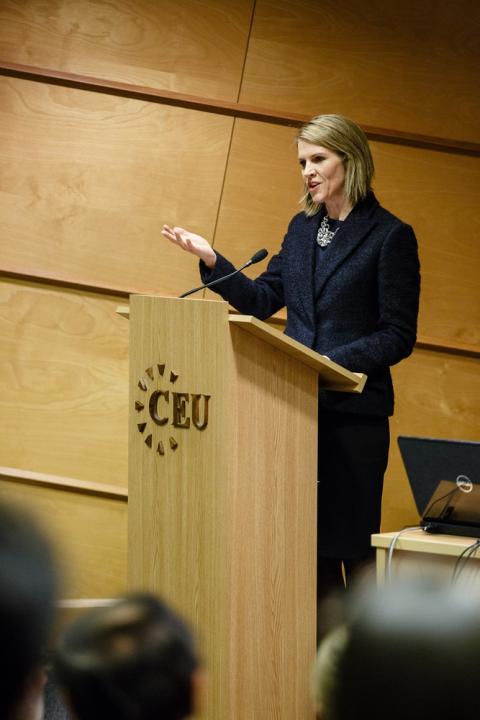 "The Embassy is proud to partner with CEU not just to organize this lecture, but also to support student environmental groups at universities in Hungary as they launch the Sustainable University Network," Ambassador Bell said. "Students in the United States and around the world have led efforts to protect the environment and to honor the natural beauty of their countries. Students in Hungary are playing an active part in that proud tradition, and the Sustainable University Network will enhance their efforts."

Other current SUN partners include Corvinus University of Budapest, ELTE, the Technical University of Budapest, and St. Istvan Egytem in Godollo. CEU Sustainability Officer Logan Strenchock is overseeing the program and is seeking cooperation with other universities and student volunteers. All Hungarian universities are eligible and encouraged to participate in the SUN project. For more information or to register your sustainability group, please check out the Network's Facebook page: https://www.facebook.com/sunetworkhungary and contact Strenchock at StrenchockL@ceu.hu.

Presentation: Climate Change and its impact on Forests in Europe and North America