Fourteen CEU students and faculty had the opportunity to join representatives of five other Hungarian universities and attend an informal meeting with German Chancellor Angela Merkel during her visit to Budapest on Feb. 2. The event was hosted by Andrassy University Budapest.

Merkel’s visit “was a major foreign policy event for Hungary,” according to Peter Balazs, professor in the Department of International Relations and European Studies (IRES) and director of the Center for EU Enlargement Studies (CENS). The Chancellor “set some fundamental norms of EU standards on democracy and human rights” at what Balazs describes as a “very direct and relaxed” meeting with students.

The CEU delegation consisted of two professors and 12 students from across the university, chosen for their good command of German and personal interest in European history and meeting European leaders. Jennifer Salemann, a master's student in the Department of History, whose research interests are the history of the German Democratic Republic, the unification of Germany, and Germany's subsequent role in European international relations, was  “intrigued that Chancellor Merkel specifically wanted to meet with students as part of her visit to Hungary.” Max Steuer, an IRES master's student, grabbed the “unique opportunity to meet  one of the top democratic politicians in the world.”

Chancellor Merkel arrived at Andrassy University Budapest following a state visit with Hungarian Prime Minister Viktor Orban. After receiving an honorary title from the University of Szeged, the Chancellor gave a short speech, focusing mainly on the role of the EU and democratic countries in the promotion and safeguarding of values of freedom, plurality and tolerance. She discussed the history of German-Hungarian relations and the important diplomatic milestones the countries have celebrated. Then the podium was cleared away, and Merkel chatted with students for about 40 minutes. 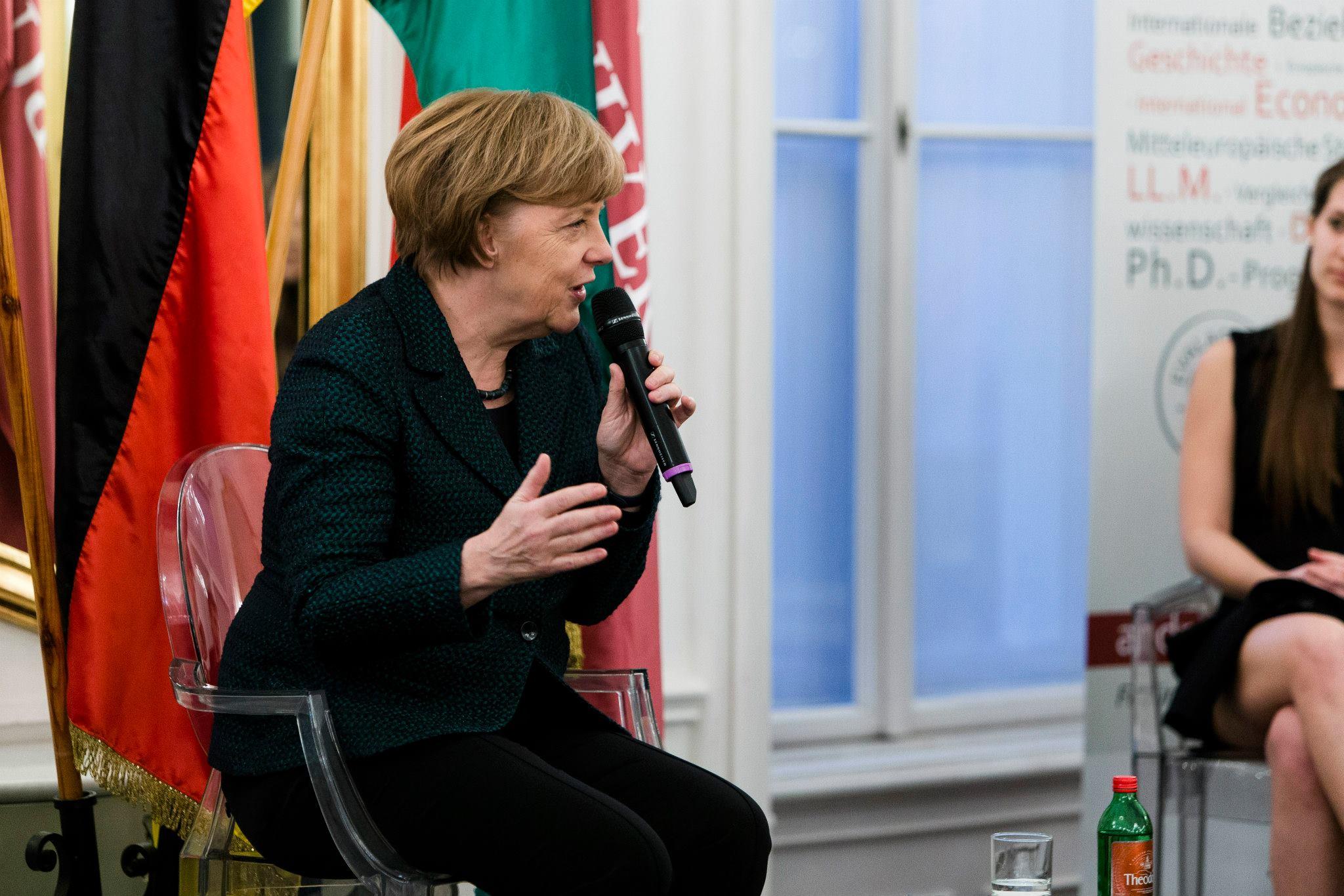 As Friederike von Colln, a student in the School of Public Policy, recalls, the Chancellor was asked questions about the current situation in Hungary, Orban’s stance on people from different cultural backgrounds and his treatment of civil society. She “stressed a greater need for political activism and exchange among young people, tolerance and diversity.”

One of the most active groups at the event, CEU students managed to ask the Chancellor a variety of questions, ranging from the political to the personal. Artem Galushko, a doctoral student in the Department of Legal Studies, asked Merkel about her stand on Ukraine, and what young people could do to make politicians face reality instead of pondering the past. When he offered the example of Vladimir Putin’s comment on the dissolution of the USSR as tragic, Merkel “smiled and said the fall of the Iron Curtain was one of the happiest, most important events in Europe,” Galushko recalls. She also stressed the importance of maintaining communication in conflict resolution.

Salemann asked the Chancellor about the last book she read and how it influenced her. Merkel described how seeing the painting while on an official visit in Florence prompted her to read about Botticelli's “Primavera, “ and the next book she’s planning on reading has also been inspired by an exhibition. Salemann found the Chancellor’s answer “affirming of the role that public institutions play in shaping images of the past in visitor's minds.”

The CEU delegation described Merkel as friendly, approachable and very frank. Christina Hermann, a master's student in the Department of Public Policy, describes her forwardness, honesty and her down-to-earth replies as “both refreshing and fascinating to listen to.” Although not every member of the delegation had an opportunity to directly address the Chancellor, they all agree that meeting Angela Merkel was an exceptional experience. It was good to "see how many issues that are subject to analysis in the classroom are discussed in high-level politics," Colln adds.

The CEU delegation consisted of: