The current government is the most capable Ukraine has ever had, and the readiest to reform, said CEU Adjunct Professor Kalman Mizsei, who heads the European Union Advisory Mission on Civilian Security Sector Reform in Ukraine. His March 23 lecture at CEU was organized as part of the Frontiers of Democracy series by the Department of Public Policy.

“There is no greater task in Europe at present than making Ukraine resistant to external aggression and internal diseases by reforming the state,” said Mizsei, who personally regards assisting Ukraine’s constitutional reform as an “irresistible challenge”.

Widespread corruption is one of the fundamental problems in Ukraine, Mizsei said. “If you work in the police, for example, you probably bought your position. Obtaining something as mundane as a driver’s license also involves bribery. In a vertical system of corruption, all actors that are paid also have to send money upwards. Rent-seeking permeates the system,” Mizsei said.

Efforts at reform has been hesitant so far, but this month, the speaker of the Ukrainian Parliament, Volodymyr Groysman, was appointed to lead constitutional reform. “The good news is that since 1991 this government is by far the most capable to devise deep-going reforms in Ukraine,” said Mizsei.

He named the system of prosecution as one of the fields that still operate as it did in the Soviet era. In Ukraine, state prosecution can initiate an investigation of any person of its own accord, and most of these cases end up in court. Prosecution is a “dark, fearful force in Ukraine”, which has to change, according to Mizsei. 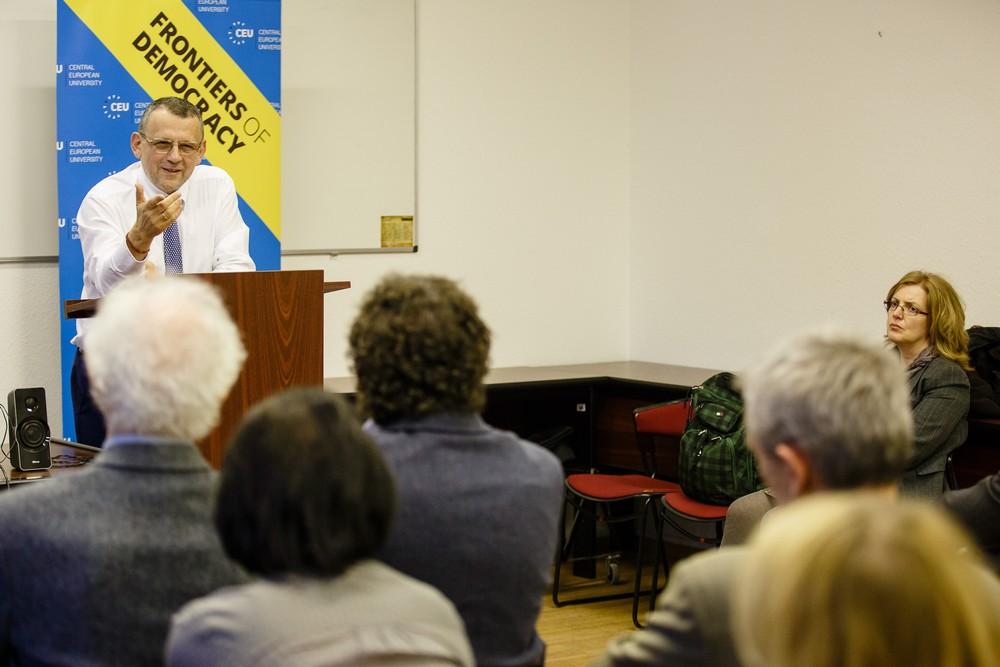 Deregulation is also a crucial element of reform, as the present state of overregulation encourages corruption, impedes foreign investment and alienates citizens. “Ukrainians need a lean, user-friendly state that caters to their needs. The police force, for example, is 3-4 times larger per capita in comparison to a Western European country, but it is ineffective. If their allegiance was stronger, perhaps Russia’s actions would not have been so effective in Ukraine,” said Mizsei. Tax reform is also inevitable, but according to Mizsei, constitutional reform cannot reach its goal without raising the salaries of civil servants, thereby reducing corruption.

“On a positive note, Ukraine has remarkably come together in the recent year,” said Mizsei. Ukrainian national identity as well as tolerance towards Russian-speaking citizens has also strengthened. He added that Russian propaganda proved to be counterproductive, at least in Ukraine.

“Russian news are speaking about a fascist, racist state in Ukraine. The people, however, experience that the current government was elected through clean and completely democratic elections. They don’t take Russian propaganda seriously,” Mizsei said, who also experienced almost no traces of left- or right-wing extremism. “Ukraine remained very calm despite the war,” said Mizsei.