Title/Position: Director of Career Services and Alumni Relations at the School of Public Policy

Number of years at CEU: 2 months

Veal stew with paprika and boiled potatoes.  (I think the stew's called porkolt but it's what I think of when someone says 'goulash'.)

Whose works of art or design have had the greatest impression on you?

It depends on when you catch me, but right now I'd say: David Grossman, Doris Lessing, John le Carre.

What’s your favorite language, whether you speak it or not?

I can do a lot more in English, my native language, than in any other language I know, so if forced to name a favorite, that's what I would say. But that's just because it allows me to say more things, with greater nuance -- so it's really not favoritism, just an efficiency issue. I am also fluent in Italian. I'd love to learn Hebrew, but my linguistic priority for the time being is getting to where I can say something more than 'szia' in Hungarian.

What’s your hidden skill or talent?

A very small number of people who know me very, very well have suggested I might have a future in stand-up comedy.

What’s your favorite quote or idiom?

I tend to say "it depends" an awful lot.

What do you like to do best on Sundays?

Enjoy time with family and friends.

Which is your favorite building, park, museum, or public spot in Budapest?

I haven't been here very long, so there's still lots of exploring to do. That said, I've enjoyed a lovely Sunday morning at Rudas Bath and have especially enjoyed nighttime walks over the Chain Bridge.

Reading late into the night and then sleeping in the next morning. As the mother of two young children, however, I don't get to do this very often.

What is your favorite or most visited website or blog?

Here in Budapest, I have discovered Hungarian Spectrum, and I try to read it regularly.

I would love to spend a year or so with my husband and kids traveling overland across Europe and Central Asia, west to east. 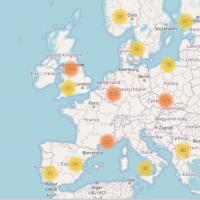