Over the past quarter century, CEU has become a globally recognized academic institution and an invaluable asset in Budapest. As the University's needs changed and its population grew, the need for new space became evident. As part of CEU's Earth Day celebrations, award-winning architects Sheila O'Donnell and John Tuomey presented to the campus community on April 22 to share their inspirations for the design and, importantly, the "green" elements key to BREEAM sustainability procedures that will set a precedent in Central and Eastern Europe.

"The primary rationale for this is academic. CEU started in one building – the Monument Building at Nador 9 – with fewer than 100 students. We have outgrown our initial premises. We are here to stay, so we thought it would be good to have a proper campus that is fit for the function of a university and our goals and ambitions," said Provost and Pro-Rector Liviu Matei. 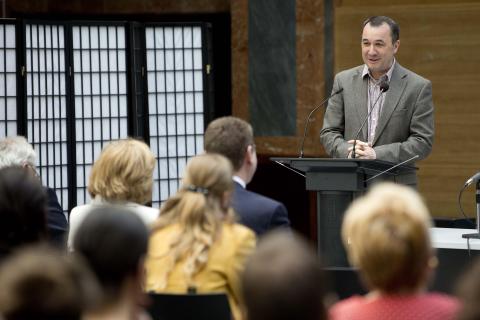 "Along the way we discovered that the existing buildings had a lot of environmental and efficiency issues. With the redevelopment, we are looking at saving close to €1 million per year thanks to energy efficiency and not having to rent extra spaces anymore. We have a core of students, faculty, and staff who are dedicated to these causes and we decided we wanted to achieve very high environmental standards."

CEU's Pal Baross, who oversees the redevelopment project with his colleague Zofia Pazitna, is the president of the Hungarian Green Building Council. He noted that throughout his education in the 1960s, architectural and design principles went from fighting against nature to working with it.

"I am very proud to say a few words about the CEU redevelopment project, because I think this time we got it right," Baross said. "I work for a community whose principal commitment is for sustainability. I work with a design team whose commitment to nature is fundamental. In fact, I think there is no longer a difference between the natural and the building environment; in their work it is just one continuity." 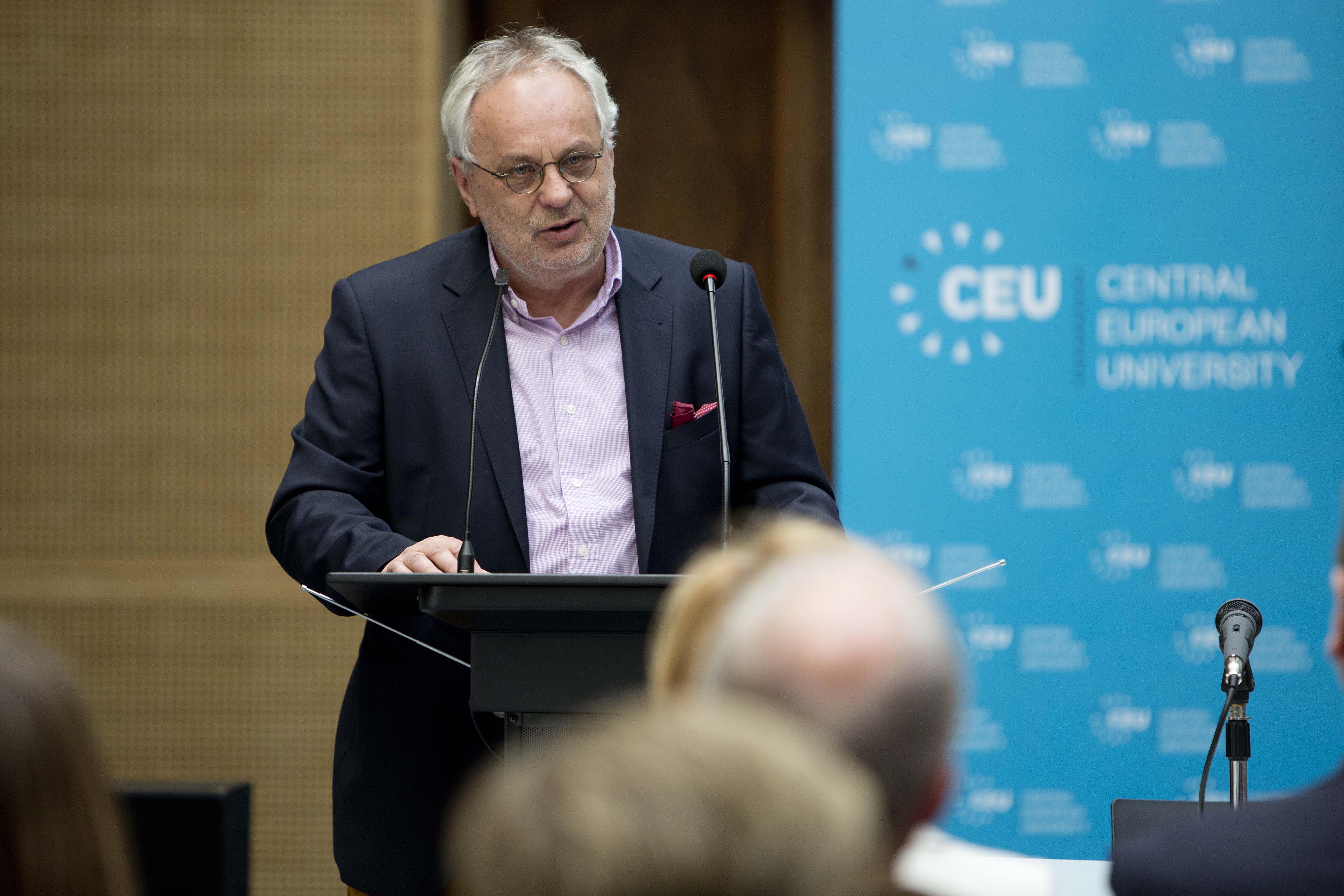 O'Donnell and Tuomey's approach incorporates eco-friendly elements, a key factor in blending new construction into the existing environment. O'Donnell noted that the orientation of buildings and how the sun hits them is considered, as well as the reuse of existing structures when possible. As Tuomey explained, their aim in creating new spaces is to "reduce demand on energy consumption through design and bring in the use of energy resources as economically as possible."

Vice-President of the Hungarian Green Building Council Zsombor Barta spoke about BREEAM categories and standards, explaining that, among all of the sustainability assessment methods, BREEAM is the only one that is project-specific and appropriate for CEU's "unique and complex project involving historical buildings."

Walking the audience through a number of their previous designs on campuses and in urban environments – matching the profile of CEU's needs – O'Donnell detailed "green" elements of the design. In an effort to always use "materials appropriate to the context," they often select perforated brick as a means to screen the sun. Facing due west, the facade of the new Nador 15 building will feature this element.

"We're always looking for creative ways to handle heating and have fresh air," she said. The new CEU campus will have a system that will automatically open and close windows based on the outside temperature, but will also allow them to be opened manually. 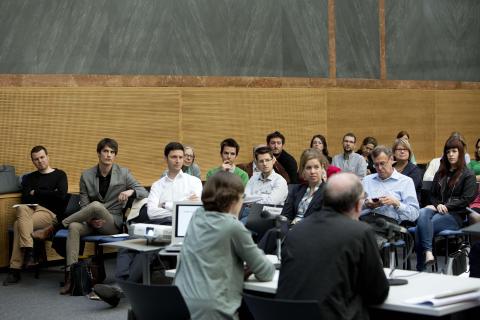 The design of the new campus was inspired by the city of Budapest and its elegant courtyards. "We want our new building to feel like it's made for Budapest and that it's part of the inherited cultural landscape of this city," Tuomey emphasized. The architects believe that respect for legacy is a very important part of design, which is imperative as CEU dwells in downtown Budapest, a UNESCO World Heritage Site.

"Sustainability starts with the city," Tuomey added. "Nador utca – the street where CEU is – has a monumental presence in Budapest. There's a visual, textual, material relationship in the design." They took into account CEU's relationship to the nearby Danube River and existing monuments and wanted to "better integrate the University in the urban/public realm."

This kinship with the neighborhood also applies to the interior of the campus.

"A connected campus is the first principle of our work – connected to the city and connected within itself," Tuomey said. "As it was, the walls between the buildings were too strong. In the design, there is a focus toward the courtyards – ways of making interconnections between the buildings, not only on the ground floor, but on the upper levels. This is the tradition of Budapest: a city of courtyards and passages." The pitched roofs with windows to the sky in these courtyards give a feeling of openness and they will allow "breathing space for social, intellectual interaction." He also noted that the planned rooftop garden, which will have spectacular views of both St. Stephen's Basilica and the Hungarian Parliament, will provide a campus atmosphere in addition to valuable green space. There will be levels of depth in the roof garden, he noted, so that proper trees can grow and take root there. 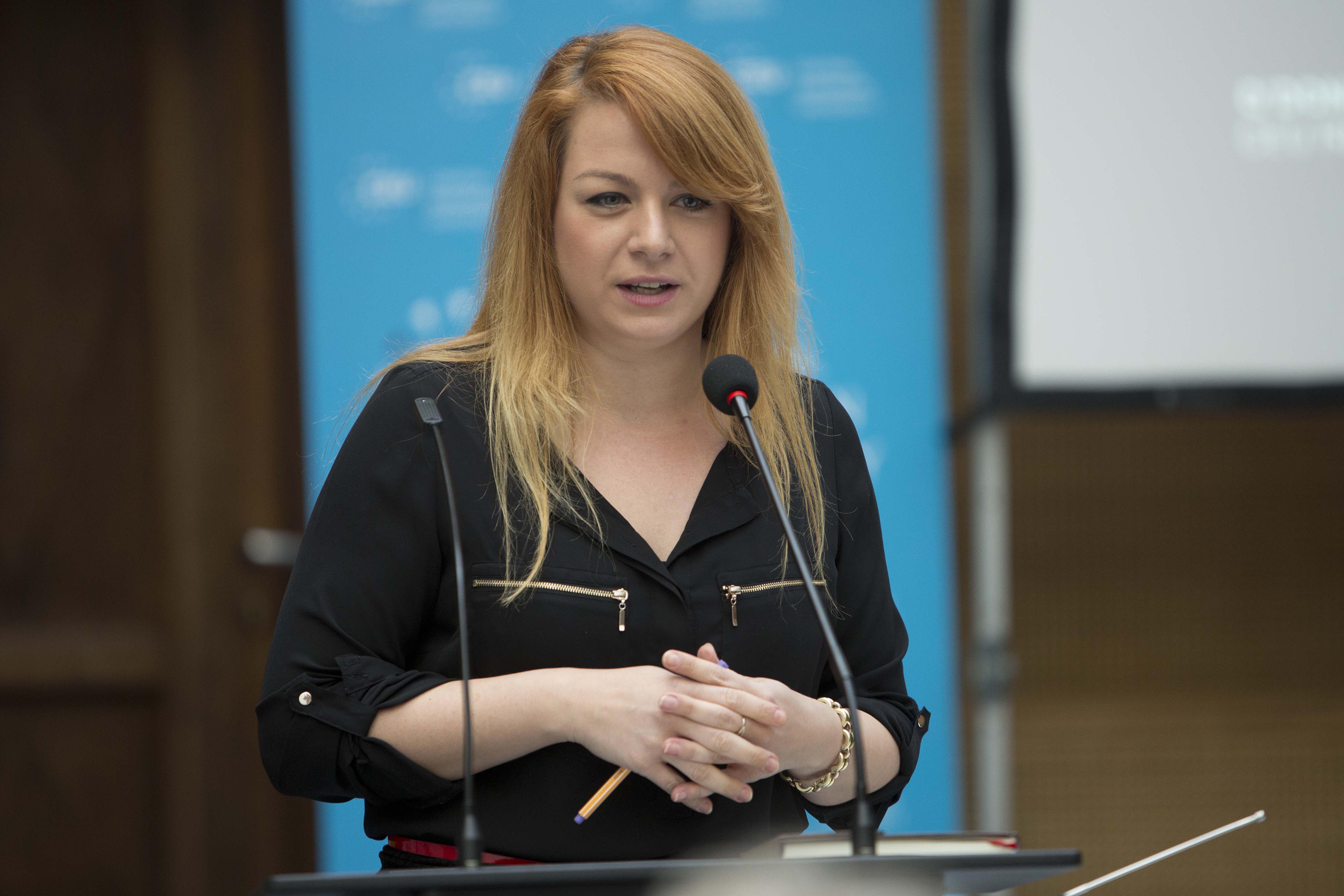 The Campus Redevelopment project is the result of detailed consultations and analysis with those who use the space, experts in environmental building, and local heritage authorities. Tuomey emphasized that it was of utmost importance to them to take into account the way people work and study in the space. A key figure in providing feedback on CEU's environmental efforts is CEU Sustainability Officer Logan Strenchock.

"The significant change in the physical structure of our campus should be accompanied by a transformation of psyche, and a renewed commitment to preparing community members for becoming leaders in finding solutions for pressing issues such as mitigating climate change, building more resilient communities, developing more effective environmental policy, and negotiating partnerships which promote smarter energy and cleaner production systems, to name a few," said Strenchock. "Education for sustainable development pledges must be incorporated within all CEU departments and offices, and be supplemented with an increased focus on establishing a culture of volunteerism and civic participation in the name of environmental education." 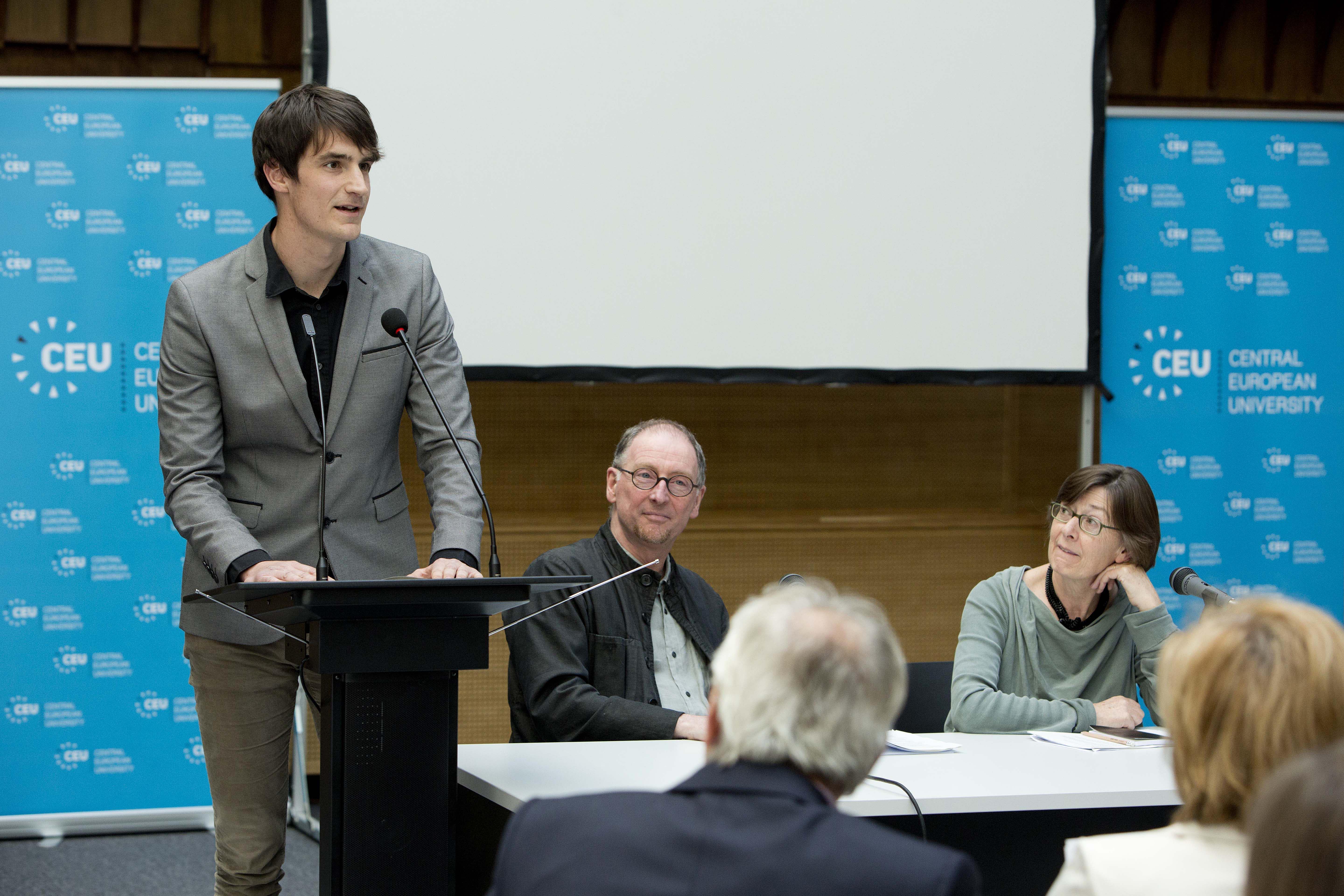 For more information on CEU's Campus Redevelopment project including renderings, visit: http://www.ceu.edu/redevelopment. O'Donnell and Tuomey were recently named the 2015 recipients of the Royal Gold Medal, the world’s most prestigious architecture award.