Former Hungarian Minister of Foreign Affairs Janos Martonyi and CEU President and Rector John Shattuck were guest speakers at the inaugural Euro-Atlantic Cafe series hosted by the Centre for Euro-Atlantic Integration and Democracy (CEID). The pair informally discussed Hungarian-U.S. relations as part of the new initiative on Thursday, April 30 at the Budapest Music Center. They talked about trade between the nations, the conflict in Ukraine and subsequent sanctions levied against Russia, as well as the Obama presidency.

Both Martonyi and Shattuck pointed to the long history of cooperation and friendship between Hungary with Shattuck emphasizing that some Americans do not understand that the Hungarians' struggle for freedom began under the Habsburg Empire, long before communism. Parallels in both nations assure Martonyi that there is an "inseparable link between national identity and freedom that will keep us together." 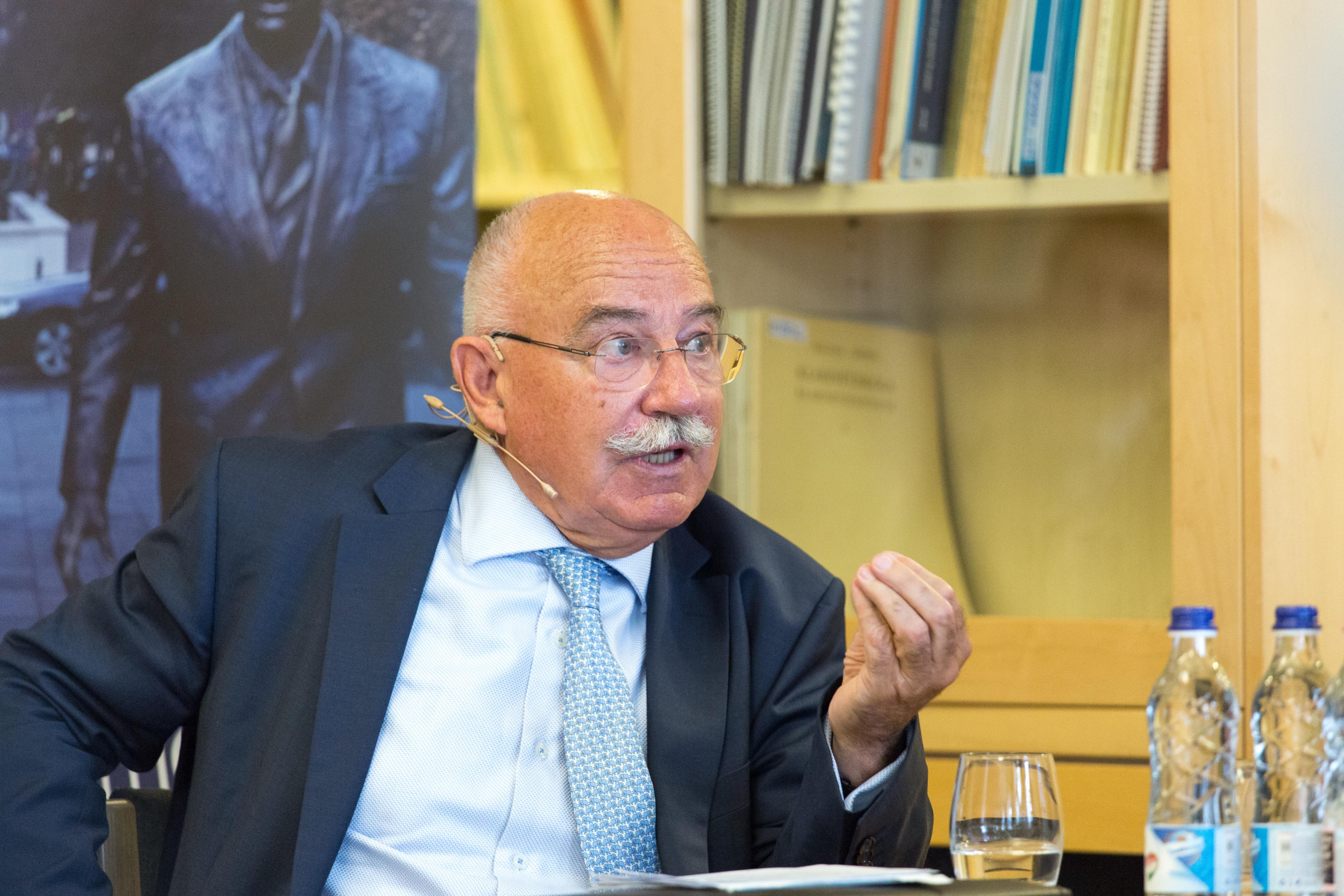 Shattuck, who is a former U.S. assistant secretary of state for democracy, human rights and labor, continued by underscoring the shared interests in trade and energy, as well as NATO membership. Martonyi sees room for improvement in the trade balance between the nations, especially when it comes to the U.S. granting more export licenses to Hungary. He wants to see U.S. gas and oil make their way to the EU but remarked that there is "gridlock in the the industry."

With Hungary sharing a border with Ukraine and an official state visit by Putin in February, the ongoing Ukrainian conflict is ever-present in the minds of many Hungarians. Both Martonyi and Shattuck agree that Russia's aggression is a clear violation of international law but do not believe that arming the Ukrainian military is the solution. A compromise is best, they agreed, but Martonyi stressed that this will take time and patience.

"One of them invaded the other one and the one who invaded is a nuclear super power," Martonyi said. "I have a feeling that we don't yet know how to handle it. The stakes are very high. If basic things are violated, it must be taken control of. You cannot accept violation of international law, otherwise we'll have even worse problems."

Shattuck built on this saying that, for now, the projection of two forms of power are crucial: sanctions and a united NATO – or "diplomacy backed by the possession of force." He imagines there will be a series of very intense negotiations that will, ideally, involve the status of Crimea as well as Eastern Ukraine, withdrawal of Russian forces, increased autonomy for Ukraine, and a greater degree of integration between Russia and Europe and Russia and the U.S. "Russia seems to think now that it's relatively self-sufficient, but that's not realistic," Shattuck said.

In Martonyi's view, Ukraine is still sending mixed signals about its situation and what the people there are striving for. Other factors also add to the uncertainty. "How the Minsk Agreement will be implemented is a huge question. All participants must be more interested in cooperation than conflict for it to work." 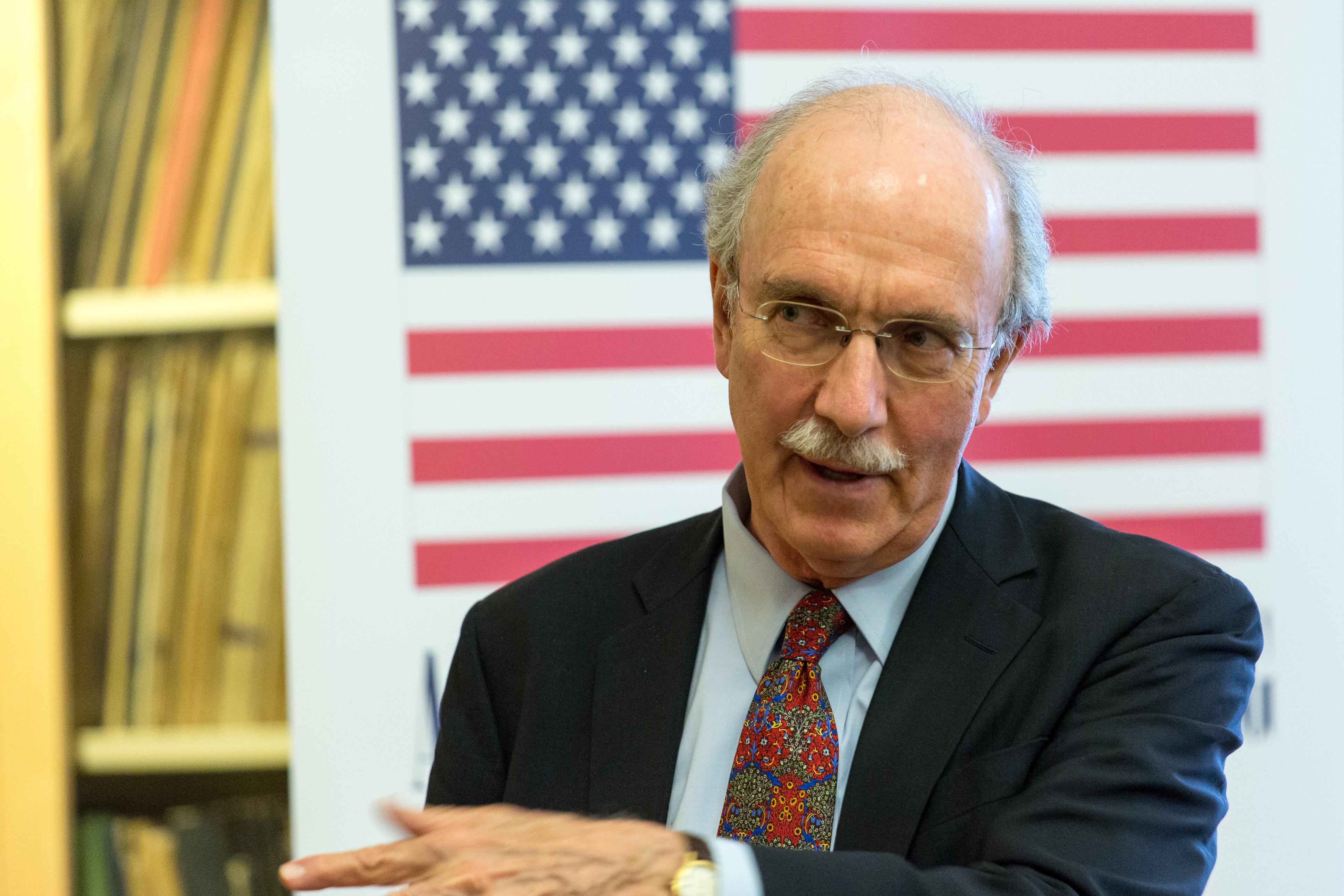 Regarding Obama's presidency, both Shattuck and Martonyi praised his effort to change they way the U.S. uses its power – a style Martonyi described as exercising power "not over but with." Both agreed that the 44th U.S. president inherited intimidating, complex problems including the wars in Iraq and Afghanistan. "I think Obama's approach toward the world is realistic. He's trying to lead the country into a world that is no longer hegemonic, but multipolar," Shattuck said. He thinks Obama's legacy is a big one and pointed to the President's success in essentially ending the wars in Iraq & Afghanistan and withdrawing most troops; in drawing both Iran and Cuba out of isolation and his efforts to negotiate nuclear agreements with the former; and, on the domestic front, overhauling the U.S. healthcare system.

While Shattuck doesn't feel that Europe will factor into the upcoming U.S. presidential election, he believes it should. The future of U.S. foreign policy depends on who is elected, he noted. Some candidates are keen to ramp up a new Cold War, he said, while others are more restrained. Hillary Clinton, the only Democrat to have officially announced her candidacy, "seems aligned with Obama regarding the U.S. as part of a multipolar world."

CEID is an independent, non-profit non-governmental and non-partisan think tank, based in Budapest. It was founded in 2001 with the objective of promoting Euro-Atlantic dialogue. The Euro-Atlantic Cafe is supported by the Embassy of the United States to Hungary. For more information on the Euro-Atlantic Cafe, visit: http://www.ceid.hu/euro-atlantic-cafe-the-starting-point/. The moderator was Hungarian journalist Edit Inotai.

Working for the Renewal and Strengthening of Democratic Societies: The CEU Democracy Institute
June 14, 2021