CEU’s School of Public Policy (SPP) and the Center for European Union Research (CEUR), the French Institute of Budapest, and the Embassy of France in Budapest co-organized a series of panel discussions at CEU on May 19 to reflect on freedom, religion, and security in the aftermath of the Charlie Hebdo attack on January 7, 2015. The event was part of CEU’s Frontiers of Democracy series.

In his welcoming remarks CEU President and Rector John Shattuck described the event as “an exploration of the times we are living in.” He noted that one of the intentions of the terrorists was to undermine the values of tolerance and freedom of speech. Shattuck said the attacks had exposed the “fragility” of some of our freedoms. His Excellency French Ambassador Roland Galharague urged his audience to keep in mind “one simple thought” – that keeping freedom alive was just as important as more conventional security measures in our efforts to defend against terrorism. Associate Professor Marie-Pierre Granger, of the Departments of Public Policy, International Relations, Legal Studies, and Center for European Union Research, recalled that alongside the strong mobilization of support for Charlie Hebdo, there were also some who were reticent to stand behind the journal because they felt the cartoonists had “gone too far,” and contributed to further marginalizing already oppressed French Muslim communities. This tension, she explained, would be explored in the first panel.

The three panel discussions focused on: freedom of expression - what to say or not to say; media freedoms – between the state, money, and security; and the role of religion(s) – what place for Islam in Europe. Panelists provided diverse disciplinary and geographic perspectives on the issues. 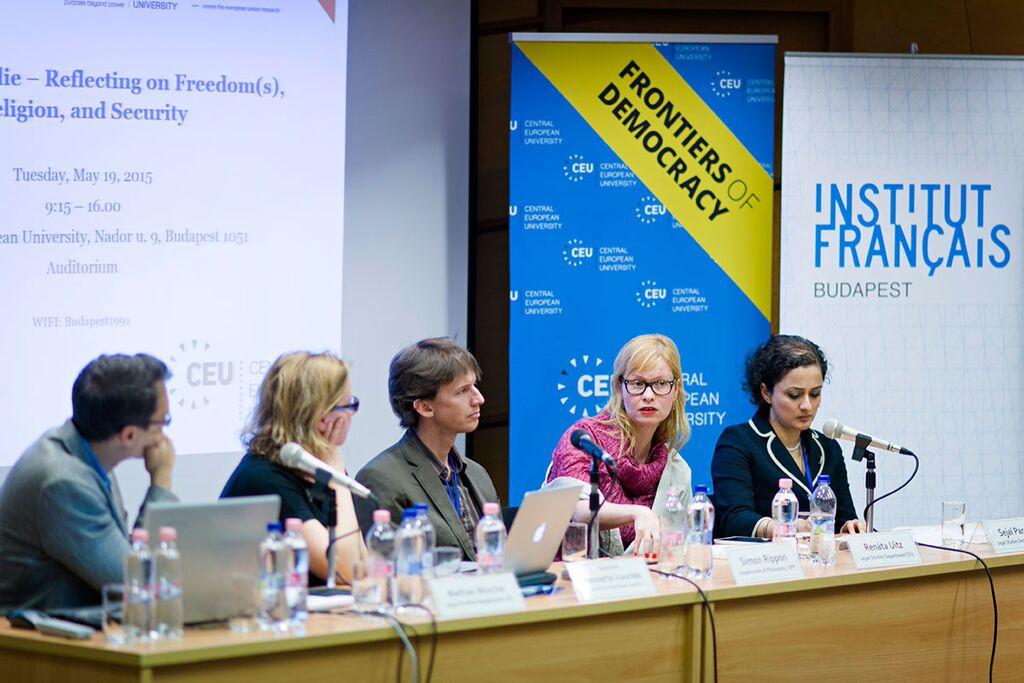 CEU Legal Studies Associate Professor Mathias Moschel moderated the first panel which featured Professor Stephanie Hennette-Vauchez of the University of Paris-Ouest,  CEU Assistant Professors Sejal Parmar, of the Department of Legal Studies,  and Simon Rippon , of SPP and the Department of Philosophy, and Professor Renata Uitz, head of the Department of Legal Studies. Panelists explored the scope of freedom of expression from a comparative perspective, focusing in particular on the tensions between freedom of expression and religious freedoms on the one hand, and public order and security on the other. While legal scholars offered critical analyses of how international, European, and national laws protect and limit speech, Rippon, as well as members of the audience, asked whether all forms of expression and content should enjoy special protection, even when they are hurtful. 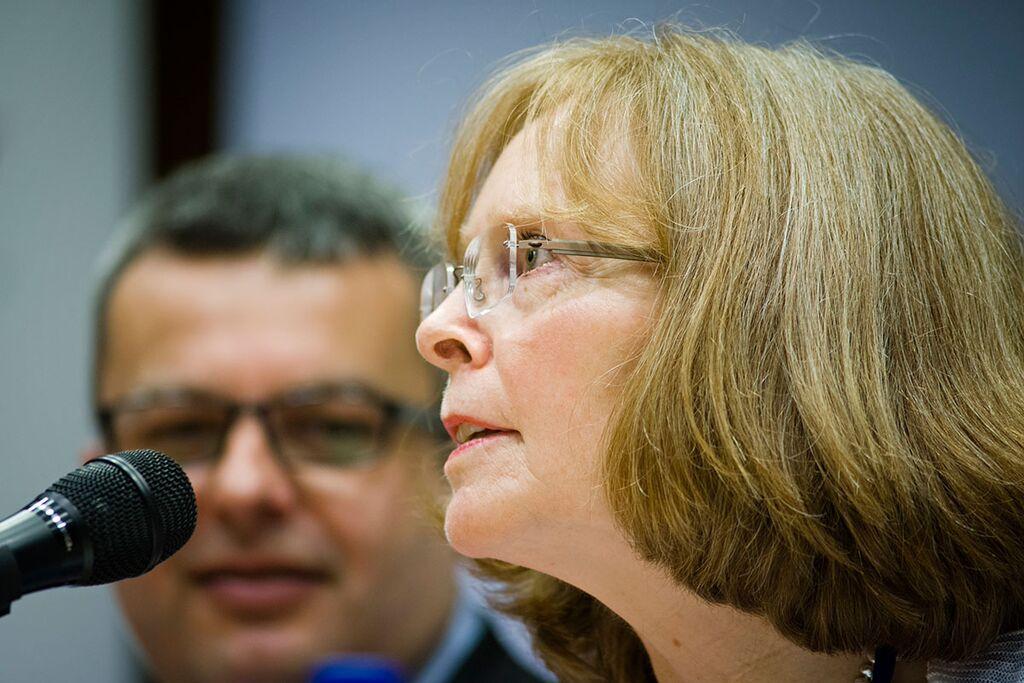 Ellen Hume, Annenberg Fellow in Civic Media at the Center for Media, Data and Society (CMDS) at SPP, moderated the second panel focused on media freedoms and the protection of journalists that included Peter Noorlander, chief executive officer, Media Legal Defence Initiative; Kate Coyer, director of the Civil Society and Technology Project at CMDS; and Tamas Bodoky, editor-in-chief of atlastszo.hu. They revealed the many threats facing traditional as well as citizen-journalists, in particular physical violence, governmental pressure, and economic dependency, and how journalists curtail their freedom of expression through various forms of self-censorship. Panelists also explored what we could and should do to ensure that freedoms were not lost in the interests of public security, and stressed the responsibility of members of the media themselves to alert the public to this issue. 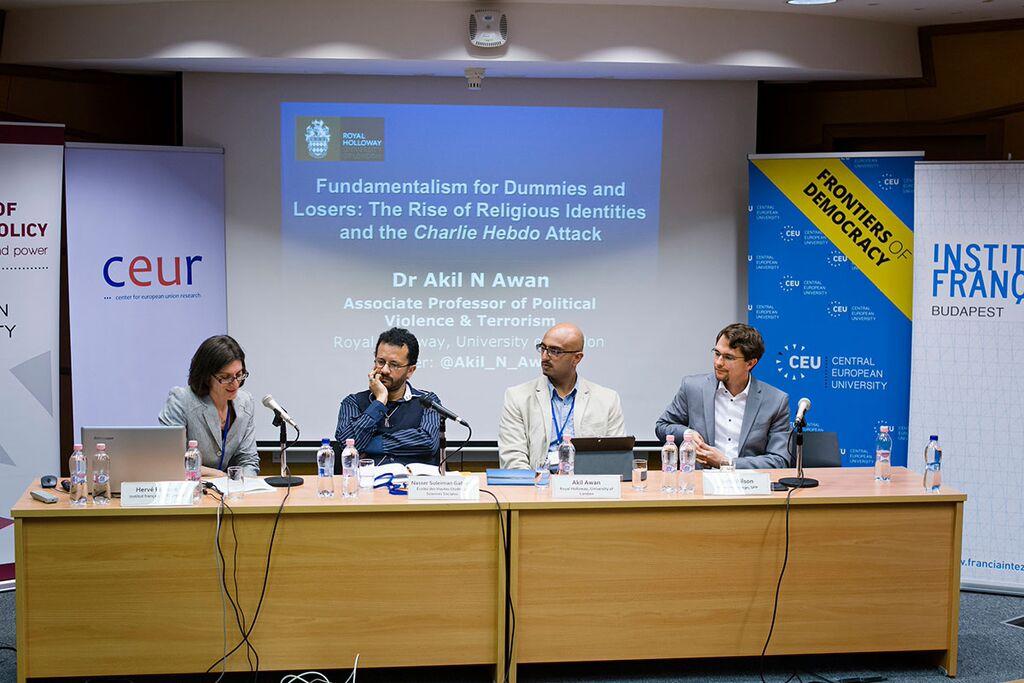 Panelists challeng the view that the Paris attacks in January 2015 were religiously motivated. Photo: CEU/Daniel Vegel

In the concluding panel on the role and place of religion, SPP Visiting Research Fellow Brett Wilson posed questions to Associate Professor Akil Awan, of the University of London, and Nasser Suleiman Gabryel, of the Ecoles des Hautes Etudes et Sciences Sociales. Panelists challenged the view that the Paris attacks were religiously motivated, and stressed instead the role of identity construction and the importance, in secular societies, that religious matters not be ignored but instead discussed openly and in a public space.

In her concluding remarks, Granger said that “more events of this type are needed.” Herve Ferrage, director of the Institut francais de Budapest, agreed noting that the day-long discussion had focused on questions that are “at the very center of our democratic values.”