More than 600 CEU students from nearly 80 countries received their master's or doctoral degrees at this year's graduation ceremony on June 21, the University's twenty-fourth commencement. These graduates join a body of 12,000 CEU alumni who are distinguishing themselves as the next generation of leaders and scholars in the region and beyond. In addition to the degree conferring, the CEU Open Society Prize, awarded for substantial contributions to the creation of an open society, was presented to the International Renaissance Foundation (IRF) for their work in Ukraine. CEU’s Provost and Pro-Rector Liviu Matei presided over the ceremony. 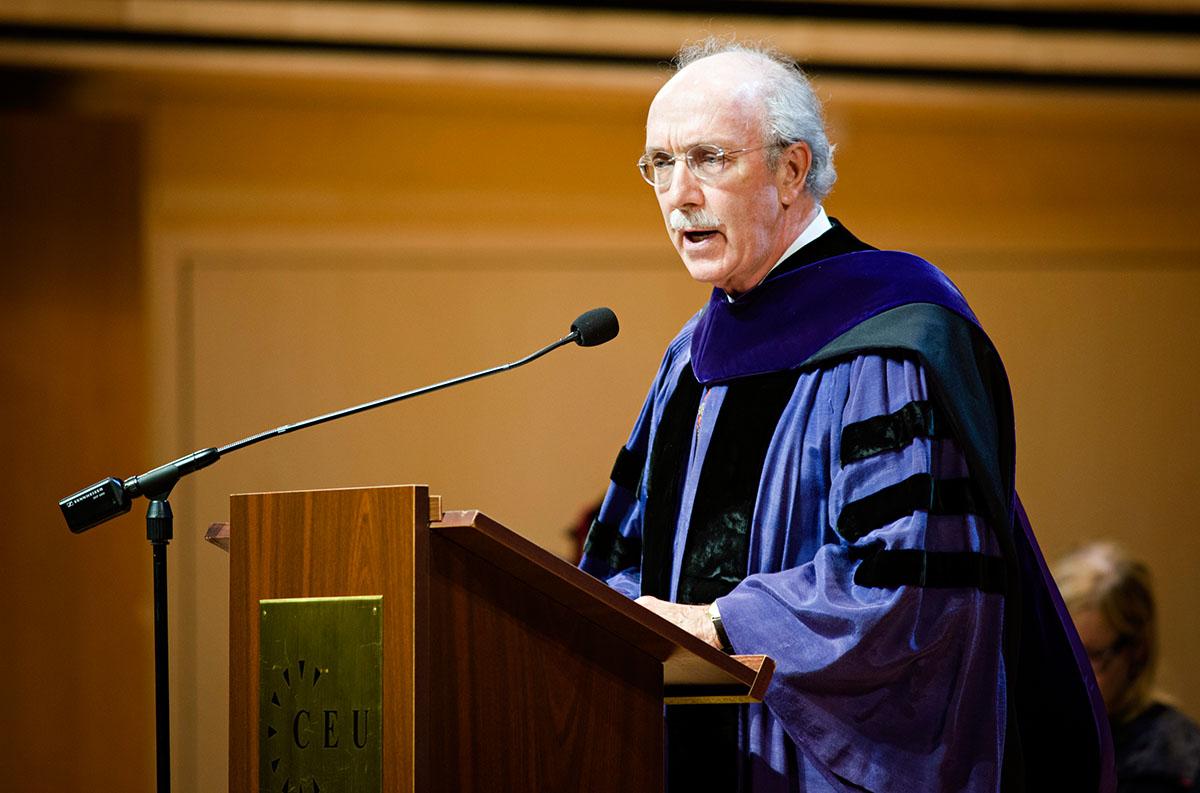 "As CEU graduates you will pursue [CEU's] mission in many different ways: by reforming economies, leading governments, promoting human rights, helping refugees, teaching students, running think tanks, creating start-ups, managing businesses, fighting corruption and working to build a better world," said CEU President and Rector John Shattuck in his opening remarks at the Budapest Palace of Arts. "I know you're asking yourselves 'How you can do this?' The answer is to think critically, the way you have learned to do at CEU."

Chairman of the CEU Board of Trustees Leon Botstein reminded students that their CEU degree holds very special responsibilities.

"You chose to come to a university that asks you to be interested in more than yourself, in something more than your personal career – to be concerned about freedom, justice, equality, and peace. I am very proud that you chose this; you did not choose to go to an ordinary university." 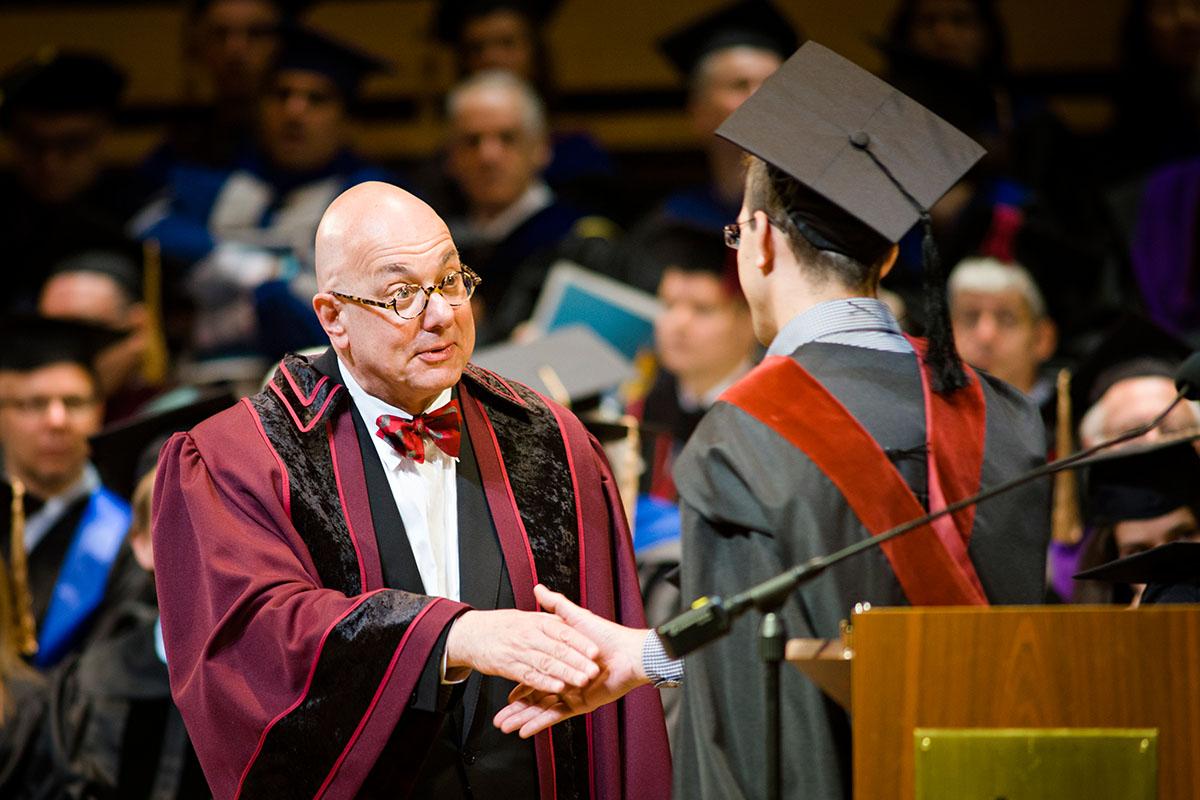 Chairman of the CEU Board of Trustees Leon Botstein shakes a graduate's hand at the 2015 graduation ceremony. Image credit: CEU/Daniel Vegel

Before the conferring of degrees, both the alumni speaker and student speaker addressed the graduates on behalf of their respective cohorts. Alumni speaker Magdalena Majkowska-Tomkin called her CEU experience one of the most significant of her life and said it gave her grounding in values that she believes are more important today than ever.

"It's not always going to be easy for you. You have to go out there and carve a space for yourself," she told graduates. "As long as you know your foundation and your direction, you will succeed. I wish for you that the sense of achievement, commitment and belonging to a distinguished academic community will guide you in your life." 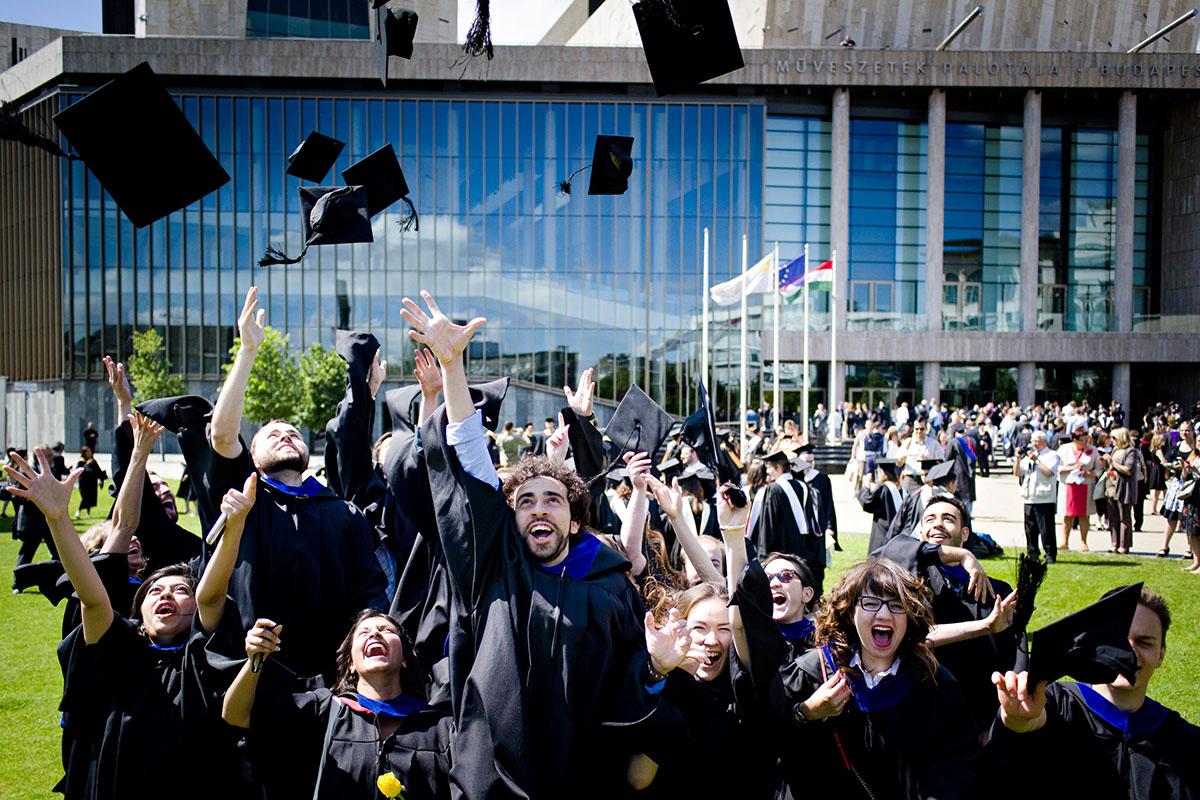 As the result of discrimination against him, student speaker Elvis Shakjiri said he dedicated himself to justice. He graduated from CEU's Roma Access Programs before pursuing his master's degree in the Department of Legal Studies. 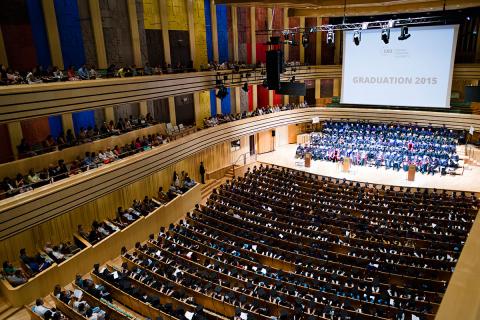 After the conferring of degrees, CEU Founder and Honorary Chairman George Soros presented the Open Society Prize to representatives of IRF for the work they have done to build a "new Ukraine." Soros noted that, although IRF did not directly participate in the Maidan protests, it supported those who did by protecting their civil rights and providing legal and medical aid to them and to families who lost loved ones in the revolution.

"Spontaneous revolts occur quite frequently: the Arab Spring touched off a wave of revolts that have spread worldwide. It is less often that revolts endure; usually their energy is exhausted after a while. That is what happened with the Orange Revolution," Soros said. "It is quite exceptional when a protest movement is transformed into constructive, nation-building activities. That is the case in Ukraine now and the Foundation has played a central role in it."

Both IRF Executive Director Yevhen Bystrysky and Chairman of the Board Oleksandr Sushko accepted the award on behalf of the Foundation. 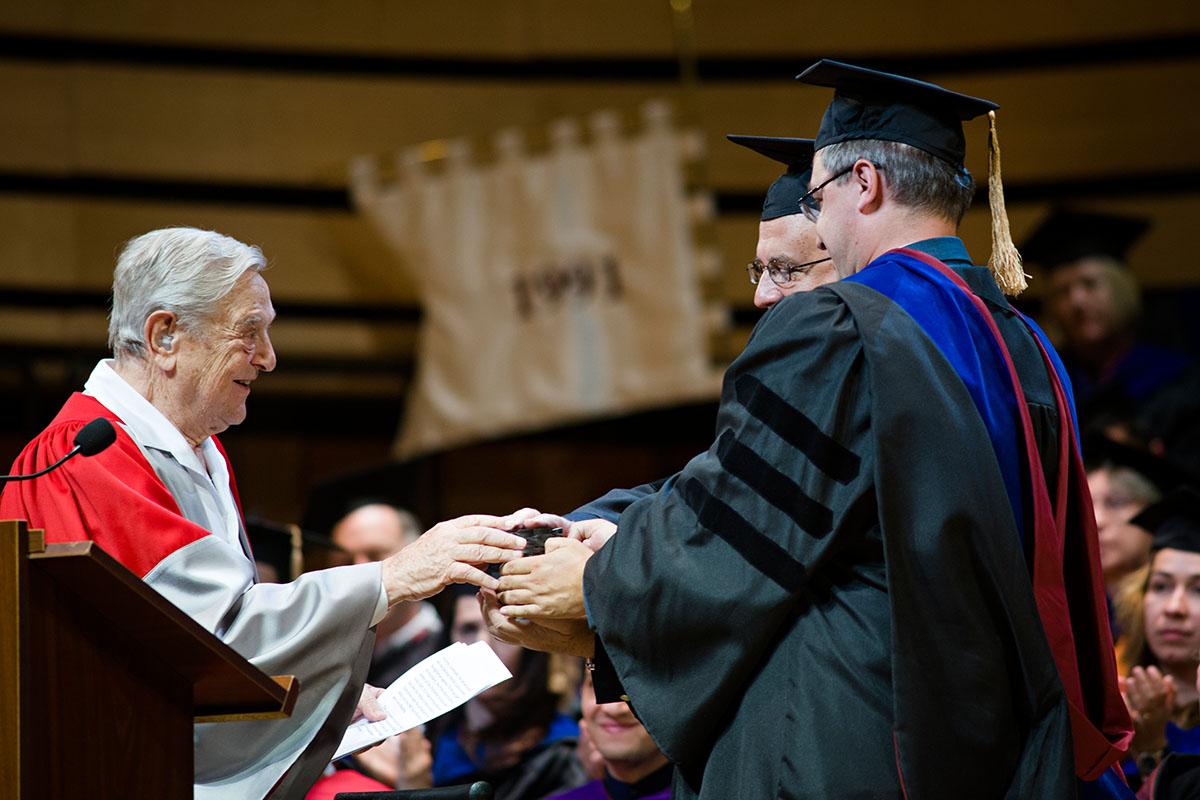 "It is a great honor for us to get this award which has its own story, its own logic and value. This is an award not for us, as people representing the Foundation, this is an award for the entire civil society of Ukraine, Bystrysky said. "Here the major element of distinction is that this is not just a set of values which we share, a set of ideas which we declare, this is also a set of practices which we try to use on a daily basis in normal life. It's a major challenge for us – not just to defend it against a certain other side but to practice them as a normal guideline for life. You probably know our country is under the challenge of external aggression but also under the internal pressure of an old culture which has stolen part of our past. We will not accept them stealing our future!"

Echoing his colleague, Sushko noted that the Prize is meant for the new generation of reformists establishing and promoting open society values in Ukrainian politics.

"We sincerely understand it is not the final point of the story. Unfortunately the war in the East of Ukraine is not over. It is a fight not for the piece of territory, but for the dignity of people and for the right of the nation to determine its own destiny," he said. "It is also the fight against domestic inertia of the old, bureaucratic and corrupt system which has been preventing Ukraine from success for many years."

To close the commencement ceremony, Shattuck offered these words to graduates, "Go forth and save the world!"