Founding School of Public Policy (SPP) Dean Wolfgang Reinicke opened the School’s Annual Conference by highlighting the key questions that the speakers and panelists would be addressing over the next two days: is democracy discredited and increasingly neglected around the world? If so, how and why – and what can be done about it?

The conference, which was organized around the theme “Democracy Shunned,” featured presentations from four distinguished scholars: Barnard College Professor of Political Science Sheri Berman; Cornell University Aaron Binenkorb Professor of International Studies and Government Valerie Bunce; Columbia University Robert S. Lynd Professor of Sociology Saskia Sassen; and Columbia University Kyriakos Tsakopoulos Professor of Political Theory Nadia Urbinati. SPP Associate Dean for Academic Affairs and Programs and Professor of Comparative Politics Julia Buxton moderated the event that was part of the Frontiers of Democracy series, a Central European University (CEU) initiative to promote open debate, discussion, and the exchange of ideas with a diversity of views about the nature of democracy today. Faculty colleagues from across CEU served as panel discussants. 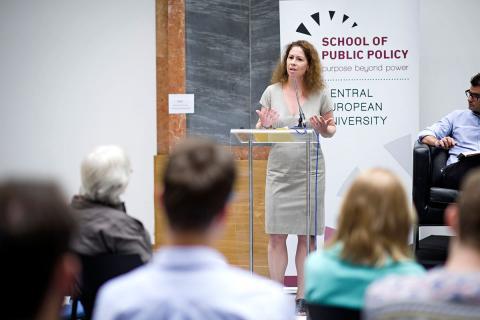 Sheri Berman offered a historic perspective noting that "problems facing new democracies are inherited - not a problem of democracy itself." Photo: SPP/Daniel Vegel

In the opening panel, Berman offered a historical perspective noting that “problems facing new democracies are inherited – not a problem of democracy itself.” She cited examples to show that the process of democratization has often led to the emergence of disorganized forces, from mass protests to new political parties. “Stable democracies take a long time to develop,” she said noting that many Western European countries had “tumultuous stories” before reaching democracy. “The problems facing new democracies today are not unique. Stable democracies went through this too,” observed Berman.

Commenting on Berman’s presentation, Political Science Professor Andas Bozoki observed, “Democracy is an ongoing process. It’s never completed.” In his remarks, Bozóki suggested that Berman explore the role that the international system plays in the democratization of nation states. “Is there a clash between democracy and globalization?” he asked.  Responding to Bozóki, Berman said that regional and international organizations set norms for a particular period and should give hope for democracy in the future. SPP Associate Professor Michael Dorsch opened his remarks by noting the correlation between fiscal crises and democratization trends noting that while political transitions were frequent, consolidations are rare. In response, Berman conceded that consolidated democracies are frequently imperfect, but said that they can correct their own problems over time. 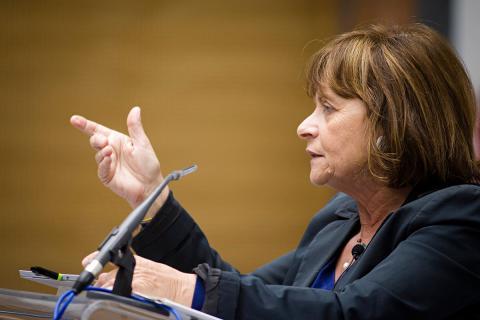 In her presentation, Professor Nadia Urbinati described how different types of democratic disfiguration weaken the linkages between the free forum of public opinion and those governmental institutions that in theory enact and represent the will of the people. She proposed a view of democracy as a "diarchy" of procedure and a world of opinion which, she said, was “based on basic rights – freedom of speech and freedom of assembly.” In Urbinati’s view low participation rates in many electoral democracies meant that “we the people are no longer the people – we are the public watching politicians.”  She was especially concerned about the growing influence of private money in politics, especially in the United States, and how this is distorting democratic procedures, in particular elections – an issue that came up repeatedly during conference critiques of established liberal democracies.

In his role as discussant Public Policy Professor Uwe Puetter focused his observations on European integration, noting that since the early 1990s the scope of European Union activity has risen dramatically, and that this has led to a growing backlash: “National governments are increasingly reluctant to transfer power to European institutions. Puetter noted that it was striking how little national partisan differences matter in the current political environment in Europe. In her comments, Political Science Assistant Professor Lea Sgier said that she would prefer to think in terms of challenges, and not disfigurements, of representative democracy. She went on to speak about populist democracy, which Urbinati identifies as one form of democratic disfigurement. “You have too bleak a view of populism,” Sgier told Urbinati. “Populists cannot create and grow a discontent out of nowhere,” she said. Sgier stressed the importance of establishing institutional arrangements that provide both for majority rule and also respect for minority opinions, in particular highlighting the slow pace of change for women. 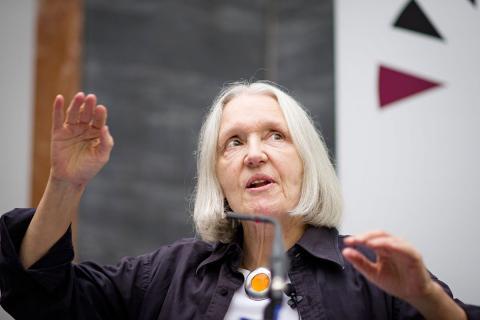 Professor Saskia Sassen opened her presentation with the claim that existing academic and intellectual categories fail to capture current political, economic, and social turmoil.  The 60 million people classified as migrants are “searching for bare life,” she said, “not a better life.” Sassen noted that we lack the categories needed to capture the inequalities, privilege, and exclusion manifest in the vast stretches of dead land and dead water that we have created. On her recurrent theme of ‘expulsion’ from contemporary polities, she asked “Who are we as citizens when so many of us are out?” Sassen spoke also about the role of finance and corporations in American politics.

Sassen raised many thoughtful issues that challenged her audience to investigate “the fuzzy edges of paradigms,” which she described as “the zone where I go digging.” Associate Professor Gina Neff focused her comments on Sassen’s theme of expulsion, observing that: “Saskia Sassen is redefining power through the language of expulsions and incorporation.” Assistant Professor of Legal Studies Charlotte Steinorth discussed how international human rights had so “spectacularly" failed the expelled. To counter exclusion, she emphasized the need to take the interdependence of all human rights seriously. 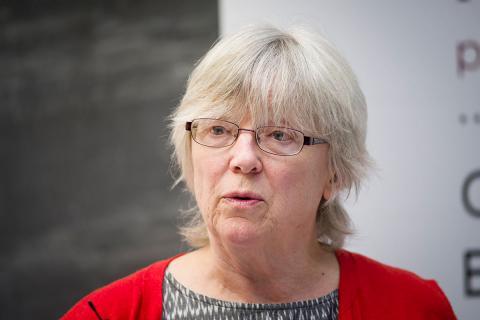 The focus of Professor Valerie Bunce’s talk was hybrid regimes, which she described as having “a mix of democracy and dictatorship with some room for change.” They have regular competitive elections, she explained, but not on an equal playing field. Bunce went on to observe that hybrid regimes have their own logic: “They are systems in and of themselves.” Hybrid regimes work very hard at staying in power and employ both domestic and international strategies to this end. Bunce disagreed with Political Science Visiting Faculty Matthijs Bogaards who described some hybrid regimes as defective democracies. “I’m uncomfortable with democracy with too many adjectives,” she said.   In her remarks, Legal Studies Professor Renata Uitz focused on conceptual difficulties stemming from the gap between constitutional blue prints and political practices in hybrid regimes.

Buxton opened the concluding panel by asking the panelists to address the issue of how private money is shaping political outcomes in established democracies, noting that it was an issue that had come up repeatedly during the conference. Urbinati noted the right to vote included the right to be represented, and to have a voice. “The formation of public opinion is a public good,” she said. She went on to say that the influence of private money in the formation of public opinion was a “political violation.” Berman observed that there has historically always been an uneasy relationship between capitalism and democracy. She said that although private money may be influencing public opinion, there is no evidence that it was determining electoral outcomes in the United States.

Sassen said that what interested her was whether there are other zones where private money was especially influential, and how this was affecting our notion of democracy. “There is always a tension – an incompleteness – in the democratic process,” she said. “We’re not done with democracy,” said Sassen, “but we need a new language.” Bunce noted the dramatic ways that the regime landscape has changed since the Cold War. The panelists agreed that low participation posed a threat to democracy. “The right to vote should be a citizenship right,” said Urbinati. Berman noted that although fewer people voted in many democracies now than previously, there were ways in which more people were participating in the political process now than ever before. She went on to observe that this increased participation was one of the challenges for democracy. “It is a lot easier to have a collective when the community is narrow,” she said. Sassen noted that while it was true that some previously marginalized communities were gaining rights, those in the core were losing them. 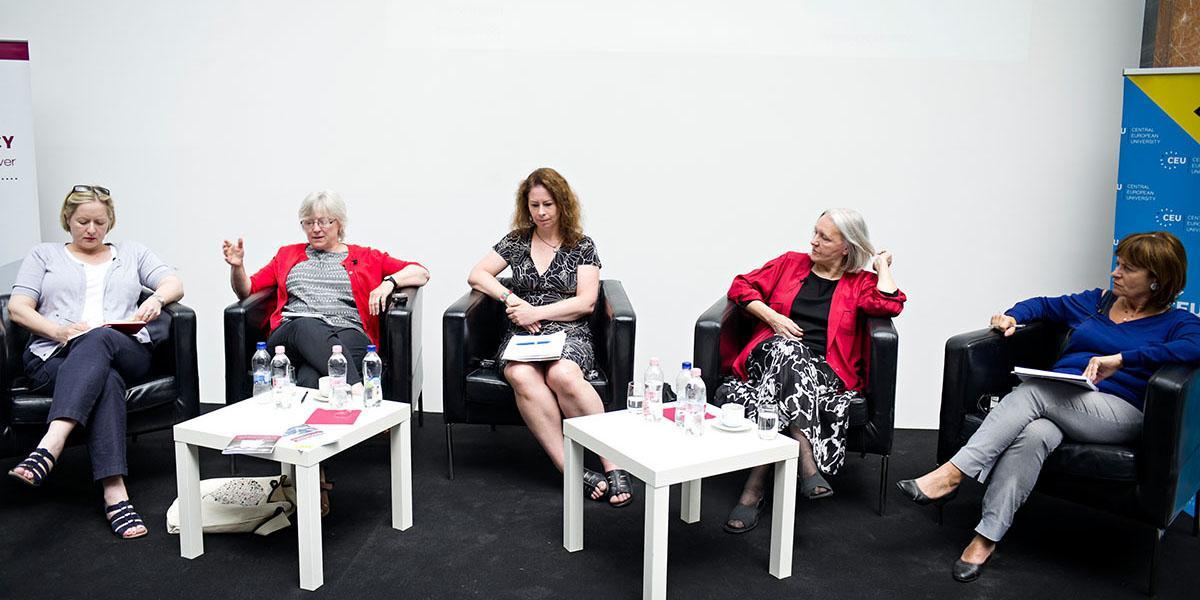 The four keynote speaker wrap up the two-day conference during a final panel. Photo: SPP/Daniel Vegel

In his remarks summarizing the five panels, CEU President and Rector John Shattuck noted that it had been “an extraordinarily rich two days.” He went on to observe that several themes had emerged during the course of the “enlightening” but also “troubling” discussions: that the demand for participation was growing and greater than it had been in the past; and that the greatest threats to democracy came not from external forces, but from within.

Shattuck said that CEU would continue to explore these and related issues in a conference scheduled for fall 2015 (“Democracy and Its Discontents,” October 9-10), and throughout its 25th anniversary year.

Videos of the full conference and interviews with each of the four lead speakers will be available on this page soon.