Balkan Wars Were a 'Failure of Imagination' on the Part of the International Community, Shattuck Says

This November will mark 20 years since the Dayton Peace Agreement ended the war in Bosnia. International intervention happened too late, according to CEU President and Rector John Shattuck and his former colleague John Kornblum, who participated in the Dayton negotiations and discussed the process in Budapest on July 6 at the opening of the 2015 session of the Jozsef Antall Summer School.

“The war in the Balkans was something hardly anyone expected, but it demonstrated how much you cannot ignore history,” said Kornblum, one of the architects of the Dayton agreement, referring to the series of wars in the region and its role in the start of WWII. “All of us somehow believed we had created a new situation and we didn't expect conflict in the Balkans or with Russia. We, the Americans, neglected completely the points of friction in Europe, the 'tectonic plates.' The point is, we believed in the methods we had used to get us to the end of the Cold War; we didn't think we needed to worry about them not getting us where we needed to go.”

Shattuck noted that international diplomats and officials “missed things about (Serbian President) Slobodan Milosevic in the early days.” This included his ability to curry public favor and to drum up nationalism and feelings of discontent toward Kosovo's “ethnic intrusions.” Kornblum added that they hadn't done much investigation into Croatian President Franjo Tudjman's motives in Croatia either. 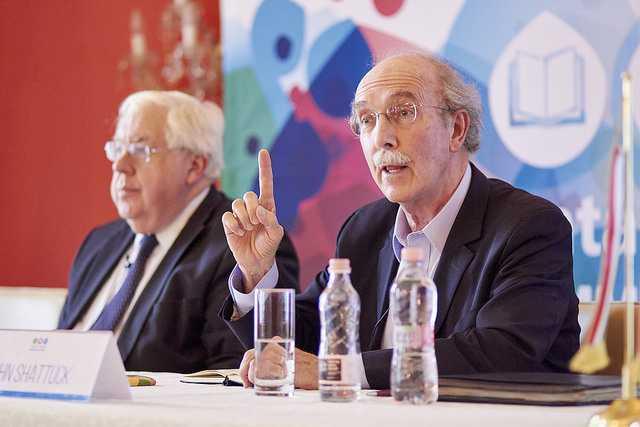 The ultimate failure in the Balkans in the 1990s was the result of several factors, he said, one being that U.S. officials believed that Europeans were handling the problems. President Clinton was occupied with a number of domestic issues in the U.S., including kickstarting the economy and pushing a national healthcare plan. The country was also just coming out of the first Gulf War. In addition to these factors, then-U.S. Secretary of State James Baker visited Milosevic in Belgrade and, after his meeting, famously said, “We ain't got no dog in this fight.” Sadly, Kornblum said, this confirmation on the part of the U.S. gave Milosevic the room he needed to continue the war.

Ultimately UN peacekeepers – a Dutch battalion – were brought in in 1994 but they proved ineffective and failed to protect 8,000 Muslim men in Srebrenica (a so-called UN safe area) who were murdered in the worst genocide in Europe since the Holocaust. Kornblum noted that the peacekeeping efforts didn't work because there was no peace to keep; Milosevic and Tudjman were, indeed, conducting wars.

“This was partly due to an old-fashioned idea of what peacekeeping meant,” Shattuck said. “They literally thought it meant to keep the peace – to not get involved in conflict, not take sides. In the Balkans, there were all sorts of aggressive acts – human rights violations, forcible movements of people – and peacekeepers couldn't deal with this. It was a failure of imagination on the part of the international community, including the U.S.” 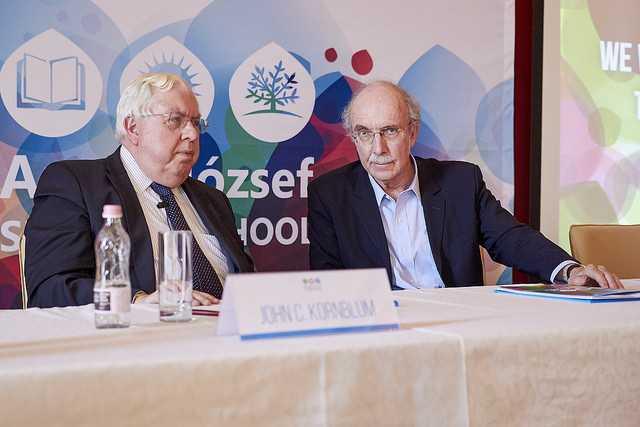 In his capacity as assistant secretary of state for human rights, democracy and labor, Shattuck was sent to the Balkans to investigate what was happening on the ground. He was the first international diplomat to reach Srebrenica after the genocide. He was able to report back to his colleagues in Washington with firsthand accounts from survivors of the genocide. Backing up his reports were CIA aerial photos that confirmed the presence of mass graves.

“After Srebrenica, the UN Security Council voted unanimously for the use of force to push back on aggressive activities of Bosnia Serbs, Bosnian Croats and the Croat army,” Shattuck said. “This really shifted the nature of international engagement.”

President Clinton designated diplomat Richard Holbrooke as the chief peace negotiator. With Shattuck and other designees' on-the-ground reports, Holbrooke could confront the leaders. “He told them, 'if you don't agree to start the peace process, we will resume the NATO bombing,'” Shattuck recalled, “It gave them a set of incentives to move forward in peace or face more bombing or indictment in the International Court of Justice.”

The near real-time reporting from the ground also served as an incentive to get the parties to the negotiating table in Dayton, Ohio.

“It created a sense that the peace negotiators were aggressive and had force behind their diplomacy in the sense that we would've continued NATO bombing if they hadn't changed their behavior,” Shattuck said. “It also proved that our fact-finding missions were even-handed – we were investigating these incidents in all involved countries.”

To negotiate peace in Dayton, Kornblum noted it was vital to create a Bosnian federation with two functioning parts. He emphasized that they could not destroy the Republic of Srpska. He is still proud of setting up the common currency that is still in use today.

“There was no unified state,” he said. “What you had was two totally hostile parties who had been forced by the international community into a framework. Some people say Dayton is a failure because it's still in force; I say it's a success. The framework of Dayton continues to allow for a functioning administration even if they still have not come close to feeling unified.”

Both Shattuck and Kornblum acknowledge that there were failures in the Dayton Peace Agreement. Kornblum wishes that they would have pushed for the creation of civil society in Bosnia and laments that they were not able to break through clans, local leaders and embedded economic structures. Shattuck believes the biggest misstep of Dayton was failing to call to account war criminals at national, regional and local levels.

“Dayton did not build in framework for arresting war criminals,” he said. “Democracy can never be imposed from the outside – or even assisted – except to call to account those who are responsible for war crimes and genocide.”