Multiple failures on the part of the international community, the EU and Hungary led to the refugee crisis that unfolded in Hungary since early summer, according to CEU President and Rector John Shattuck, speaking at a Sept. 30 panel discussion with CEU faculty about the refugee crisis. He urged a swift and serious effort to fund the humanitarian agencies dealing with the crisis, and noted the extraordinary response from civil society, including the CEU community, to the humanitarian crisis.

“The present situation is in many ways, a glimpse of the new world we are entering. It points to failures of policy and failures of various aspects of human interaction that we often put under the label of international relations.”

Budapest witnessed a very strong humanitarian response from the civil society. “The crisis was not only symbolized by razor-wire fences and xenophobia, but also great efforts by the civil society, including many of the CEU staff, students and faculty volunteering their time, efforts and expertise to help,” said Shattuck emphasizing that this attitude “lies at the heart of CEU’s mission”. He listed volunteer work at train stations, donation drives, WIFI hotspots for stranded refugees, social media information exchange, and opening classes to refugees as a few of the initiatives the CEU community organized or took part in.

Developing a coherent asylum process across Europe with the involvement of other countries is also vital in solving the crisis, Shattuck said.

“The Dublin system is manifestly unjust – we, EU asylum lawyers, have been saying this for 25 years,” said Boldizsar Nagy, associate professor at the Department of International Relations and an expert on refugee law. EU laws define refugee status as “a uniform status of asylum for nationals of third countries, valid throughout the Union,” though in Nagy’s views the law and reality often diverge. The actual procedure varies from state to state, and there is no “substantive solidarity in the system”.

Nagy also highlighted the fact that the distribution of asylum seekers is unequal. “Europe is not flooded – some countries are,” he added, acknowledging that perimeter states are overloaded with applications, which is one of the major causes why the system dysfunctions.

“Free rider states” Hungary, Austria and Greece not only ignore their responsibility to register asylum seekers, but also actively partake in their transportation, though in the Schengen system asylum seekers are not allowed to move freely. Hungary’s actions rely on deterrence, obstruction, punishment, free riding and breaching the law, he said. 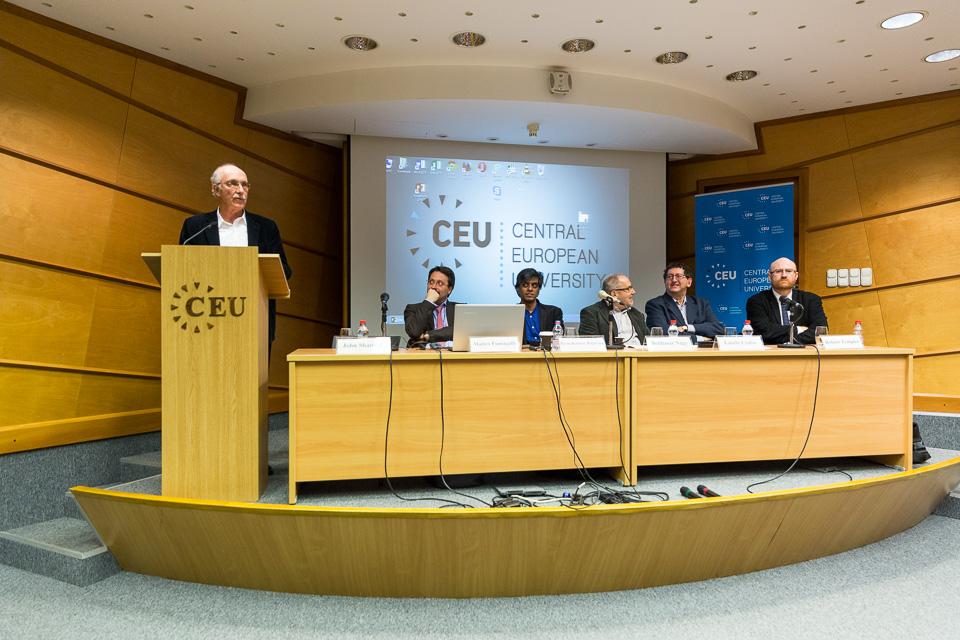 Listing the EU’s responses to the situation Nagy mentioned the decision on relocation, which he emphasized is only a “temporary measure”. He also mentioned that EU will step up its funding of refugee camps in the Middle East. Setting up a common EU border guard and revising the Dublin system are also often mentioned as necessary steps.

Pakistani and Bangladeshi migrants “have absolutely no chance to get refugee status, though they leave their homes and embark on a highly dangerous journey for a reason,” said Prem Kumar Rajaram, associate professor at the Department of Sociology and Social Anthropology. This is due to the narrow legal definition of a refugee, he said. Several types of persecution, such as economic persecution are simply not covered by the Geneva convention, he added, calling for European States to broaden their legal concept of refugees.

The use of the word “crisis” exoticizes the situation, giving priority to the humanitarian angle and distancing it from politics, Rajaram said. “There is a feeling that this is something different from our political norms. This is one of the reasons why governments might feel that certain acts of violence are permissible. Though they are certainly not,” he said. The present situation is not extraordinary, he said, since “mobility, and movement of people has always been a part of history”. 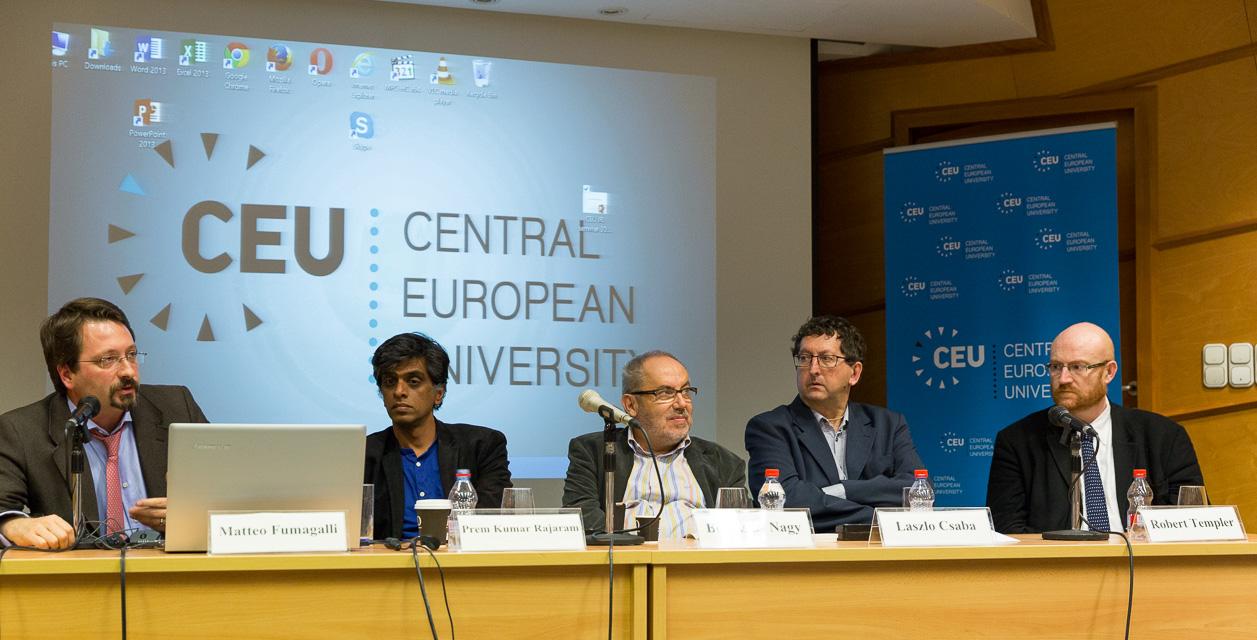 Speakers of the panel discussion about the refugee crisis. Image credit - CEU

The Visegrad Four countries (Hungary, Slovakia, the Czech Republic and Poland) often use a set of pretexts to explain their reluctance to compromise in talks with the rest of the EU about the refugee crisis, according to Laszlo Csaba, university professor at the Department of International Relations. V4 states refer to their “homogenous culture,” their passive stance on EU’s policies towards the global South and their general fear of “being overruled by the bigger EU states.” Their fear was partially justified by the way the EU accepted the refugee relocation quotas using a questionable majority vote, he added.

Since the Schengen and Dublin systems were a given for new member states, V4’s identification with them is not strong, and they also cite their lack of responsibility in the situation in Syria as a reason for distancing themselves from the EU quota system. But Csaba sees the rise of populism – which he emphasized to be a pan-European phenomenon – as one of the main obstacles of a consensual solution and also a great danger.

“The danger that mainstream parties will incorporate the agendas and narratives of the populist parties is grave and real,” Csaba said.

“There is a great discrepancy between the real numbers and the actual policies,” Csaba warned. The UK proposed to receive 20000 refugees in four years’ time. “We have that amount of people cross the border at Hegyeshalom through one weekend,” he added.

The mass migration from Syria is caused by the constant threat to civilian lives, posed mainly by the Bashar al-Assad regime, which is responsible for most of the civilian casualties and the inhuman conditions, according to Robert Templer, professor at the School of Public Policy and director of the Center for Conflict, Negotiation and Recovery.

“The way Assad’s regime is using barrel bombs, targeting densely populated areas has a lot in common with the terror-bombings of Dresden by the allies in World War II,” Templer said. It is difficult to see another reason behind these actions than the planned expulsion of large parts of the population, he added.

Templer is convinced Vladimir Putin’s involvement in Syria is a “political gambit” and it would only serve Russia’s ambitions at regaining its role as a global power, and that there is “very little chance that we will see Putin actively engaging ISIS”. Templer not only called for a stronger humanitarian response, but also for a stronger geopolitical answer from the EU to ensure that policies of population expulsion and policies aimed at undermining the EU from the inside or the outside will not be successful.