Bosnia-Herzegovina must move beyond ethno-nationalist politics, away from corruption, and toward common solutions to poverty and unemployment in order to achieve stability and prosperity, according to those attending the conference “Bosnia and Herzegovina: Twenty Years after Dayton” at CEU November 18. CEU President and Rector John Shattuck, who played a key role in the Dayton peace negotiations, hosted the event, in cooperation with CEU’s Center for European Union Enlargement and the Friedrich Ebert Stiftung.

“This conference is to recognize the limited but important achievements of Dayton, but it is not a celebration – it’s a sober assessment of what’s ahead,” Shattuck said in his opening remarks. “Here we have a new generation of civil society activists and scholars who are imagining and shaping a Bosnia-Herzegovina based on diversity, inclusion and the values of open society that we hope will permeate the new developments in Bosnia-Herzegovina.”

Shattuck, then United States Assistant Secretary of State for Democracy, Human Rights and Labor, was the first international diplomat to reach and interview the survivors of the massacre at Srebrenica. Shattuck’s reporting led to a more forceful response, to diplomacy backed by force. 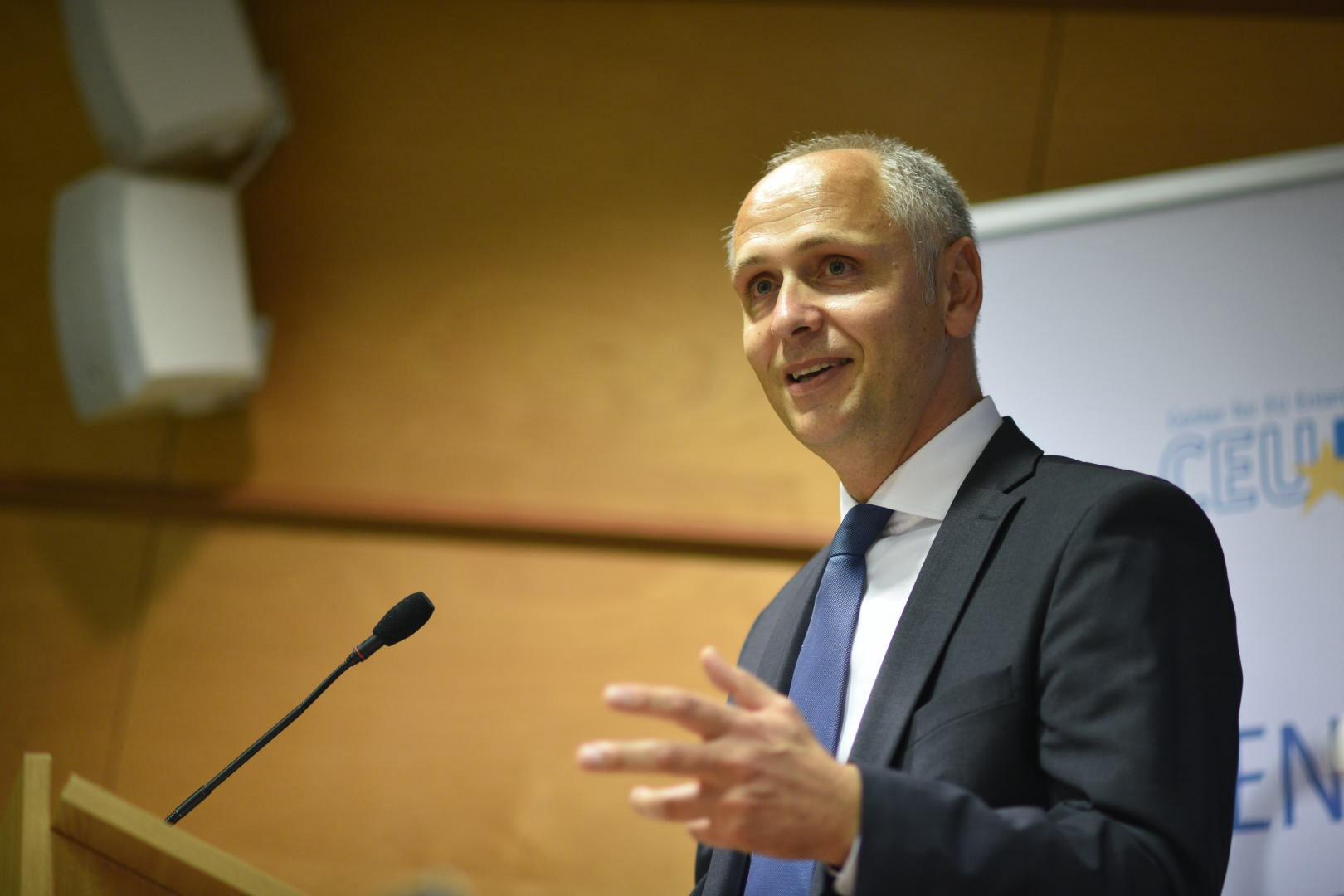 Amer Kapetanovic, founding member of the Foreign Policy Initiative Think Tank, portrayed Bosnia in recent years as in “perpetual political crisis” due to an inability to compromise. Institutions are not empowered to bring about change, and the country remains divided into three, with a “serious democratic deficiency.”

“There are enormous scars on our economic tissue, on our society, way of thinking, and how we see the future of the country,” Kapetanovic said. He now believes that progress can come even within the context of the Dayton legacy, he said. “The new commitment of domestic leaders, and the new approach of the European Union is encouraging. If we use the momentum as a new paradigm, we can pursue substantial reforms that will bring about great change.”

The next speaker, Jasmina Husanovic of the University of Tuzla, was more skeptical about the commitment of politicians, seeing little change after the demonstrations in the streets in February 2014. In the wake of the protests, there was more talk about how to contain such protests in future than about how to create jobs and end poverty, she said.

“There is a dangerous lack of genuine discourse,” she warned. “People actually want work. The graffiti on a government building burned in Tuzla said “Death to Nationalism!” and “We are hungry!” in all three languages.”

Mirna Jusic, a graduate of CEU now at Analitika Center for Social Research in Sarajevo, named employment as the biggest socioeconomic challenge, with a jobless rate in 2014 of 27.5%. Emphasis must be placed on the quality of jobs, not just quantity, and on employment and income security, she said.

Crippling bureaucracy and rampant corruption are also major obstacles to progress, according to Ole Hammer, political advisor at the European Union Special Representative in Bosnia and Hercegovina, and Karla Koutkova, a doctoral student at CEU.

Bruce Berton, principal deputy high representative and Brcko district supervisor said what remains to be done in Bosnia-Herzegovina is to create and maintain sustainability and prosperity. He described the tense post-war years and the “enormous diplomatic and military investment that the international community has provided since 1995.” He noted that as the EU agenda has started to gain real traction in Bosnia-Herzegovina, there's been an intentional reduction in day-to-day governance by the international community. Police and military forces in Bosnia-Herzegovina were thoroughly trained and are now participating in peacekeeping missions around the world. 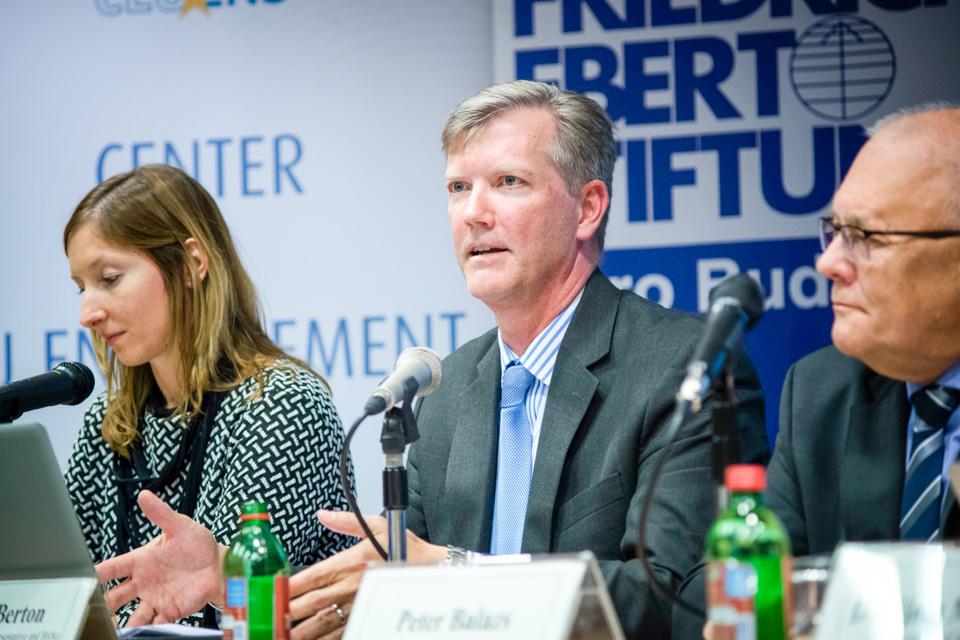 He noted that Bosnia-Herzegovina still struggles economically, but underscored citizens' commitment to making sure their legacy is more than the devastating civil war that has defined them over the past several decades.

“The mayor of Srebrenica is really trying to move the city forward to what is, hopefully, going to be a thriving town. And it's not just political parties and well-known leaders but local companies and citizens participating in their town's future.”

CEU scholar Sanja Tepavcevic spoke about Bosnia-Herzegovina's economy and how Russian investment has boosted it. She noted that between 2006-2012, a Russian-owned oil company invested roughly €120 million in Bosnia-Herzegovina and, by 2011, Russia had become the fifth-largest investor in the country. This might influence the way Bosnia-Herzegovina is seen on the international stage, she said.

After the Russian company Zarubezhneft announced its investment in 2006, Bosnia-Herzegovina's credit rating was upgraded from B3 to B2 (according to the Central Bank of Bosnia-Herzegovina). Aside from being part of the former communist Yugoslavia, Bosnia-Herzegovina has even deeper economic connections to Russia. Bosnians who live in Russia now are remnants of the so-called Soviet business class who went to Russia mostly to work for construction companies, Tepavcevic said. When war in Bosnia started, they stayed.

“They had favored connections with Russian politicians and influencers. They used their connections in the Kremlin to invite Russian companies to bring their finances to Bosnia-Herzegovina,” Tepavcevic said.

In terms of other investors, panelist Esref Kenan Rasidagic of the University of Sarajevo pointed out that Turkey is not among the top five investors in Bosnia-Herzegovina, but Lithuania is. “But you only hear about Turkey, not Lithuania.”

Bosnia-Herzegovina has been in a perpetual state of transition, according to the University of Banja Luka's Danijela Majstorovic. After the 2014 protest (the so-called Bosnian Spring), the population of Bosnia-Herzegovina could no longer be seen as passive, she said. 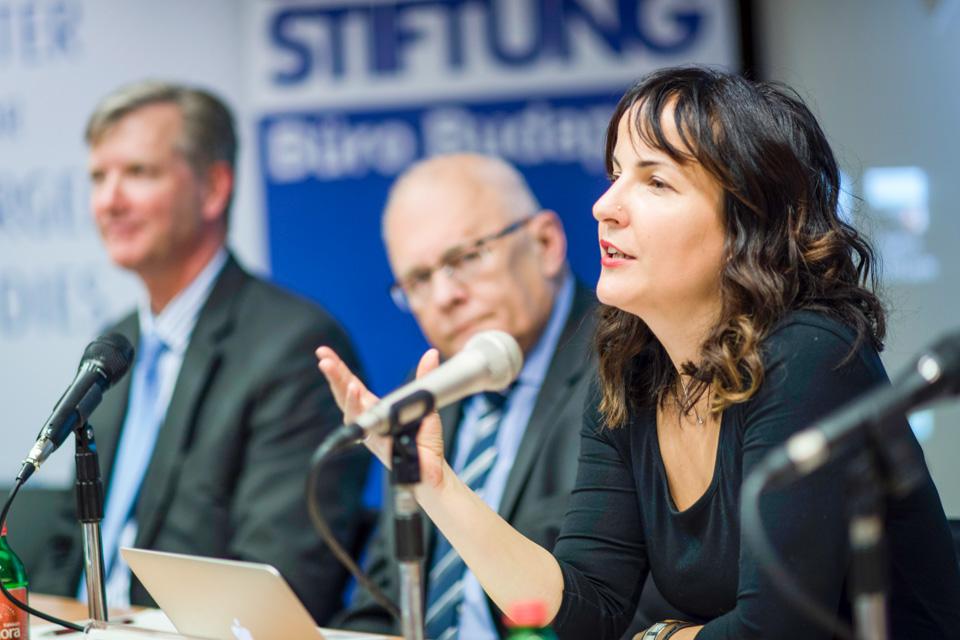 Danijela Majstorovic from the University of Banja Luka talks about the so-called Bosnian Spring protests of 2014. Image credit: CEU/Daniel Vegel

“The protest was based on demands for social justice; it was not an anti-Dayton stand,” she said. While Dayton is partly responsible for the political stability, it does aggravate citizens in general and, in terms of power-sharing, it has precipitated Bosnia-Herzegovina's current economic crisis, she said.

Natalia Andrea Peral, a doctoral student at CEU, observed that “When I was in Bosnia-Herzegovina in 2010 I not only saw buildings in ruins, but also a broken society. My interviewees all insisted that we should meet in cafes used by their own ethnic groups. Luckily I was accommodated in three different neighborhoods, but this experience instantly showed how fragmented this society is.”

According to Peral, in the case of Bosnia-Herzegovina, the question of coexistence moves beyond cooperation. The massive displacements of the population diminished the original heterogeneity of the country. “Repatriation tended to reinforce ethnic ‘strongholds.’ These territories were controlled by local warlords of the ethnic group in majority, which led to a fragmented state,” said Peral. “One of the lessons learned from this, and to be observed in Syria when repatriation may start, is that the international community will have to control the funds designated for rebuilding the country and not give them directly to local leaders without restrictions.” 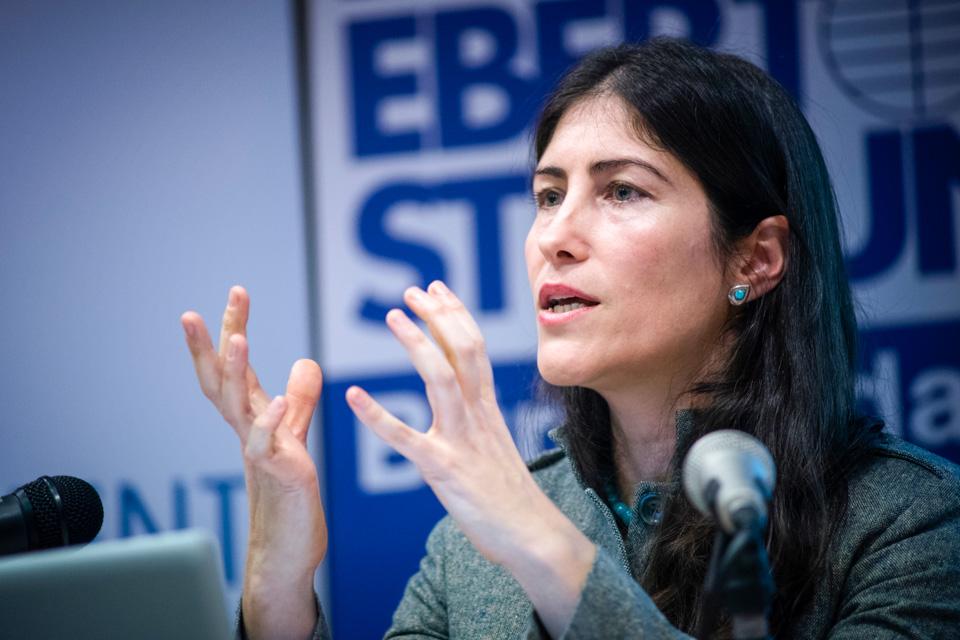 “You could read many comments on Twitter about the European Cup qualifier match against Ireland asking why the Bosnian team is not singing their anthem. Well, because there are no lyrics, and that symbolizes very strongly the state Bosnia is in,” said Roland Schmidt, a doctoral candidate at CEU.

“There is a constant stalemate between parties, based on ethnopolitics. This is the reason why such reforms have never succeeded in recent years,” Schmidt said. Analyzing recent polls, identification with Bosnia-Herzegovina is very low with Bosnian Serbs who also feel themselves endangered in the country. In an international context it is the low level of trust both towards members of other ethnicities, but even to the recipients’ own ethnicity that is striking in Bosnia-Herzegovina.

“It is not ethnic and religious relations that concern people most, according to the polls. They even think that politicians talk too much about these issues instead of improving on the high unemployment,” said Schmidt. The next panelist, CEU doctoral candidate Elena Stavreska, underpinned Schmidt’s findings.

“We have to understand what peace means to those living in Bosnia-Herzegovina,” she said. “It is not primarily about how Bosnians, Serbs and Croats will become friends, but rather about how a normal life, prosperity and a positive vision for the future can be created,” said Stavreska, summarizing remarks by a prominent member of the Tuzla Plenum also known as the Bosnian Spring. 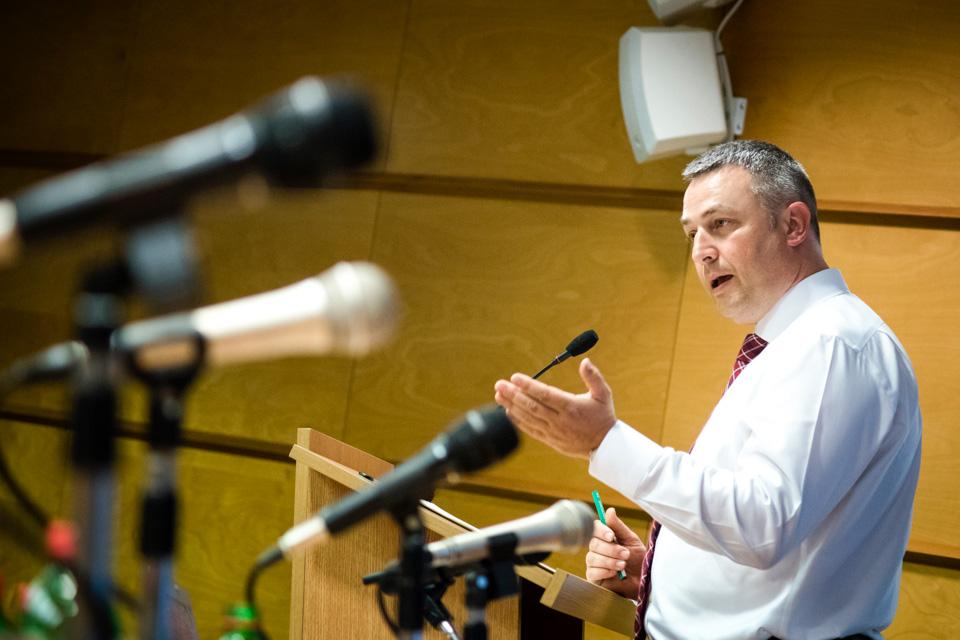 “We believe it can be done,” he said. “If there is significant progress on the reform agenda, Bosnia-Herzegovina will submit an EU membership application, and it would be accepted, and we can start negotiations.”

“I take great hope away from this conference,” Shattuck said. “It brought new younger voices together to talk about the future of Bosnia-Herzogovina. There’s promise in what they have said.”