The First World War, a tragedy that "remade the world we live in for the worse in every conceivable way," was more than a battle between rival alliances – there were dissenters and families divided by conflicting loyalties, according to Adam Hochschild, who tells their stories in his most recent book, "To End All Wars: A Story of Loyalty and Rebellion, 1914-1918." Hochschild, who is also a lecturer at the Graduate School of Journalism, University of California, Berkeley, spoke at CEU Nov. 26 at an event hosted by the Rectorate and the Department of International Relations.

The scale of the war and its effects were of a different degree of magnitude to any other. Military and civilian deaths, direct and indirect, totaled 20 million – six times the death toll of any previous war in Europe. It left destruction never before seen on the continent as retreating armies poisoned wells, cut down fruit trees and destroyed forests, intent on causing lasting damage. It destroyed empires – the czar's, the Ottoman, the German, and the Austro-Hungarian.

"The tremendous toll brought to an end forever the period of Victorian optimism," Hochschild said. "It led to a new awareness that human beings had the power to totally destroy the environment they lived in." 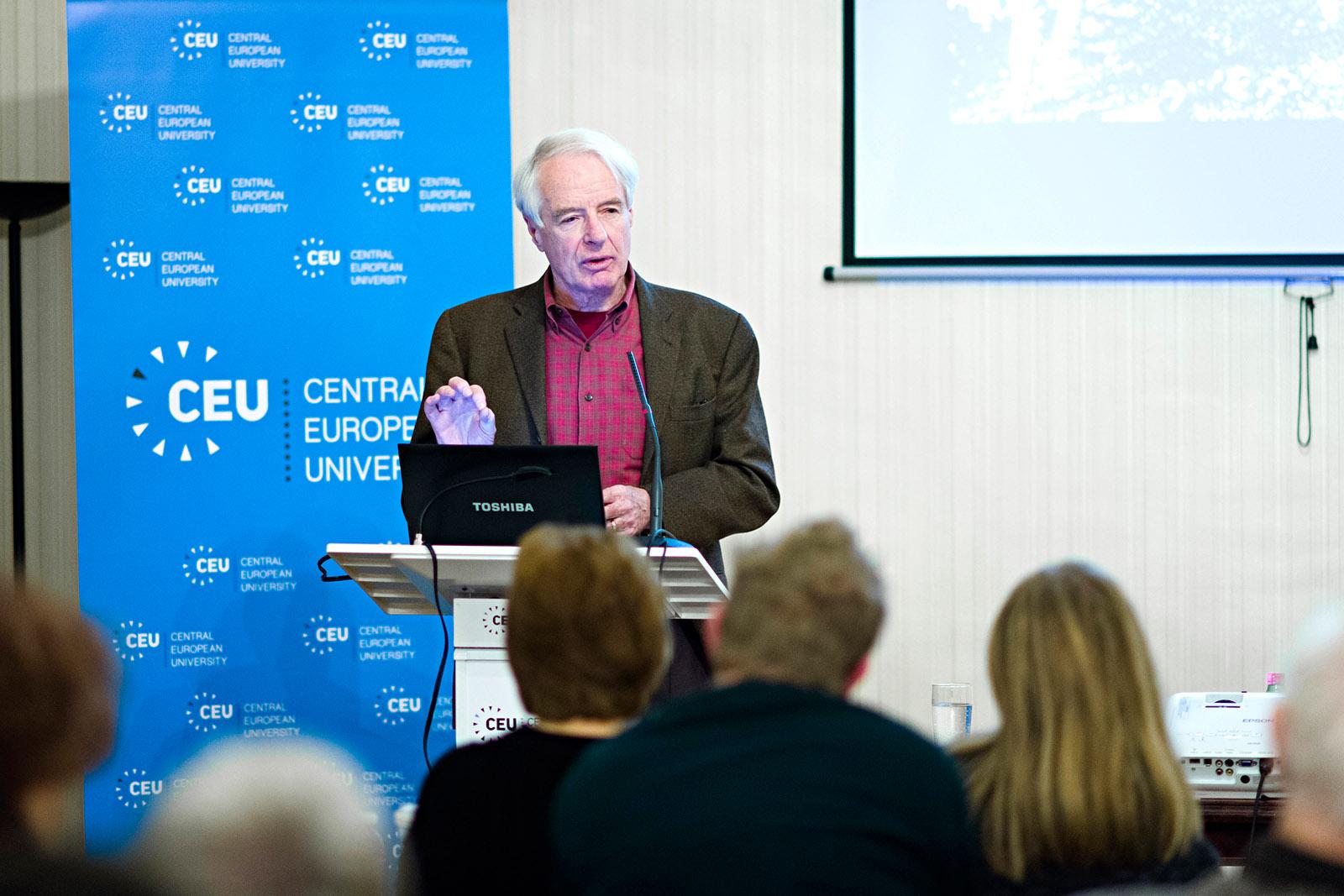 Adam Hochschild, author of "To End All Wars: A Story of Loyalty and Rebellion, 1914-1918" and lecturer at the Graduate School of Journalism, University of California, Berkeley. Photo: CEU/Daniel Vegel.

It started based on several illusions – first, that "victory would be quick and easy," he said. It also seemed that soldiers did not expect to be in danger – "how otherwise can we explain the colors of the uniforms?" Hochschild asked, showing illustrations of the bright red and blue worn by both the French and Austro-Hungarian troops until 1916. Third, military leaders still believed that cavalry could play a role in winning the war – Germany invaded France with 40,000 men on horseback. Later it became clear that horses were a hindrance in a war characterized by trenches, barbed wire, machine guns and poison gas. These illusions stemmed from the experience of colonial warfare, most often fought against poorly armed, untrained rebels in Africa and Asia.

Hochschild's book traces not only the tragic stubbornness of generals pursuing a new kind of war with old methods, but the stories of the dissenters – of which there were many, especially in Great Britain. He found his "cast of characters" for the book when he discovered that Charlotte Despard, a noblewoman turned suffragette and defender of the poor and homeless, had a brother named John French – commander-in-chief of British forces during the first year and half of the war. The two kept in close contact despite their differences, until French was sent to suppress the Irish rebellion in 1918 and Despard went to Dublin to support the fight for independence.

Philosopher Bertrand Russell was another dissenter, who was honest about how difficult it was to maintain his opposition during the wave of excitement and enthusiasm for the war in Britain and amid the persistent propaganda. Russell spent six months in prison during the war, as did many of the 20,000 British men of military age who refused conscription or alternative service. While in prison, journalist E.D. Morel published a "newspaper" on toilet paper for a year before the publication was discovered and he was sent to solitary confinement. 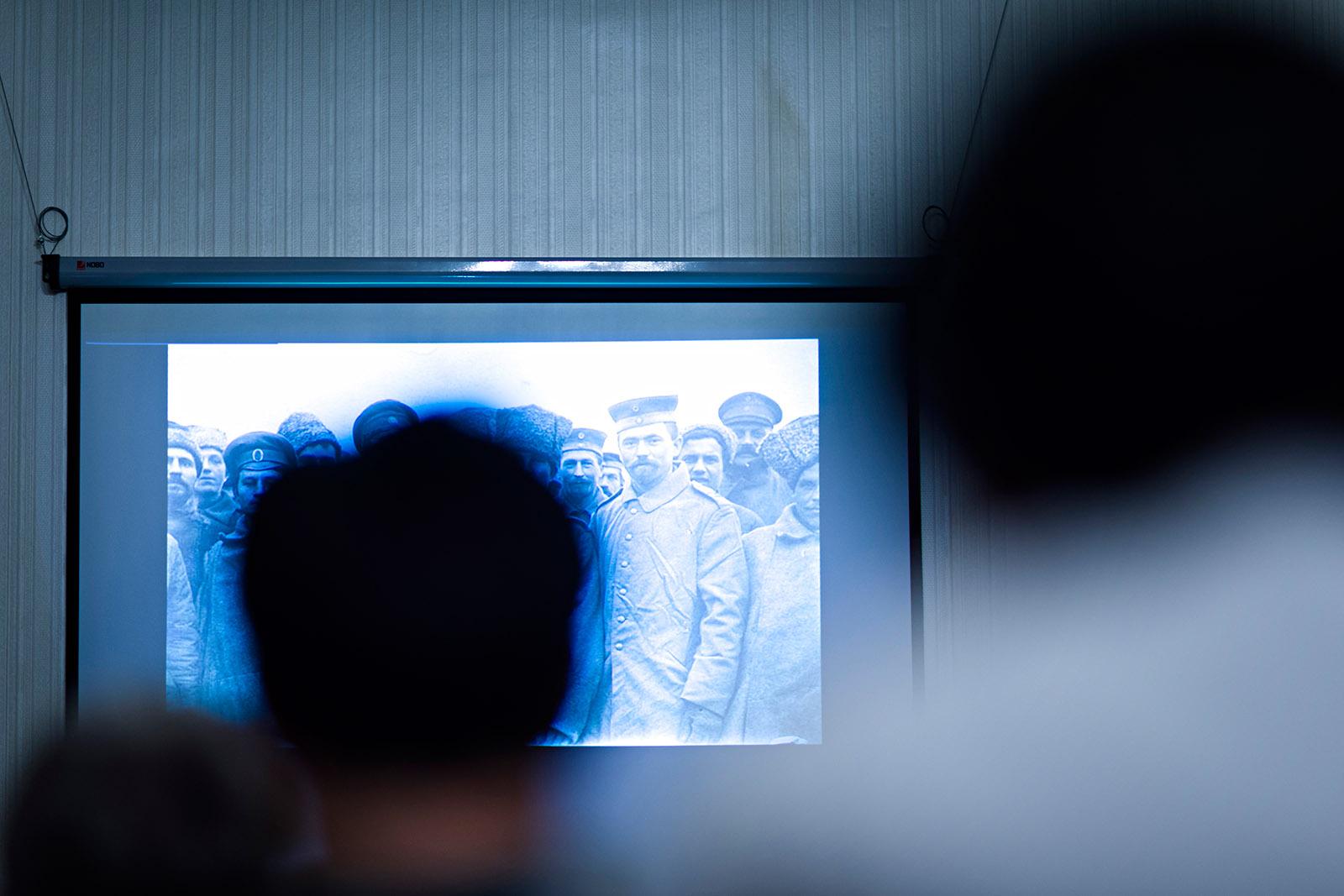 Hochschild showed photos and footage from the pre-war era and propaganda films during his talk at CEU. Photo: CEU/Daniel Vegel

Human rights campaigner Emily Hobhouse, who had witnessed and tried to relieve the horrible conditions at concentration camps during the Boer War, traveled to Germany in 1916 to meet with the German foreign minister, an acquaintance of hers, to try to work out terms of a peace agreement. Her efforts went unnoticed as she was unable to make contact with high officials back in the U.K.

"She deserves to be remembered as she is the only human being who went from one side to the other and back again in search of peace," Hochschild said.

Dissent was not only present in Britain, Hochschild said. When the socialist revolutionary movement began, Russian and German troops stopped fighting at one point and began fraternizing. During 1917, an estimated 1 million Russian soldiers left their posts and walked home.

Centenary anniversary commemorations starting last year have offered some hope for viewing the war differently, Hochschild said. In December 2014, commemorative football tournaments were held in French and Belgian towns, near the battlefields where combat stopped at Christmas 1914 and troops from opposite sides fraternized and played football. The 2014 tournaments were endorsed by governments and football associations, something that wouldn't have been possible at the 50th anniversary, Hochschild said.

"My hope is looking back at this period we'll remember not just the politicians and the generals but those who tried to stop the war, even though their efforts were in vain," Hochschild said. "They can be an inspiration to us today."