Some Kind of Opposition: Exhibition by Axel Braun

Some Kind of Opposition is an exhibition by Axel Braun based on films by Adam Csillag and Fekete Doboz slated for March 11- May 1, 2016 at the Vera and Donald Blinken Open Society Archives. The opening event will take place March 10 at 6:30 p.m. at the Archives' Galeria Centralis with remarks by Istvan Rev, director of the Archives and Katalin Timar of the Ludwig Museum – Museum of Contemporary Art.

The artistic research project revisits the unresolved controversy about the Gabcikovo-Nagymaros Dam System, a disputed infrastructure project that was partly established along the Danube in Hungary and Slovakia since 1977. 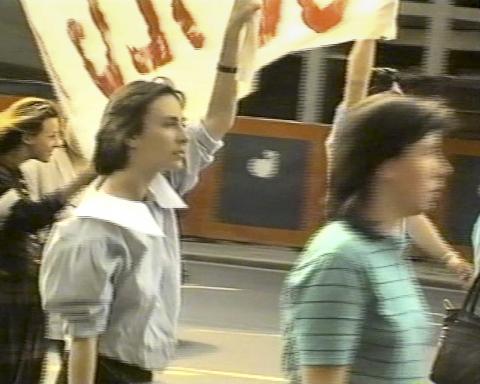 The exhibition traces the activities of Duna Kör (Danube Circle) – one of the first environmental initiatives in Central and Eastern Europe – and its substantial role as a civic movement during the years of regime change in Hungary. Video footage from the 1980s and early 90s by documentary filmmakers, Ádám Csillag and Fekete Doboz (Black Box) provides the base for Braun’s artistic approach to the topic.

Found footage from archives and personal collections as well as new photo and video productions are contextualized within the framework of a multimedia installation. On the one hand, the exhibition tells the story of a civic movement that successfully opposed an authoritarian regime. On the other hand, it provides an ideal example for the complex processes and discussions that characterize the developments of our living spaces in the age of the Anthropocene. Furthermore it is meant to contribute to the current discussions about European integration and anti-democratic tendencies in Central and Eastern Europe.

The exhibition is supported by Kunststiftung NRW and the Vera and Donald Blinken Open Society Archives. The artistic research project has been supported by a Visegrad Scholarship at the Open Society

Archives in 2014 and an Artist-in-Residence Fellowship by the Institute for Advanced Studies and Visual Studies Platform at Central European University in 2015/16.

A collateral program with panel discussions, presentations and film screenings will extend the focus of the exhibition. Program updates and further information are provided on www.osaarchivum.org and www.somekindofopposition.org

Axel Braun (*1983, Germany) is an artist and photographer. His complex artistic research projects deal with controversial infrastructure projects, tautology as an attempt to understand reality as well as failed utopia in art and architecture. SOME KIND OF OPPOSITION is a new case study in his long-term project Towards an Understanding of Anthropocene Landscapes.

For his work and projects he received grants and prizes, e.g. by Goethe Institut, RWE foundation and the Young Artists’ Award of North Rhine-Westphalia. Since 2006 his work has been presented in group and solo shows, e.g. at Palais des Beaux-Arts (Paris), Hartware MedienKunstVerein (Dortmund), Kunstmuseum Bochum and tranzit.sk (Bratislava).