Central European University honored over 300 long-serving faculty and staff at an event to officially launch the 25th anniversary of the university’s founding in 1991. The March 18 event, “In Service to Open Society,” recognized 11 academic departments and special programs that were launched in the first five years, and faculty and staff who have been with CEU for more than 20 years were presented with a symbolic key to the University. 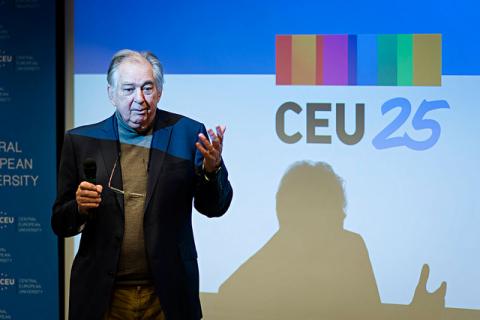 Dr. Bill Newton-Smith, CEU’s founding executive chairman, described the atmosphere at conferences in Dubrovnik in 1988 and 1989, where the idea of a new university began to take shape, as “absolutely electric.” By the end of 1990, Hungarian-American financier and philanthropist George Soros was ready to ask Newton-Smith to create a University that would instil and promote the values of open society and democracy.

“All we had was a half-built building in Prague, and we had to build a university to open in September,” Newton-Smith said, still incredulous. “The only way to achieve this was to empower entrepreneurial academics to do it. And they did it. They got a university going, and that’s why the initial faculty was so committed.” 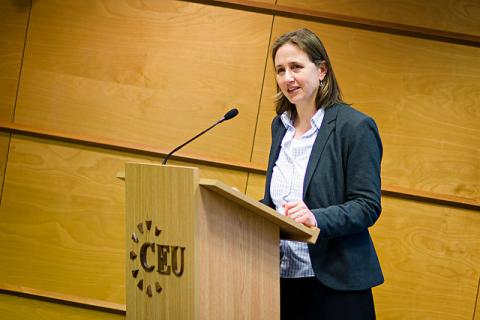 Professor Agnes Batory, also an alumna of the Department of International Relations (1998), spoke of how inspiring CEU was to someone accustomed to the staid old ways of higher education in Eastern Europe.

“At CEU, professors were guiding me to ask the right questions… and reminding me that there’s often more than one right answer,” she said. “CEU is about critical thinking, and about relevance to real-world problems.”

The remarks were followed by a MA student Nilofer Khan Habibullah, who performed her poem, “Diversity” for the packed auditorium, and a video of staff and faculty stories about their years at CEU.

The honorees are listed on CEU’s 25th anniversary website here. The selection of the photos can be found here.