May 18, 2016
News
CEU Planet
Department of History
The Office of the President and Rector

The Last Days of Stalin, the latest book by Joshua Rubenstein, associate at the Davis Center for Russian and Eurasian Studies at Harvard University, demystified a very unique period of Soviet history at a book launch at CEU on May 3.

Beyond his scholarship, Joshua Rubenstein is a long-time human rights leader, CEU President and Rector John Shattuck said in his introduction. Current Russian leadership is trying to copy some of Stalin’s methods, and his views on nationality and control over borderlands are shaping Russian approach today, Shattuck added.

“My book starts happily with Stalin’s death, and ends happily, with Beria’s death,” Rubenstein said in introducing his volume. (Lavrentiy Beria, chief of the Soviet secret police and, following Stalin’s death, the First Deputy Premier until his arrest on June 23, 1953.) The book opens with Stalin’s death, travels back to 1952, and covers the opportunities the dictator’s demise presented. 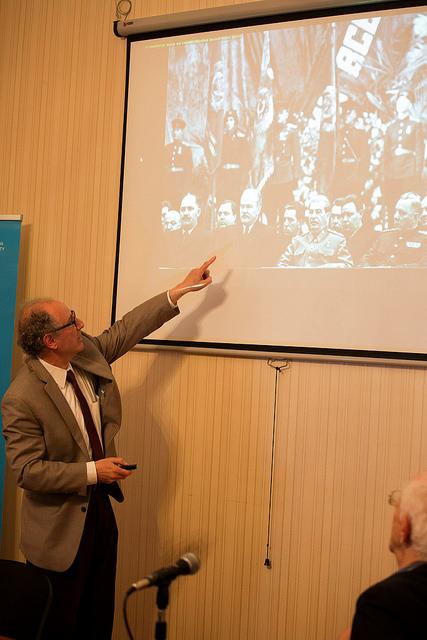 Rubenstein gave a tangible illustration of the process of “de-Stalinization” that started when he first collapsed. One of the cornerstones of this process was leadership’s treatment of the “doctors’ plot.” On January 13, 1953, newspapers announced the doctors’ plot, a conspiracy of mainly, but not exclusively, Jewish doctors to kill Soviet leadership. After Stalin’s death, the new leadership were quick to distance themselves from the investigation. Along with the fact that no Jewish doctors signed his death certificate, it was greatly emphasized in the Soviet press that Stalin died of natural causes. On April 4, Pravda newspaper called the doctors’ plot a sham, and on April 6 it went as far as announcing that the Soviet secret police had fabricated charges. This was “an unprecedented admission of regret by the regime,” Rubenstein said, and the Western press lauded these announcements as signs of the Soviet leadership’s break with Stalinism.

A 1947 photo of Stalin with the Politburo, the highest policy-making authority under the Communist Party of the Soviet Union, shows him with members of his inner circle, two of whom he ordered executed two years later. “Stalin retained the right to kill. His accomplices were all his potential victims,” Rubenstein explained.

The images of Stalin’s corpse highlight the position of Soviet leaders in the hierarchy right after his death. All the flowers in the USSR were requisitioned for his funeral, there were huge demonstrations all over the Eastern Bloc, and Khrushchev later admitted that hundreds died at the funeral, trampling each other. Covering the funeral, the majority of Western press romanticized Stalin’s figure, showcasing respect for the leader of the Red Army that defeated Nazi Germany. However, by March 20, 1953, Stalin’s name disappeared from the Soviet press. Leadership was no longer interested in Stalin and maintaining Stalinism, Rubenstein noted.

The West assumed Stalin’s death would lead to chaos that they could take advantage of. However, Soviet leadership was prepared - they knew that things could only change for the better, Rubenstein argued. They did not go so far as to denounce Stalin, however. It was only three years later, at the 20th Congress of the Communist Party of the Soviet Union in February 1956, that Krushchev gave a speech denouncing Stalinism.