In a public lecture delivered at CEU on June 7, organized and hosted by the Center for Media, Data and Society at the School of Public Policy, David Kaye, the Special Rapporteur on the promotion and protection of the right to freedom of opinion and expression, warned that the world is witnessing “the greatest multi-front assault on freedom of expression since Mikhail Gorbachev introduced glasnost in the 1980s and rolled back censorship in the Soviet Union more than thirty years ago.” This assault, Kaye argued, is caused by a range of factors encompassing “authoritarianism, dogmatic militant religious belief, terrorism and counter-extremism, online misogyny and propaganda, oligarchy and corruption, legal regulation and extra-legal intimidation, the desire for power and control of information.” It is felt by a diversity of individuals – “journalists, artists, filmmakers, writers, regular citizens” – who face “threats, harassment, imprisonment, torture and even murder” simply for exercising their rights. 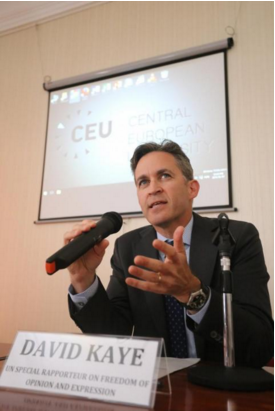 Kaye identified four serious and specific threats which call for closer attention: the “basic oppression of members of vulnerable communities” through killing, arrest, surveillance and prosecution, including under defamation and blasphemy laws; “threats to free and independent media,” including the targeting of journalistic sources and whistleblowers; “growing censorship on the Internet” through “increasingly sophisticated and pervasive” methods of “filtering, throttling and even shutting down,” “mass surveillance” and the undermining of tools for encryption and anonymity; and the “increasing use of national security and public order,” as well as “the fight against extremism” as justifications to restrict expression.

Recognizing that freedom of expression “is essential to democratic governance and accountability,” but “individual self-development” is also crucial for constructing effective responses to various threats facing this right, Kaye indicated. Recalling the scope of states’ obligations under Article 19 of the Universal Declaration of Human Rightsand the International Covenant on Civil and Political Rights, he argued that “each element of Article 19” should be understood “in the context of individual lived experience” in order to “revive the global commitment to the ideas behind Article 19.” “Let’s make it personal”, Kaye suggested. “Article 19 is not meant merely to protect that particular person’s right to impart information…[it] is also about protecting everyone’s right to seek and receive information so that we can be full participants in the life of our communities and fully developed as human beings,” he insisted.

At the same time, Kaye highlighted the value of “tools of law and public advocacy,” including before national courts, regional human rights courts and bodies, and UN human rights bodies, in fighting the particular challenges to freedom of expression. He concluded on a positive and galvanizing note. “This is a long-term and persistent battle for a fundamental freedom, and I’m confident that if we use the tools provided by law, the institutions and legal texts, freedom of expression will win out,” he said.

David Kaye is Professor of Law at the University of California, Irvine, School of Law, and was appointed to the position of Special Rapporteur on the promotion and protection of the right to freedom of opinion and expression in August 2014. Under Human Rights Council resolution 7/36, the Special Rapporteur is mandated to, among other things, “gather all relevant information, wherever it may occur, relating to violations of the right to freedom of opinion and expression,” to "seek, receive and respond to credible and reliable information from Governments, NGOs and any other parties” in this regard, and to “make recommendations and provide suggestions on ways and means to better promote and protect the right.” 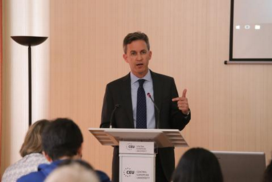 In her opening remarks, Sejal Parmar, Assistant Professor in the Department of Legal Studies and core faculty at the Center for Media, Data and Society, reflected upon the connection between CEU and the Special Rapporteur’s mandate. “The mandate necessarily deals with some of the most difficult and divisive human rights challenges that perplex our world…issues that we discuss in our classes and courses, confront through our engagement in projects and debate at the level of the university,” she said. “CEU is an institution whose uniqueness rests in its dedication to socially and morally responsible intellectual inquiry, its Open Society mission and commitment to building democratic societies that respect human rights – all of which depend on the effective exercise of freedom of opinion and expression.”