“Identity and regional cooperation are very important for this region, especially when it comes to the existence or development of a European identity, CEU’s President and Rector John Shattuck said in his opening remarks. Shattuck was Assistant Secretary of State for Democracy, Human Rights and Labor deployed to the Western Balkans when the Dayton Peace Agreement was signed and then implemented.

Internal and external image of the Western Balkans is one of the most important topics for the region, said Peter Balazs, director of CENS, who chaired the first panel. 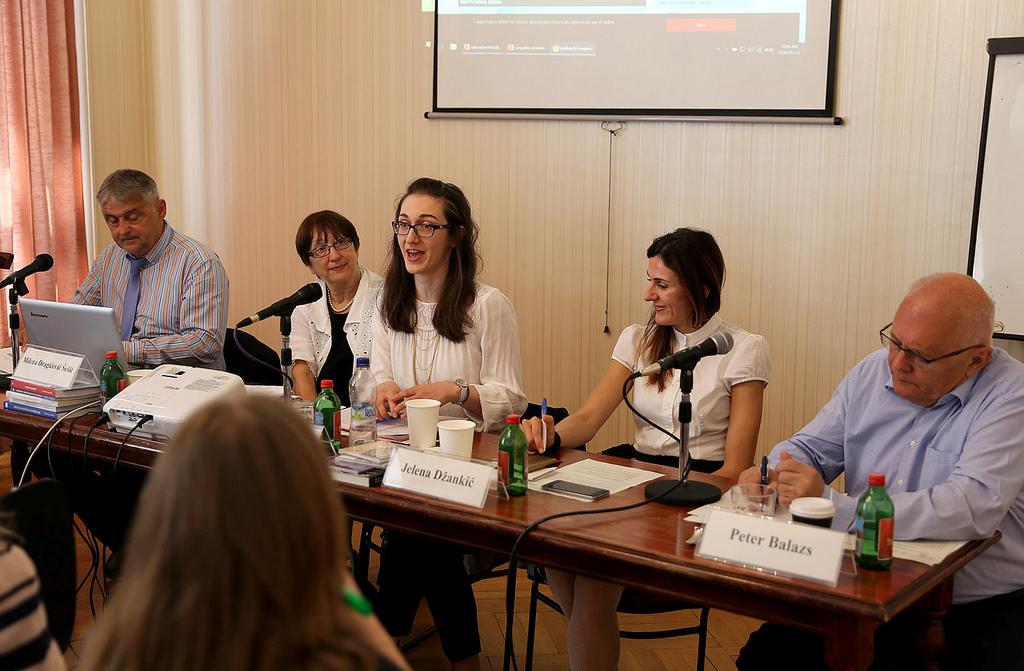 The first panel of the Regional Cooperation and Regional Identity in the Western Balkans conference examines the issues of image construction and belonging in the region. Photo: CEU

Jelena Dzankic, research fellow at the European University Institute in Florence, addressed the issue of regional versus state identity in the region, which is shaped by its mixture of cultures, its economic transition and was the forum of EU and NATO cooperation. The strategy of symbolic state building created a contestation between groups in the region and the setting of group boundaries established the concept of ‘the other’, she said. External contestation becomes defensive and, as a result, the countries are backsliding in terms of democracy, Dzankic concluded.

Andelko Milardovic, professor and senior research scientist at the Institute for Migration and Ethnic Studies and president of the Institute for European Studies and Globalization in Zagreb, focused on the value of culture and image of the region. The Western Balkans is a product of social constructions, he said, and the image of the region is a negative stereotype, defined as a place of conflict and trouble. This image might change due to the transformation of the countries in the region and the role of Croatia within the EU, he concluded.

Creating a region depends on external and internal drivers, said Cvete Koneska, senior Europe analyst for Control Risks Group in London. Regional interaction, a precondition for EU membership, is based on the functional approach and the issues of interdependence of the region, she noted. Although the EU urges the Western Balkan states to adopt a European identity, the countries seem to be less European when compared to EU member states. Even though this process achieves the opposite of what had been intended, it can still create a community of solidarity, Koneska added.

Milena Dragicevic Sesic, professor of Cultural Policy, Cultural Management, Cultural and Media studies at the University of Arts in Belgrade, analyzed the role of contemporary cultural production, heritage interpretation and artistic expressions in the recent national identity constructions and representations in the countries in the Western Balkans. “The politics of oblivion and how it is dealt with in arts address the legacies of the conflict, the victims or perpetrator and the issue of ‘othering’ are part of the cultural production,” she noted. 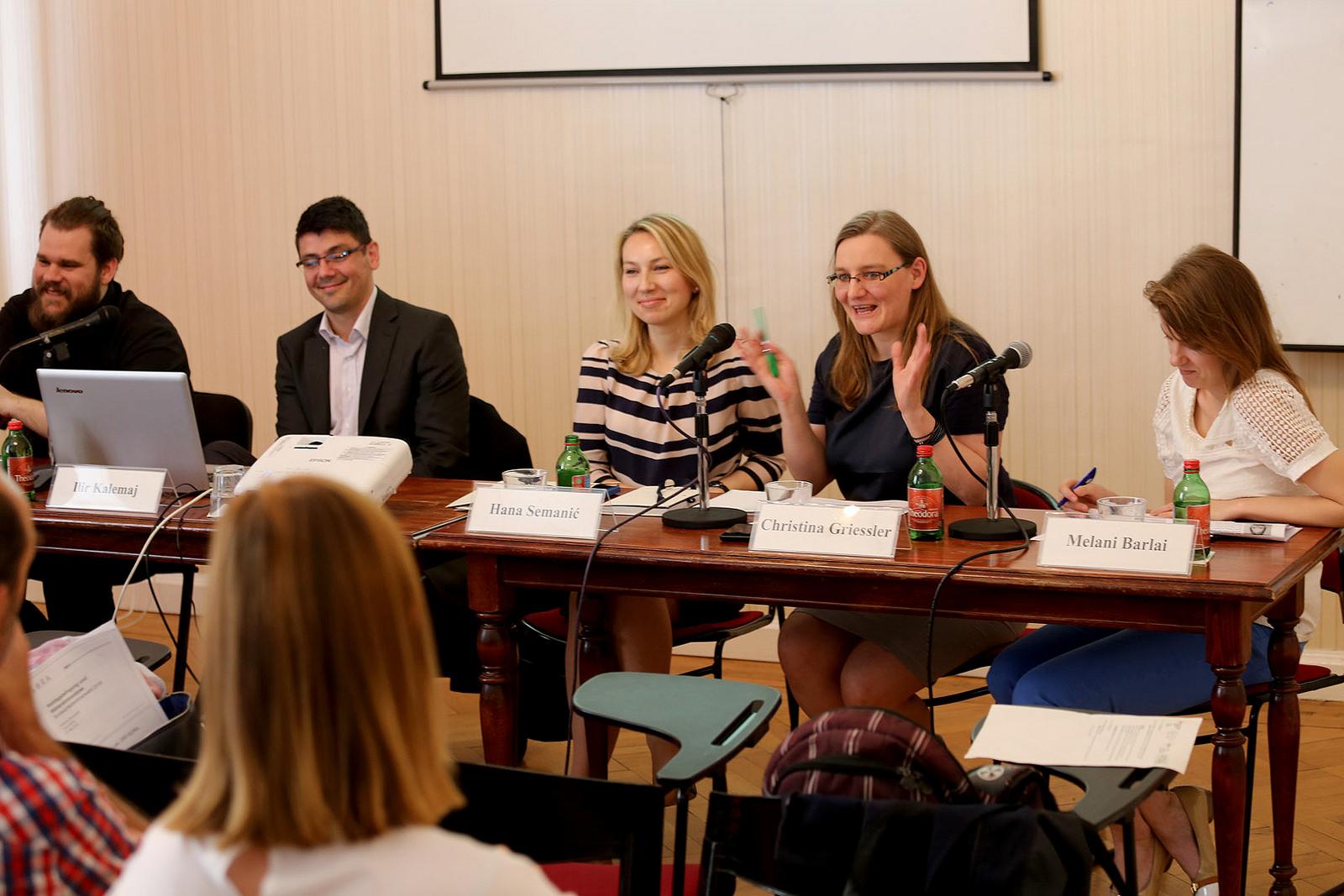 Second panel, “Self-assessment about where the Western Balkans belongs: Case studies,” focused on specific events in the region which shape regional and national identities. Photo: CEU

Ilir Kalemaj, assistant professor of International Relations, Political Science and European Studies at the University of New York in Tirana, discussed the case of Albania “in the crossroads of regionalization and European integration.” The rule of transitocracy, moving neither forward nor backward on democratic consolidation, prevents the Western Balkans countries from becoming consolidated democracies, he said.

Christina Griessler, research fellow for netPOL (Network for Political Communication) at Andrassy University discussed the power of identity in conflicts through historical case studies. While competition, or a conflict of interest within a group can be negotiated and reach a compromise, confrontation and counteraction (us vs them) can lead to the devaluation of the other, justified discrimination, and genocide, Griessler argued. Regional cooperation is crucial for creating stability in the region, in helping overcome nationalism and promoting understanding and recognizing different identities, she added.

Anastas Vangeli, researcher at the Graduate School for Social Research at the Polish Academy of Sciences and CEU alumnus (NATI ‘09) gave a presentation on how anti-government protest #protestiram affects political identification in Macedonia. The rhetoric of the movement is beyond ethnic; Albanian and Macedonian flags appeared together for the first time at the protest on May 5, 2015, he said. The key faces of the movement are women, due to their number and importance, #protestiram is often referred to as “women’s revolution,” he added.

“There is no common identity in the country, let alone in the region,” said Hana Semanic, research fellow at the Center for European Neighborhood Studies (CENS) at CEU, discussing the education system in Bosnia and Herzegovina (BiH). The current education system, an aftermath of the Dayton Peace Agreement, is not horizontal, it doesn’t offer a standard, unified curriculum, it presents only one culture without tackling the multicultural society, and it does not promote a united Bosnia and Herzegovina.

Real progress in regional cooperation is not likely, Adela Danaj, master’s student in the Department of Political Science at CEU, summed up the presentations. In his closing remarks, Kalemaj called simultaneous integration negotiations with the EU and the region. A regional cooperation makes economical sense for the EU, Griessler noted, and the region has to learn to work together towards EU integration. “To create a more welcoming environment, the political framework needs urgent rendition,” Semanic added.