Nearly 700 students from 81 countries received master's and doctoral degrees and program certificates at CEU's graduation ceremony on June 25. The University's 25th commencement ceremony was also the last for CEU President and Rector John Shattuck, who is stepping down this summer after seven years of distinguished service. In addition to the conferral of master's and doctoral degrees, six honorary degrees were granted as part of the 25th anniversary celebrations and CEU's Founder and Honorary Chairman George Soros gave remarks on the University's first quarter-century. The CEU Open Society Prize was presented to Medecins Sans Frontieres in recognition of the courageous humanitarian leadership the organization has shown throughout the world. CEU Provost and Pro-Rector Liviu Matei presided over the ceremony at the Budapest Palace of Arts. 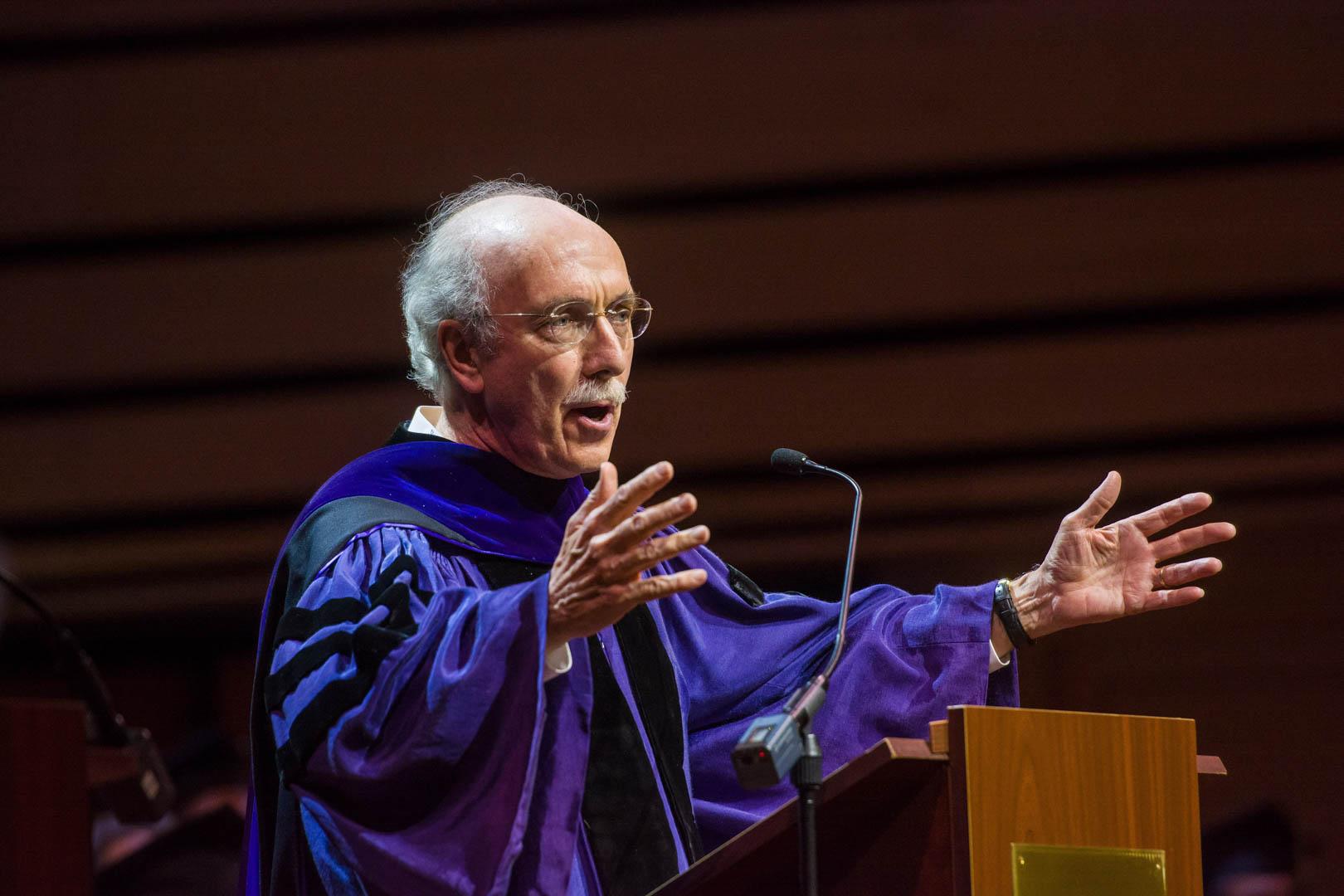 “You’ve shown that you’re committed to open society values – you responded last fall to the refugee crisis, by volunteering at the Keleti train station in Budapest and in many other places, and by helping humanitarian organizations like Medecins sans Frontieres – whom we honor with this year’s Open Society Prize,” Shattuck said of the 2016 graduates. “You’ve shown what makes CEU the most diverse international university in the world, a place that celebrates your many nations and cultures, in contrast to the corrosive nationalism of our time. The degrees you have earned are in many fields, but all are based on the same five principles: freedom of thought; the pursuit of truth; an honest relationship with history; respect for the dignity of individuals and groups; and the rule of law. A quarter-century ago CEU was founded on these principles.”

Chairman of the CEU Board of Trustees Leon Botstein thanked Shattuck for his leadership and praised him for his diplomacy and productive time at the University. To thank Shattuck, an avid biker, for his service, the University gifted him a new bike at the graduation ceremony. SPP graduate Nilofer Khan Habibullah presented Shattuck with the bike on stage. 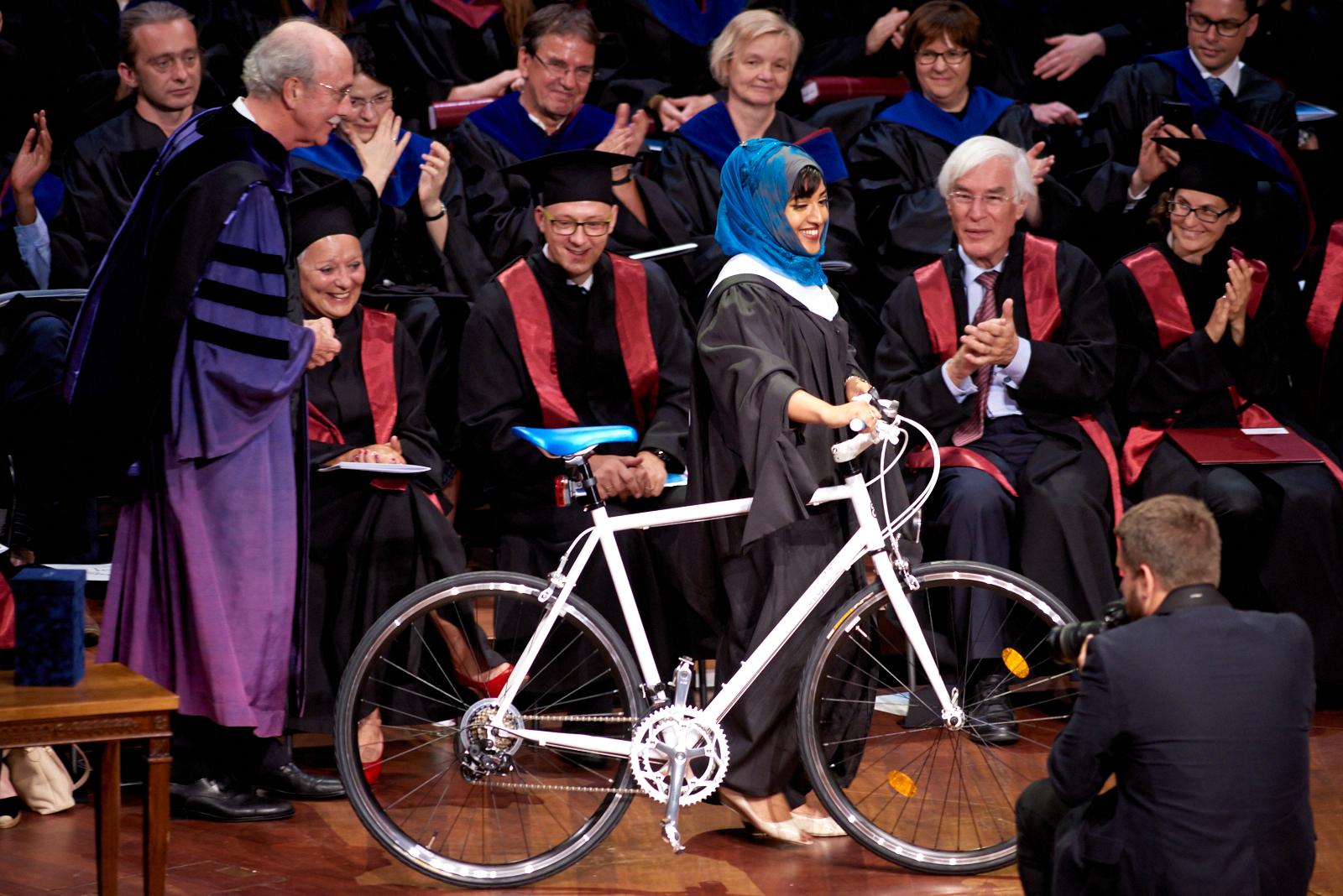 CEU School of Public Policy graduate Nilofer Khan Habibullah presents CEU President and Rector John Shattuck with a new bike to thank him for his seven years of service to the University. Image credit: CEU/Daniel Vegel

Botstein then focused on the students, whom he sees as a bright light in today's world.

“You are to be congratulated for the civility and sense of community you have created,” he said. “A university is known by its students and one of the most optimistic aspects of CEU is the variety of countries you come from – that you get along and also quarrel in a civilized manner. The traditions of the university are a glimmer of hope in the future of civility, peace and justice.” 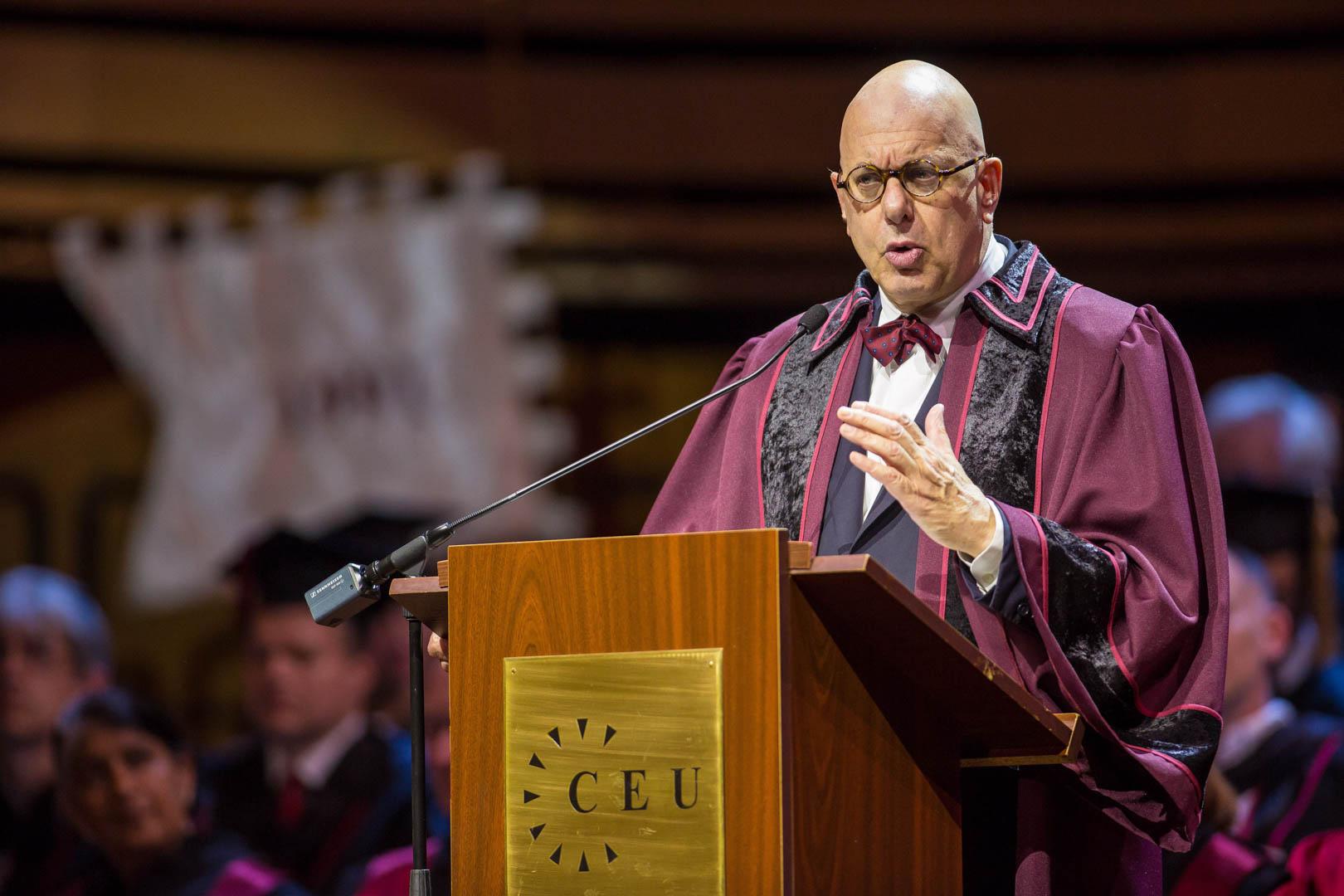 Chairman of the CEU Board of Trustees Leon Botstein speaks at the 2016 graduation ceremony. Image credit: CEU/Andras Nemeth and Andras Farkas

Matei noted that, at 25, the University is still young but already mature as an institution and named CEU's diversity as one of its most important strengths.

“Today is a special moment for all of us. We celebrate continuity and stability as our University is turning 25. CEU continues to pursue its original founding vision, which is to study and promote open society through high-level research, research-based teaching, and civic commitment,” he said. “The graduating class of 2016 is a good illustration of one of CEU’s most distinguishing characteristics. CEU is one of very few universities in the world that are international by design; it is possibly the most internationally dense.”

Before the conferring of degrees, both the alumni speaker and student speaker addressed the graduates on behalf of their respective cohorts. One of nearly 14,000 CEU alumni, Member of European Parliament Monica Macovei recalled how rigorous and difficult her first few months at CEU were but illustrated how persistence and dedication pay off. 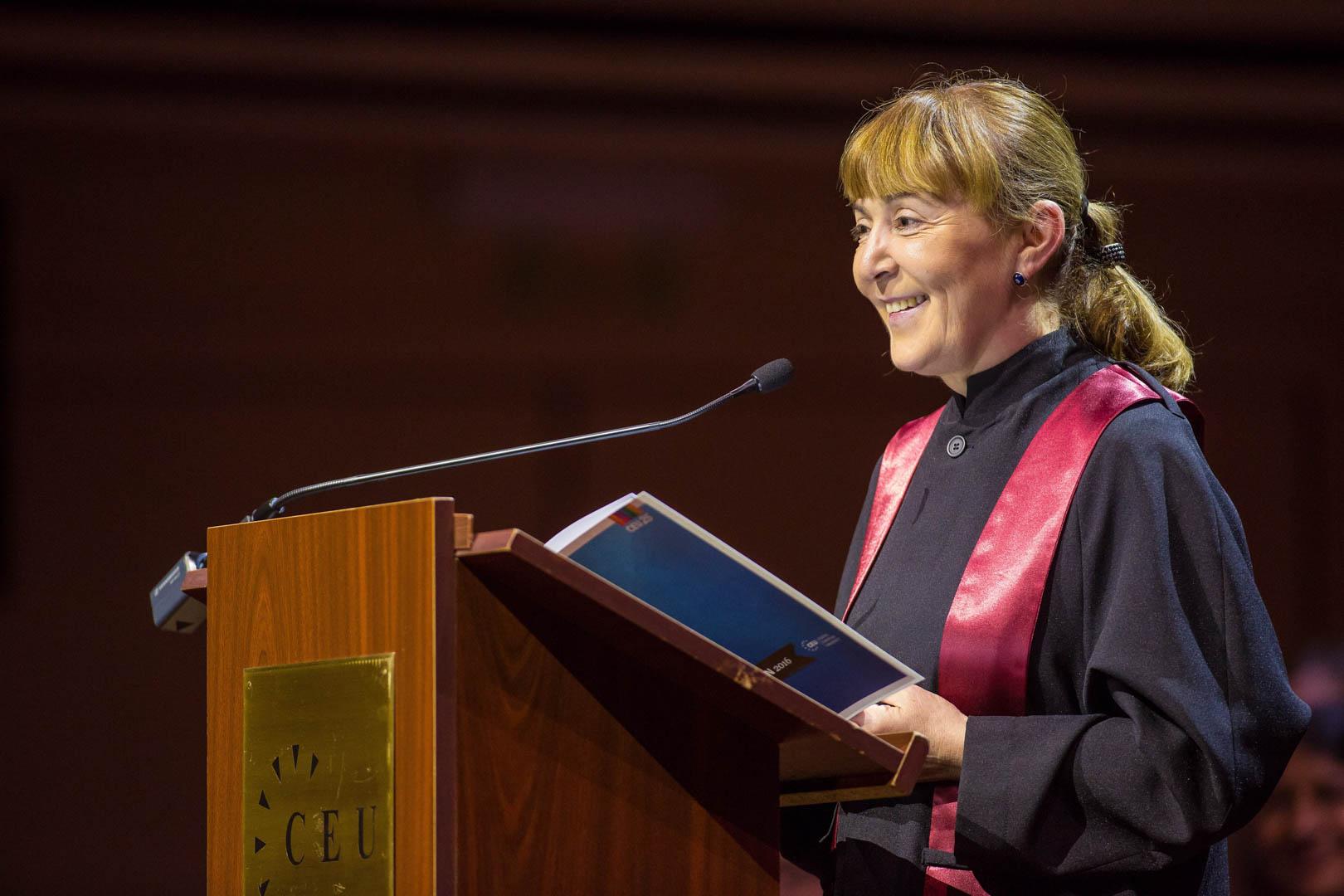 “I wanted to go home – it was too hard – but I didn't leave. It changed my life; CEU changed my life,” the Legal Studies alumna said. “That's what I want for you: to be the agents of change with the power of knowledge you received at CEU. The world is changing and now it seems it's changing for the worst and it's your role to change it for the better. From our history you can see that one single person can change the world – it's the one person who dares. In the 1990s, after communism, George Soros knew what we needed in this region: education and civil society. He knew exactly where to invest his money and, by doing this, he helped change the world. You don't need to be many – any of you can start to change the world.”

Natalia Peral, CEU's first PhD graduate with a latino heritage spoke about her background and the unlikelihood that she would have ever been able to pursue graduate studies without an institution like CEU. Peral, a native of Argentina and a graduate of CEU's Doctoral School of Political Science, Public Policy and International Relations, noted that a CEU education “goes beyond the academic,” and she urged graduates to use their education to empower underprivileged people.

“I stand here today in front of you as the first person in my family to reach graduate studies. I am part of a working family from the always unpredictable Argentina,” she said. “I am an unlikely PhD student and the journey was not easy. I come from a society where few reach bachelor studies. By embracing diversity, CEU gives opportunity to people who couldn't dream of education.” 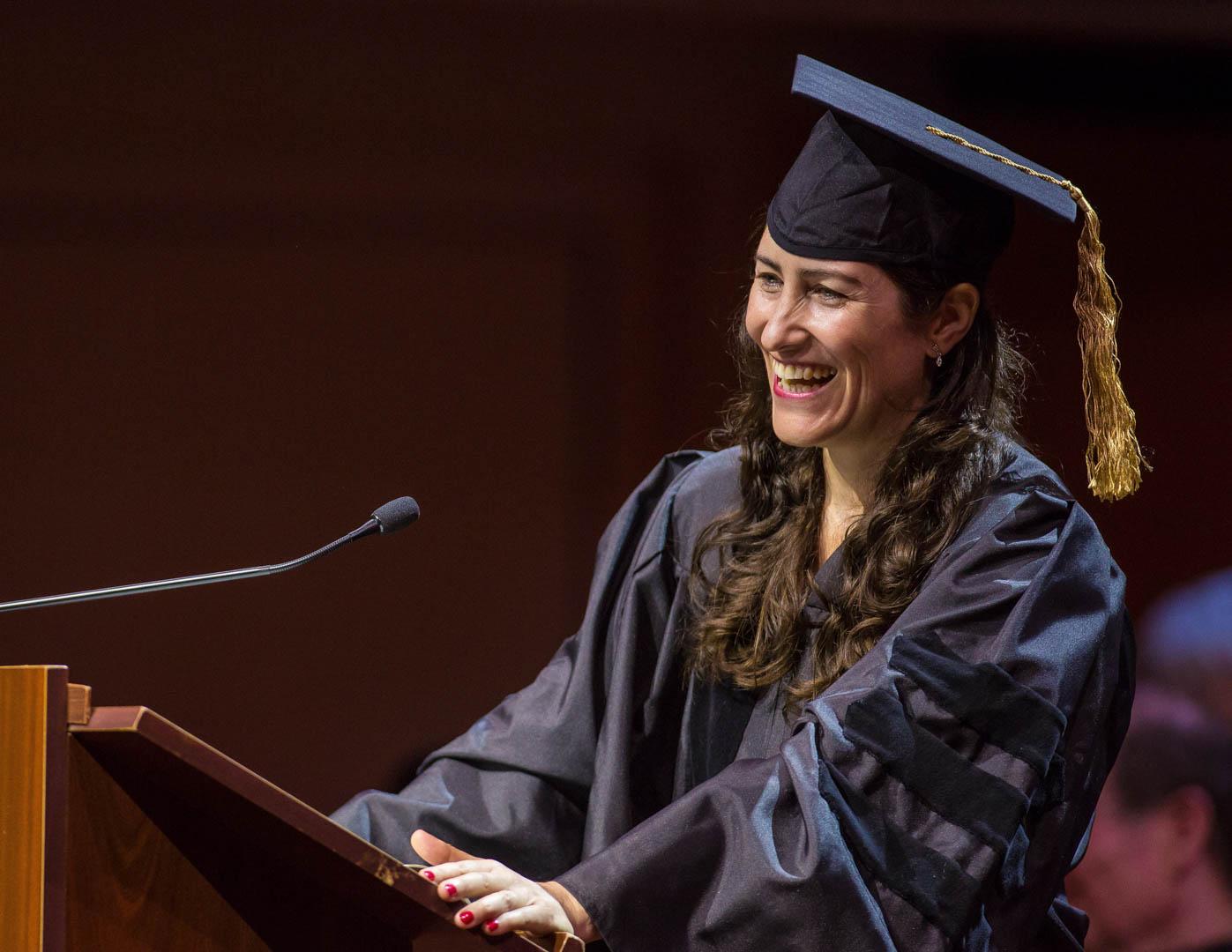 After the conferring of degrees, Shattuck presented this year's Open Society Prize to Medecins Sans Frontieres (Doctors Without Borders) - an organization that CEU's Matei said is needed today more than ever. Since 1999, CEU has honored an individual or organization annually in recognition of their contributions to the creation of an open society. Present in nearly 70 countries, MSF's work was especially crucial during the 2014 ebola outbreak and remains a lifeline during the ongoing refugee crisis. MSF representatives Sylvia Wamser, a clinical psychologist and psychotherapist, and Lajos Jecs, a nurse, have both completed many field missions and they jointly accepted the award on behalf of the organization. 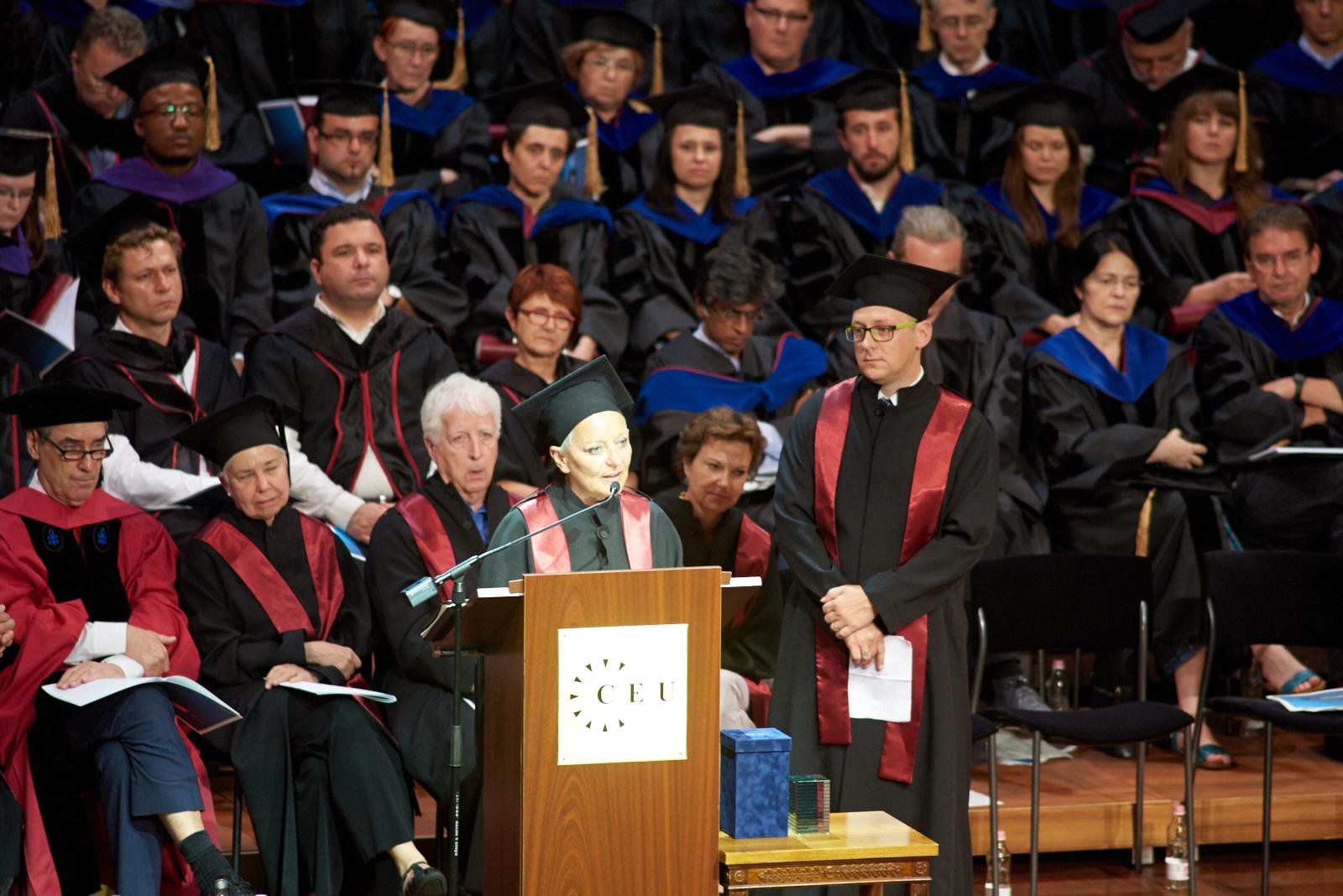 Speaking of the October 2015 airstrikes on the MSF hospital in Kunduz, Afghanistan, Wamser, who provided psychological support to survivors said, “I've seen the impact it can have on a population when their hospital is being bombed. Not only are they lacking medical care, they've lost their trust. They no longer believe a hospital is a safe place. For us, this is not acceptable.”

Jecs, who just completed a mission in Greece, said that the clearing of the Idomeni camp in Greece and related European policies are attempts to hide the problem. “Thousands of desperate men, women, children were stuck there after Europe chose to close its back on them. Now Idomeni is empty, but people are still coming. MSF will not stop assisting these people and speaking out on their behalf.”

Following the awarding of the Open Society Prize, Soros addressed the graduates and spoke about the University's 25th anniversary. Calling CEU one of his proudest achievements, he noted it is significantly different than he had envisioned it initially and said that that fits into the University's critical thinking framework.

“Looking back, it gives me great pleasure to see how CEU has developed over these years. I've been fortunate to be able to attend almost every commencement and meeting the students is one of the most rewarding parts of my involvement at CEU. I congratulate all of you and I hope you will return to your home country or to wherever your career takes you and that you will take the spirit of CEU with you.”

After praising Shattuck for his years of service, calling him “the right man at the right time,” Soros added that he is pleased with the choice of Professor Michael Ignatieff as Shattuck's successor. “I am very pleased that the University has recruited an outstanding public intellectual to take over from John [Shattuck]. The University will enter an exciting new phase of development and it will seek to become the prototype of a university appropriate for the 21st century. Our 25th anniversary happens to take place on the weekend of Brexit. This is a tragedy both for the EU and the world at large – they will need CEU more than ever.”