As part of its 25th anniversary celebrations, the CEU community gathered to reflect on the University's founding vision with a discussion with Founder and Honorary Chairman George Soros on June 24, 2016. CEU was founded in 1991 as a place where scholars can speak openly, enquire deeply and take intellectual risks, as a university dedicated to the principles of open society.

While the democratic transition in Central and Eastern Europe has not been a steady path, and challenges to democracy and open society abound in the world today, CEU has fulfilled that vision. With students and faculty from over 100 countries, and 13,000 alumni in 130 countries, CEU is a global community grounded in a firm belief in the role for open and democratic societies that respect human rights and human dignity.

"Our university has never been more important than it is today, given the circumstances we find ourselves in and our commitment to open society," said President and Rector John Shattuck in his opening remarks. When CEU was founded, "open society seemed like a road we would follow. George Soros knew that that wasn't necessarily going to be the case. He took Karl Popper's open society concept as a strong antidote to totalitarianism from both left and right and an important symbol of challenge to fascism and communism, and took this concept much further." 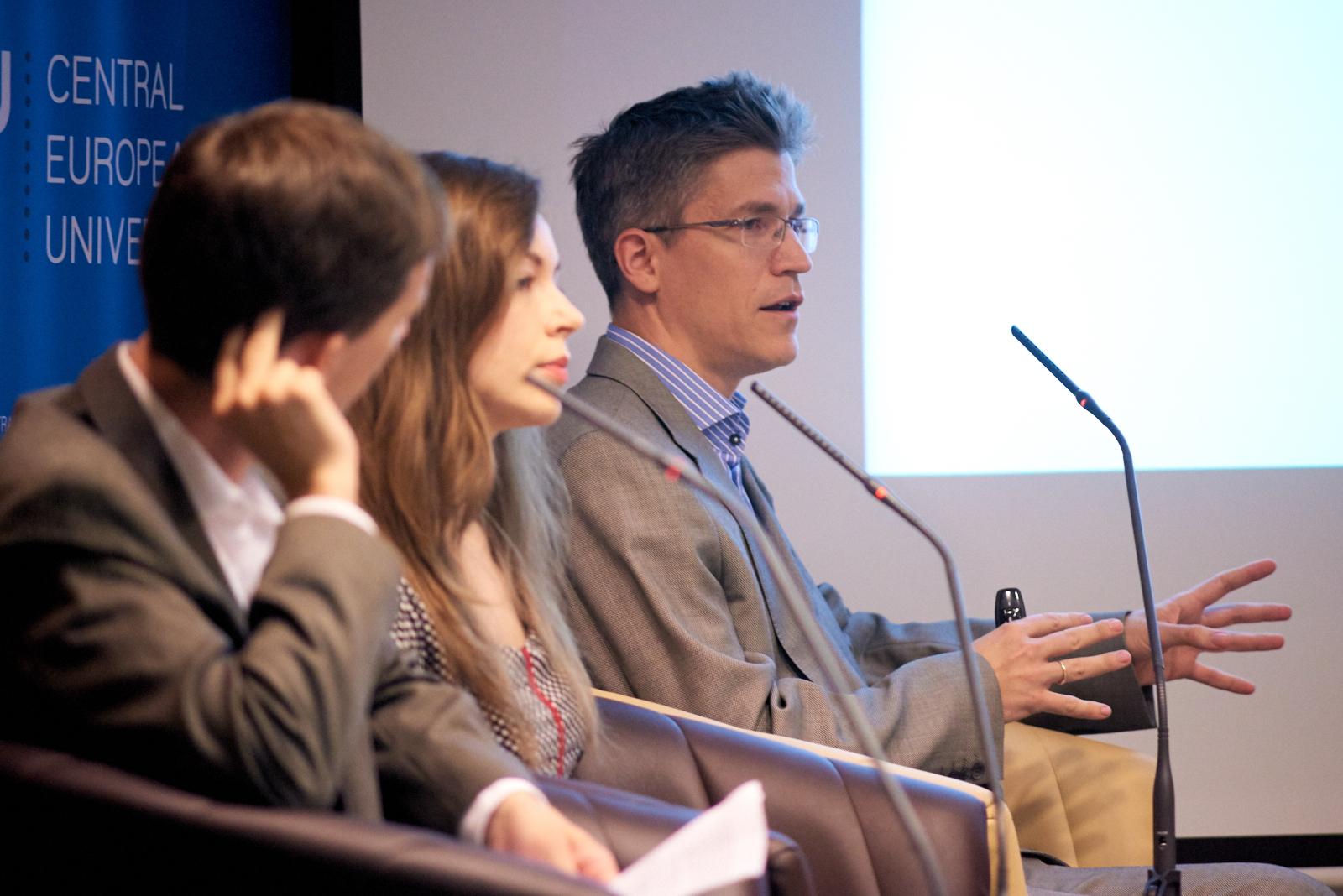 Panelist Miklos Koren, associate professor and head-elect of the Department of Economics, who holds degrees from Corvinus University, CEU, and Harvard University, outlined CEU's mission in the digital age. He recommended CEU focus on teaching digital skills and social responsibility, researching digital rights and inequality, and directing its civic engagement activities toward transparency in policymaking and helping journalists use databases and other new tools. He also mentioned CEU's interdisciplinary approach as particularly useful in today's world.

"CEU is a great place to be ... our graduates are going to be socially responsible decisionmakers and that's important, given these challenges," Koren said.

Doctoral student Adrienn Nyircsak spoke next about CEU as a self-reflective university. She plans to write her dissertation on reflexivity - a concept developed by Soros - as a tool in higher education policy. Nyircsak is a Yehuda Elkana Scholar pursuing her degree at the Doctoral School of Political Science, Public Policy, and International Relations.

"The founding vision gave me the academic and moral impetus to embark on a PhD," she siad. "I'm inspired by CEU's unique intellectual milieu and research that has a potential to impact public policy." 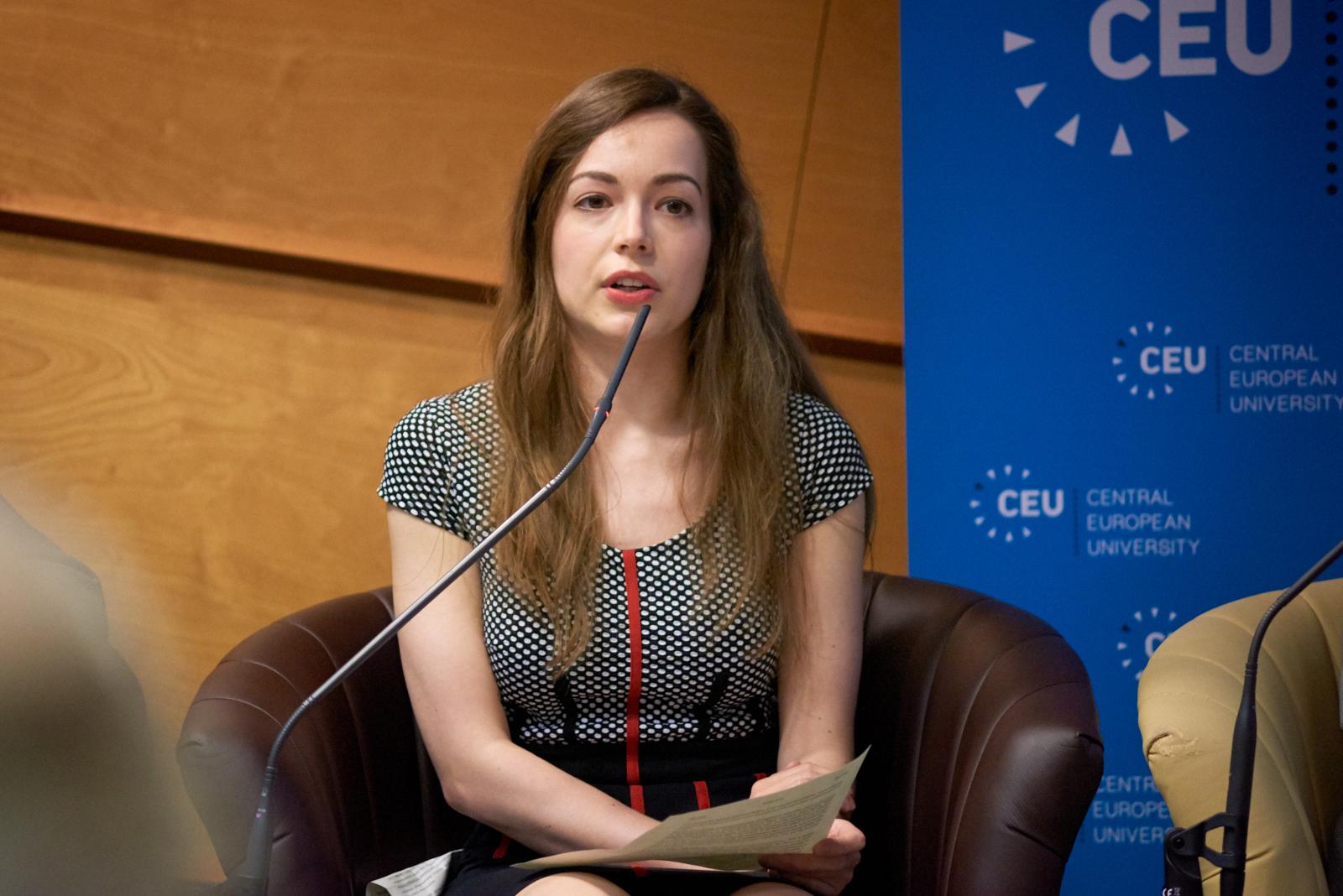 Simon Rippon, assistant professor with an unusual and interdisciplinary dual appointment in the Department of Philosophy as well as the School of Public Policy, said that at CEU, philosophy provides various frameworks and approaches to addressing real-world problems and policy issues.

"Universities are about academic freedom and critical thinking and therefore, open society, but at CEU it is explicit and therefore exciting," Rippon said. "Critical thinking is demanding. It also requires insight into how things are and why they are that way and a creative vision about how things might be otherwise. The biggest threat is not to becoming a closed society but a complacent society that doesn't understand why we have the values we do but treats them as dead dogma.... Philosophy has a role in the real world, breathing life into the "dead dogma" of liberal democracy."

Professor Judit Sandor, who not only teaches in the Departments of Political Science, Gender Studies, and Legal Studies but also directs the Center for Ethics in Law and Biomedicine (CELAB), said that CEU has provided the opportunity for open and interdisciplinary approaches to problem-solving that are essential to the challenges of our time.

"I am convinced that in the 21st century, knowledge shall be produced in an open, flexible, and multi-, inter- and cross-disciplinary context, if we want to gain new insights into the complexities of our social life today," she said.

CEU has evolved with the times, moving away from any naive view that the transition to an open society would be smooth or permanent, remaining relevant for its unwavering commitment to that openness, said Sandor, who has been at CEU for more than 20 years. 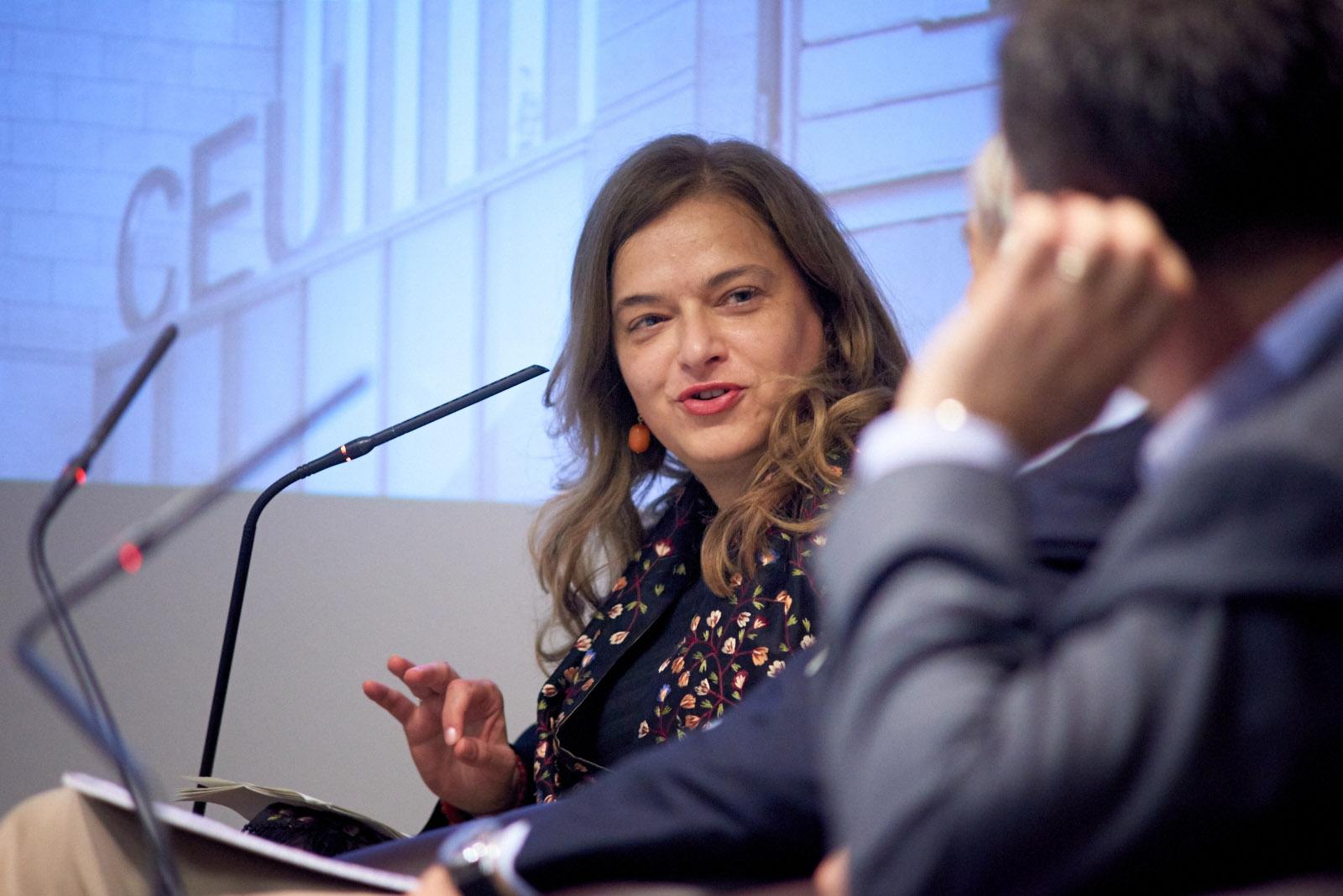 "Now we know that political transition to an open society is never a completed process,'' she said. "Moreover, social and economic transformations cannot be rapid and profound at the same time: they take time and do not necessarily unfold towards the desired direction."

A citation from Soros will be mounted on the wall of CEU's new building at Nador 15, Shattuck announced. 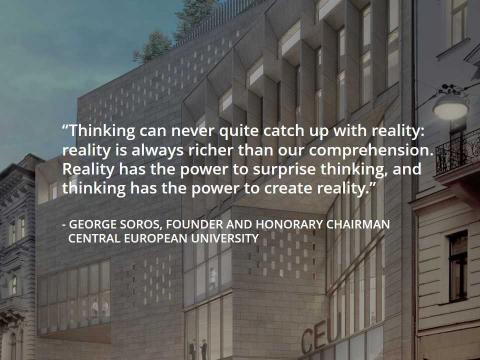 Quote from Founder and Honorary Chairman to be mounted in the new Nador 15 building.

Soros began by saying he found it "gratifying" to hear the commitment of faculty and students to the founding vision. Then he elaborated on the citation, to add an aspect of his fallibility principle:

Soros illustrated this with the example of the EU, which on the day the U.K. voted to exit the EU has been revealed as even more flawed than previously thought. The vision of the EU did not translate into reality because of the unintended consequences. 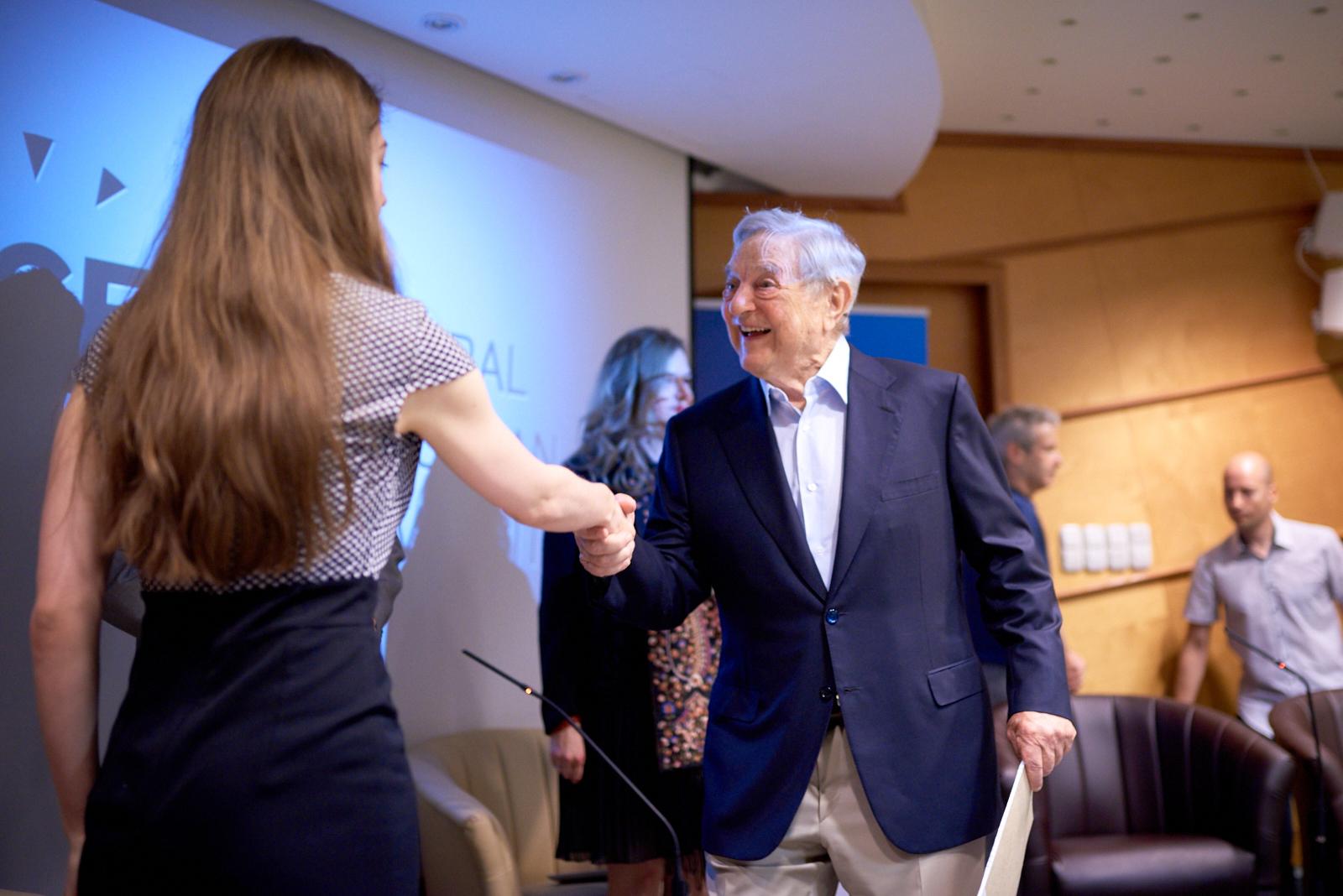 "The fact is, the European Union is broken - it needs fixing and preserving in order to be fundamentally rethought," he said. "There is a tremendous set of problems that confront us. That's how thinking has the capacity to create reality."

Provost and Pro-Rector Liviu Matei concluded the discussion with a statement about the future of CEU, speaking to Soros.

"Of all the institutions you have created, CEU is best placed to continue your intellectual legacy with effectiveness when it comes to the question of social science that can deal with all the issues of open society and democracy."