“It's hard to imagine a project that's more important to European politics than this one,” said CEU President and Rector Michael Ignatieff of CEU School of Public Policy Professor Martin Kahanec's new book “Labor Migration, EU Enlargement, and the Great Recession” at the launch on October 6.

Kahanec's co-editor Klaus F. Zimmermann and one of the contributors, Agnes Hars, joined the panel discussion, which was followed by a debate on various topics examined in the book.

Ignatieff continued his opening remarks by noting that free movement of labor is not just an economic issue, but a crucial element of the European vision itself. He said that universities should be the center of such debates and that, CEU in particular, with its world-class research and expertise in this field “aims to do this in Hungary, Europe and global policy debates.” 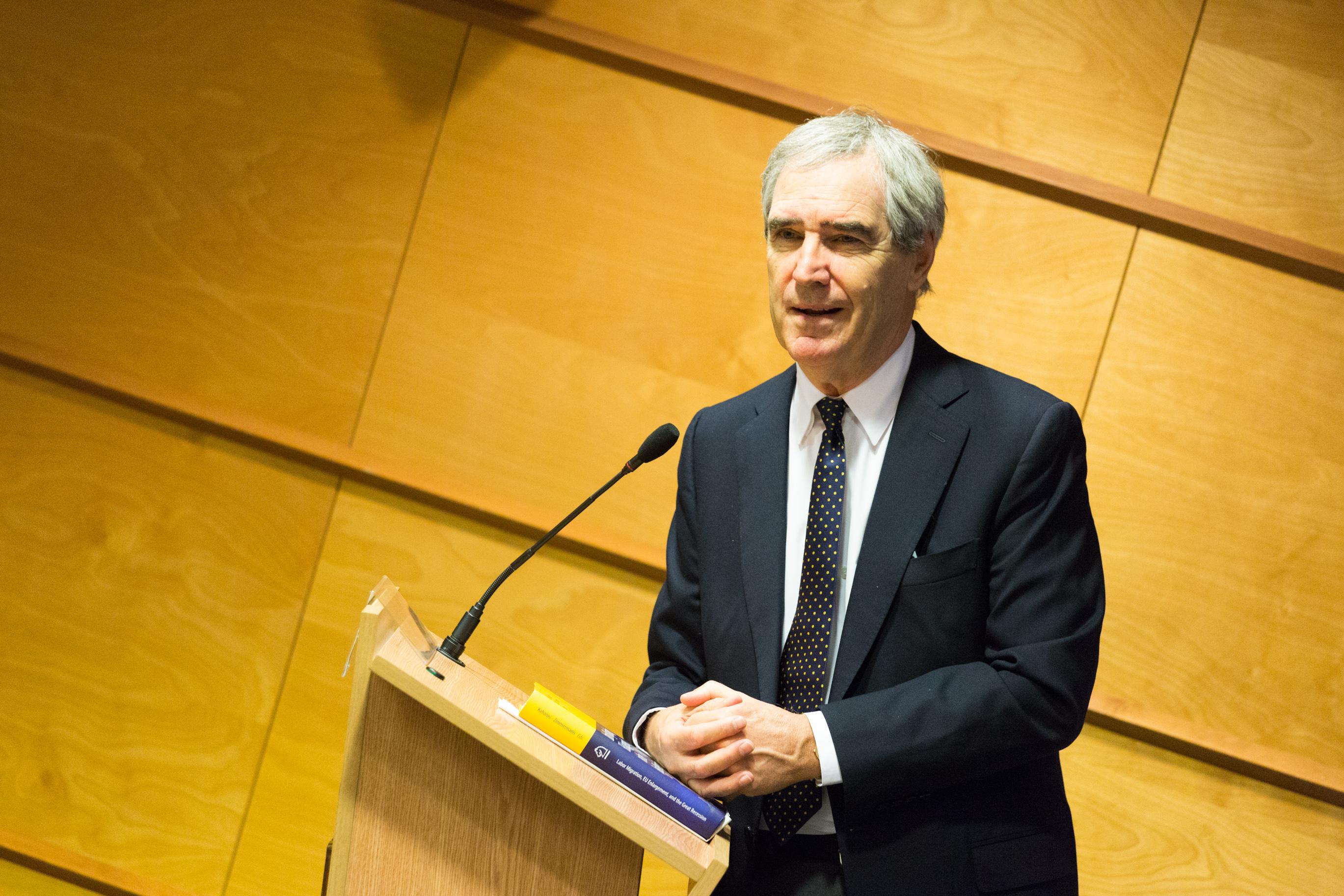 Introducing Kahanec, CEU Professor and Center for European Union Research (CEUR) Director Uwe Puetter noted that when Kahanec and Zimmermann began working on the book several years ago, their topic was kind of a novelty. “The irony is we are seeing backlash regarding this core principle of the Union: freedom of movement. Britain has been the most vocal critic but it has relevance for a number of countries.”

In the volume, Kahanec, Zimmermann and other contributors look at a number of research questions based on demographic facts that affect nearly all the EU member states including, aging populations, limited skilled workers, economic decline, unstable social security systems and negative attitudes toward workers from new EU members states or non-EU immigrants.

“Migrants are relatively well educated and they come to work,” Kahanec said. For most receiving countries, migrants have high participation rates, but they often have a hard time finding work and often end up in less skilled work than natives, he added. Not surprisingly, the researchers found that fewer migrants went to countries with high unemployment rates. “They go to countries where the jobs are,” Kahanec said. “Migrants did help Europe adjust and by moving, they also helped alleviate the east-west economic debt.”

In short, the free movement of labor promotes economic growth and advances competitiveness, Zimmermann said. He also noted that economic recession in the EU stimulated workers coming from the east; these workers do not tend to stay but some repeatedly migrate for work. He called this return, repeat circular migration “brain circulation,” rather than brain drain. “Most people who come leave again,” he said. “People talk about immigration, but not emigration. No country in the world absorbs everyone for good.”

Kahanec talked about their research on the impacts of migration on sending and receiving countries. “What we find is that migrants actually have neutral or even small positive effects on wages. As for welfare, people think that there's 'welfare shopping' going on, but there is no such systematic thing going on. Migrants bring skills and they are more likely to go to where these needs emerge – they are more fluid in this way.” 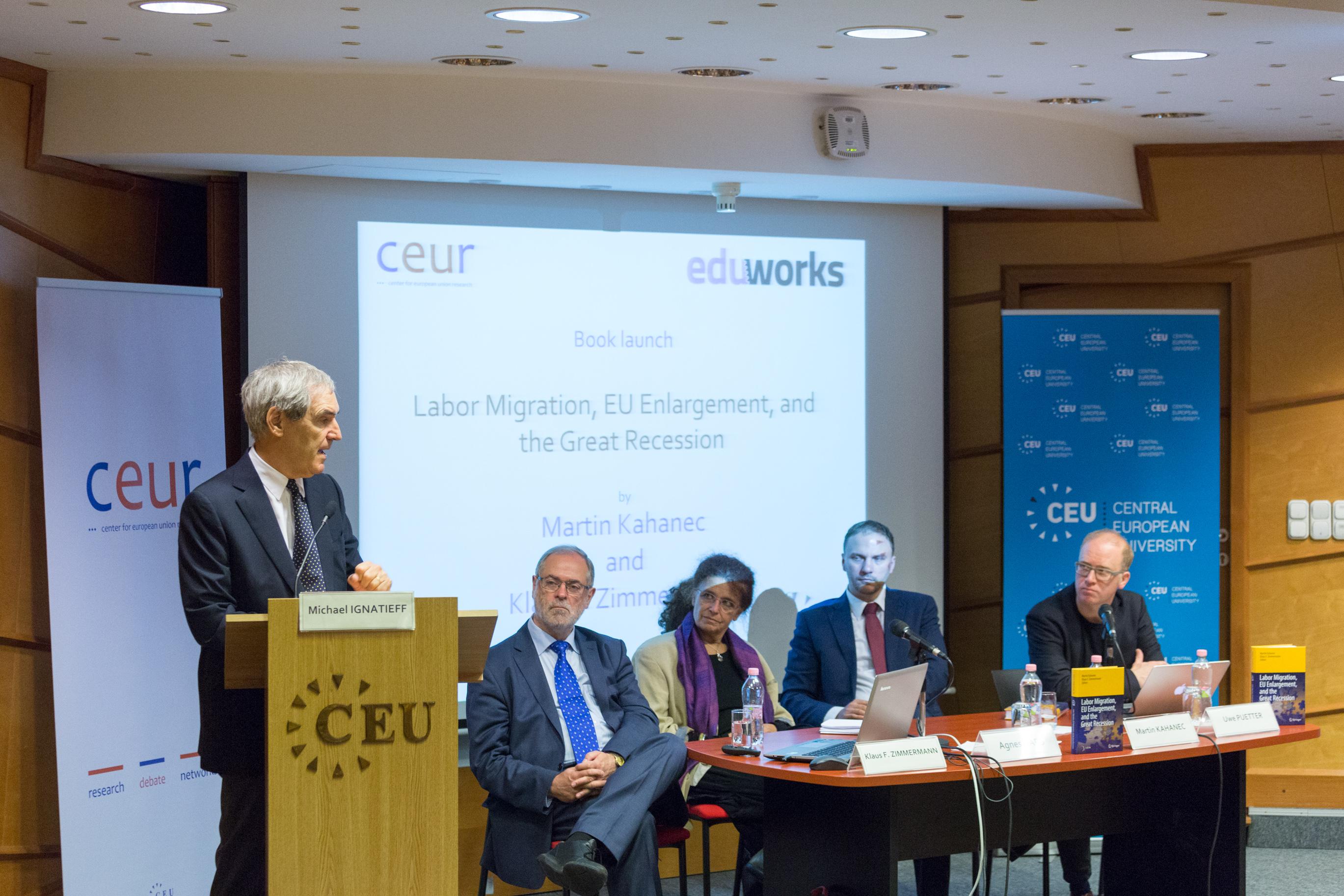 A panel of experts speak about migration, labor and the economy in Europe. Image credit: CEU

Zimmermann also noted that sending countries benefit from their citizens who are abroad but sending money back to their families at home. He explained that migrants who are employed in foreign countries allow for “occupational upgrading,” meaning when migrants are taking lower-level jobs, this allows natives to take higher-level jobs.

The refugee crisis challenge has changed the scene politically in Europe but, “[it] is not an economic issue,” Zimmermann said. “I think we have a policy crisis. Member states are no longer willing to carry this project. If the European project would collapse, it would hurt us all in the long run.” Contrary to the anti-refugee sentiment in many parts of Europe today, Zimmermann cited the example of China's active migration programs with Canada as a successful scheme.

Following the discussion about the book, a group of CEU professors and Zimmerman debated the economic, political and security issues related to labor mobility. CEU School of Public Policy Professor Nick Sitter, an expert on terrorism and anti-terrorism, spoke specifically about perceived and real threats of terrorism, emphasizing that modern terrorism has been affecting the world since the revolutions of the mid-1800s.

Sitter warned of the dangers of both linking migration with terrorism and, in reaction, acting on fear by working outside the rule of law. He noted that the vast majority of terrorists – for example, the perpetrators of the recent attacks in Paris and Brussels – are, in fact, not refugees but native-born.

“The danger we're seeing here is the danger of post-truth politics,” he said. “The [recent Hungarian] referendum propaganda was patently false. What we've seen clearly in Hungary – without any regard to facts – is that migration and terrorism are linked and this is designed to sell the illiberal democracy model.”

He also talked about Brexit and how migration keeps being put forth as something that trumps economy. “The unraveling of the single market is occurring because people put worries about intra-European migration above their concerns about the economy.”

CEU Professor and former Hungarian Minister of Finance Lajos Bokros picked up on Sitter's comments about post-truth politics. “We have to believe in a society in which arguments are based on facts. If we believe in the survival of democracy – which is not to be taken for granted – then we need to believe in the power of arguments based on fact,” he said. “We are not necessarily rational animals. We not only disregard the facts, but sometimes aren't even interested in getting to know the facts. If anyone follows the U.S. campaign for president, one can easily see that no matter what false information is disseminated, it sometimes sticks as if it were fact.”

Bokros emphasized the economic impact of the migration of Hungarian workers on national pension systems. “This is important. Roughly 200,000 people left and are working in the UK. These people no longer pay social security contributions in Hungary, so I will have a lower output as a pensioner,” he said. “The financial sustainability of the system is in jeopardy. Perhaps we need reform within the pension system. Us public policy wonks need to see these consequences and deal with them.” 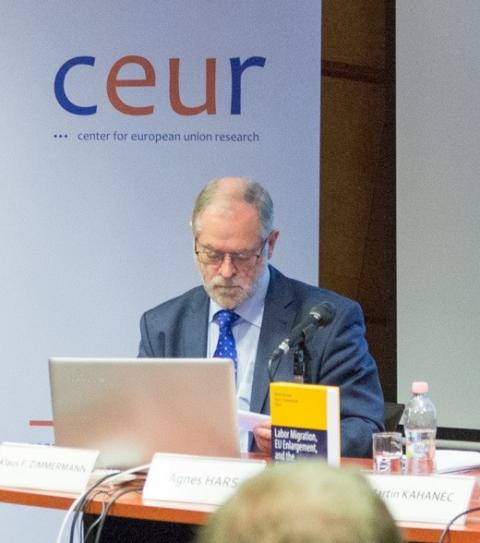 Kahanec added that the data they collected shows that there is a gap between public discourses and reality. “Migration strengthens the fabric of Europe. It creates and intensifies business and trade links,” he said. “Post-factual societies are dangerous because false discourse affects voter behavior.”

Zimmermann closed by emphasizing the policy challenge and noting that the issue of migration is not one that will go away. “The history of humankind is a history of migration.”

The book launch was sponsored by CEUR and Eduworks, a research and training network funded by the European Union's Marie Curie Initial Training Network program. Julius Horvath, CEU professor and acting dean of the CEU Business School, moderated the debate. For more information on the event and the book, click here.