Government rhetoric in several states along the so-called Balkan route that refugees follow into Europe has shifted to framing the migration as a threat to both security and national identities, according to participants in a roundtable discussion entitled "The Politics of Migration Across Europe; Domestic Politics and European Values," held October 10 by the CEU Center for European Neighborhood Studies (CENS), and the Friedrich Ebert Foundation. CENS Director Peter Balazs moderated the event, held in a new tiered classrom in CEU's new Nador utca 15 buildings.

"I'm struck by the trade-off that seems to be emerging," CEU President and Rector Michael Ignatieff said in his opening remarks. "Freedom for Europeans at the price of the human rights of refugees and migrants." 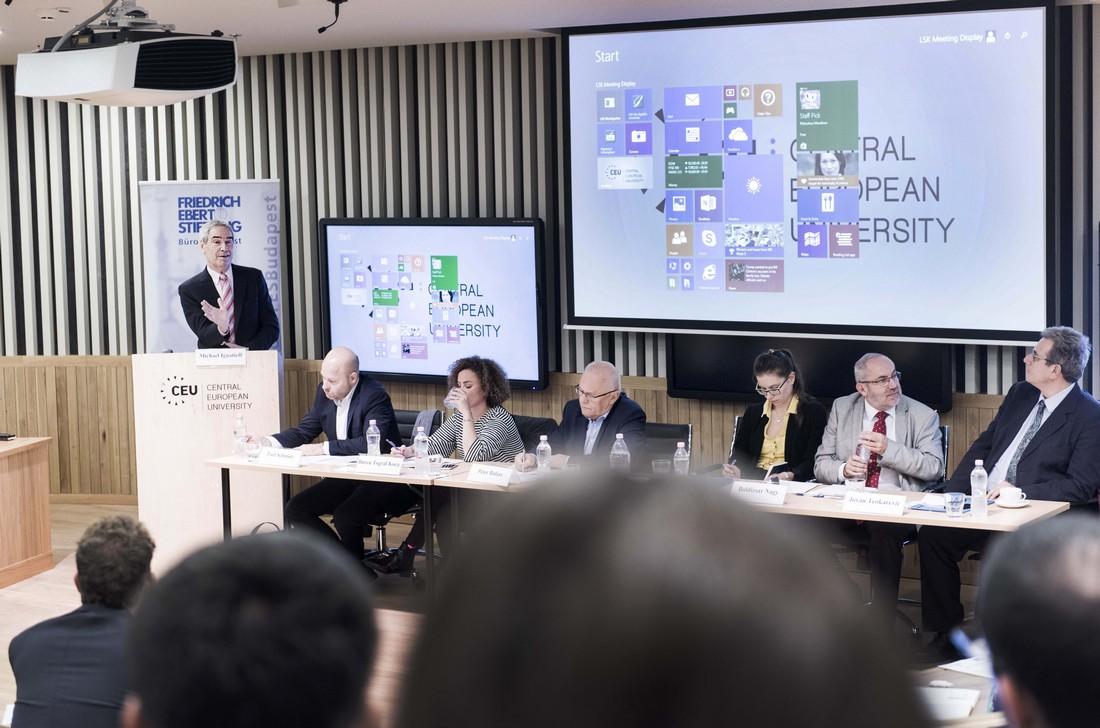 There are serious consequences of this choice that governments seem to be making, Ignatieff said. First, the stability of the Balkans depended on the expectation of eventual European Union membership – if EU member states are moving away from this promise, instability may ensue. Secondly, Turkey also counting on European assistance with the migration issue, and on visa-free travel to Europe, and failure on these points may lead to consolidation of the authoritarian regime in Turkey, he said.

Turkey indeed needs Europe's help to solve the migration issue, according to Burcu Togral Koca, assistant professor at Eskisehir Osmangazi University. Turkey does not have a structural asylum system, leaving Syrian refugees under a temporary protection regime. The discourse has shifted from a humanitarian approach to treating refugees as a terrorist threat, or a danger to culture or the welfare state. "In effect, Turkey is Europeanizing its migration regime," Koca warned.

In Serbia, one of the next major stops on the Balkan route, the government positioned itself as a friendly, humanitarianist country open to settling refugees, said Professor Jovan Teokarevic of the University of Belgrade. This was easy because refugees did not really want to stay, they paid their own way onward, and Serbia had experience with the acceptance of 840,000 refugees from Croatia and Kosovo after the conflict in the region, he said.

"With its welcoming behavior, Serbia used the crisis in a skillful and legitimate way to improve its extremely bad international image that it had had since the Yugoslav wars in the 1990s," Teokarevic said. 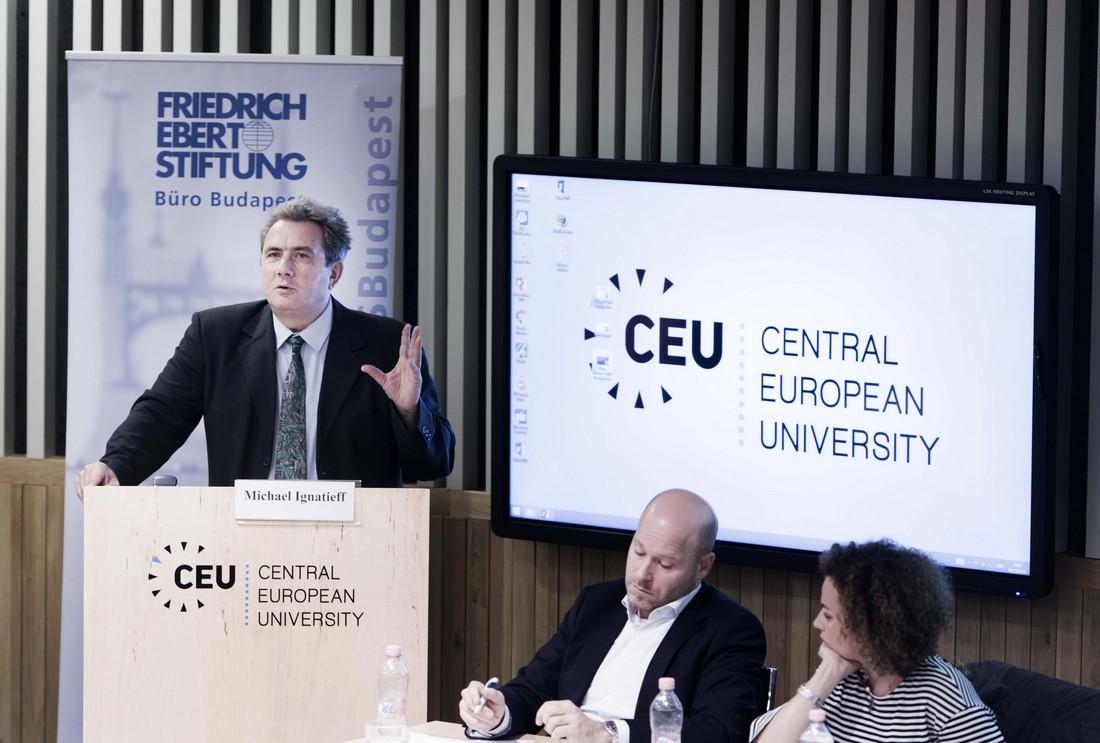 Now that borders with Hungary and Croatia are closed to migrants, the situation is different, he said. Seven thousand migrants are in the country, mostly from Afghanistan and Pakistan, who enjoy less support than those from Syria.

"Serbia awaits the European response," Teokarevic said. "There is a high economic price and insufficient EU funds (40 million euro). But the volume of the political price might be bigger as solidarity with migrants is likely to turn into hostility if they remain."

Hungary, once the next stop on the Balkan route, has built fences and systematically stirred up xenophobia in the leadup to a referendum on the quota of migrants to be settled in European Union countries. According to Boldizsár Nagy, associate professor at CEU and an expert in refugee law, Hungary denies that many migrants are truly refugees. It portrays them as threatening, physically obstructs entry with fences and unlawfully detaining them in a transit zone. It criminalized border crossings in a way that violates Article 31 of the Geneva Convention, punished citizens for transporting refugees to Austria even while providing buses for the same purpose, and advocates sending refugees back to Serbia, which by international law is not recognized as a safe third country and can therefore not accept them. The referendum itself was illegal, according to Nagy, breaching EU law because member states already agreed on the quota system and cannot go against such laws with a referendum.

In Slovakia, after a period of strong support for a humanitarian response, the tide quickly turned and the current government was reelected in part by portraying the migrants as a threat. Slovakia granted asylum to more refugees than even in its history, 158, but this was based on an initiative by the Catholic Church to accept Christians fleeing Iraq. The government has committed to 100 more spots, and offered 500 scholarships to Syrian refugees "as a face-saving move," but only 3 people have arrived of the 100, and only 33 students have accepted scholarships so far, according to Alena Kudzko, a research fellow at GLOBSEC Policy Institute in Bratislava and a 2014 graduate of CEU from the Department of International Relations and European Studies. Pressure from non-governmental organizations has resulted in funding and space for a transit center, but Slovakia remains an unattractive destination for migrants because of the lack of an integration program and insufficient government support, Kudzko said. 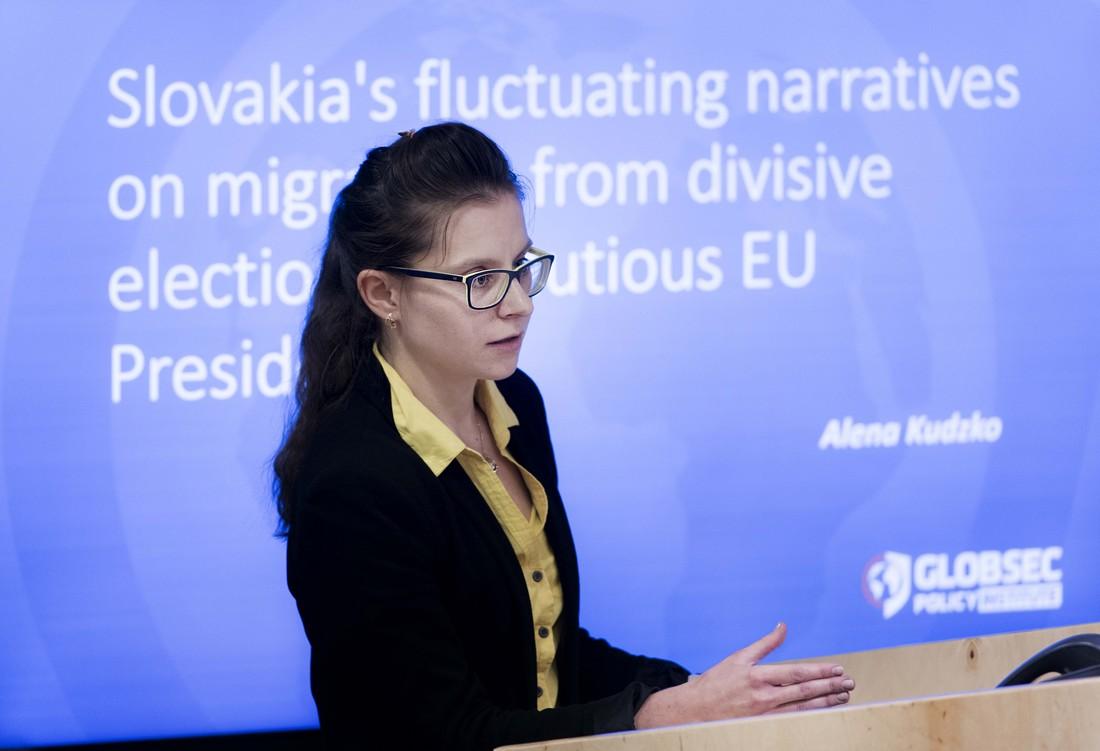 Alena Kudzko, a research fellow at GLOBSEC Policy Institute in Bratislava and a 2014 graduate of CEU from the Department of International Relations and European Studies. Photo: Friedrich Ebert Stiftung.

The narrative changed in Austria as well, toward the prevailing security threat concept, according to Paul Schmidt, secretary general of the Austrian Society for European Politics. Civil society was active, organized, and able to influence the government position on the issue until it became clear that Germany could no longer accept more migrants. In 2015 about 1 million people entered Austria, with about 10 percent seeking asylum, or 90,000 people in a country with a population of 8 million. That's more per capita than Germany. Society became polarized.

"Austria had a good international image for helping but a political rhetoric that went more brutal, radical and objecting to the civil society reaction," Schmidt said. "The Austrian government tried to turn 180 degrees, to reposition itself and focus on a security-based view, fearing even more the unknown. There has been no genuine answer from the political center."

The solution lies in moving beyond the quota issue, Schmidt said.

"The issue does not go away by building fences," he said. "The quota issue is close to our heart because it's about [European] solidarity. It would be wiser to move to other elements of the solution to this issue." 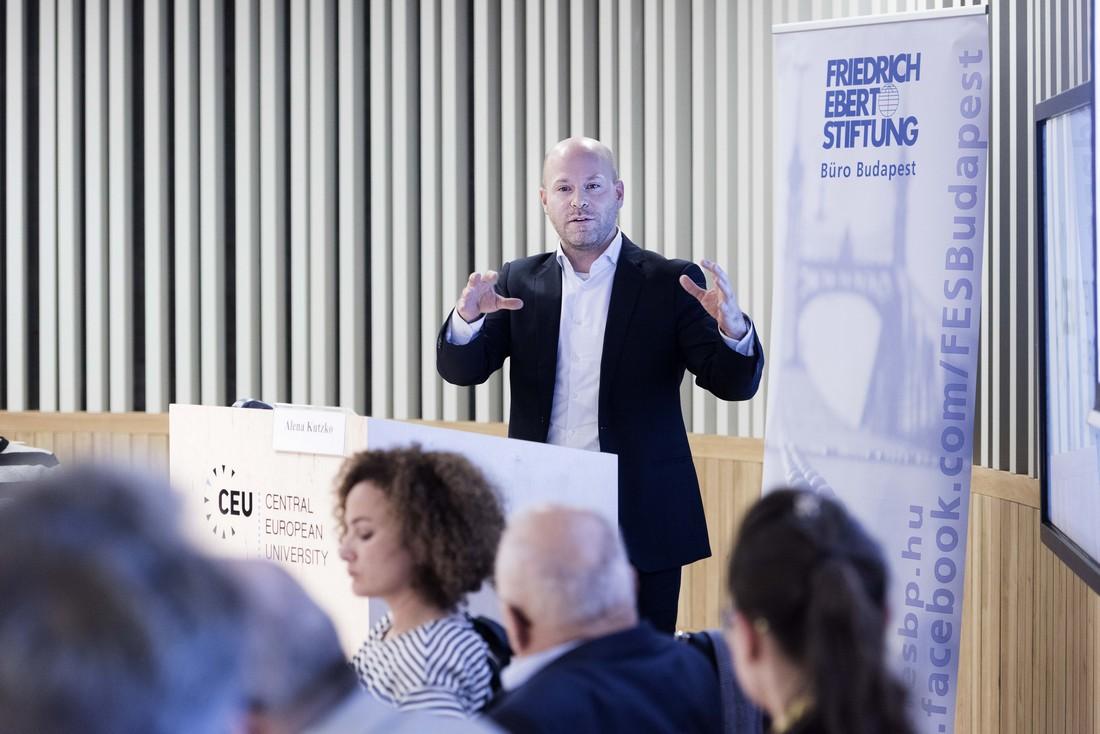