The CEU community and special guests gathered in the University's new auditorium on October 21 to inaugurate the University's fifth President and Rector Michael Ignatieff. Chairman of the Board of Trustees Leon Botstein conducted the investiture during a ceremony complemented by Hungarian music and poetry. The ceremony also celebrated the two new state-of-the-art campus buildings.  Ignatieff is a Canadian professor, award-winning writer, and former politician educated at the University of Toronto and Harvard University.

In his opening remarks, CEU Provost Liviu Matei noted that Ignatieff has been hard at work at CEU since August 1. Matei called it a “special day in the life of the University” as the new president and rector is taking over at the end of the first of three campus redevelopment phases.

“I am so proud to stand here today. Our new campus is just amazing. It is breathtaking,” Matei said. “Our new campus is also a statement, and in more than one way. The mere fact that we built it is an assertion that CEU is here in Hungary to stay. Michael comes to CEU as an accomplished scholar, educator, politician, and writer. He is also one of the very few who can claim a long, steady, global standing as a public intellectual, genuinely committed to and also effective in promoting the cause of open society. He is taking the helm at a time when the University has ambitious new plans while facing major challenges and even some existential questions.” 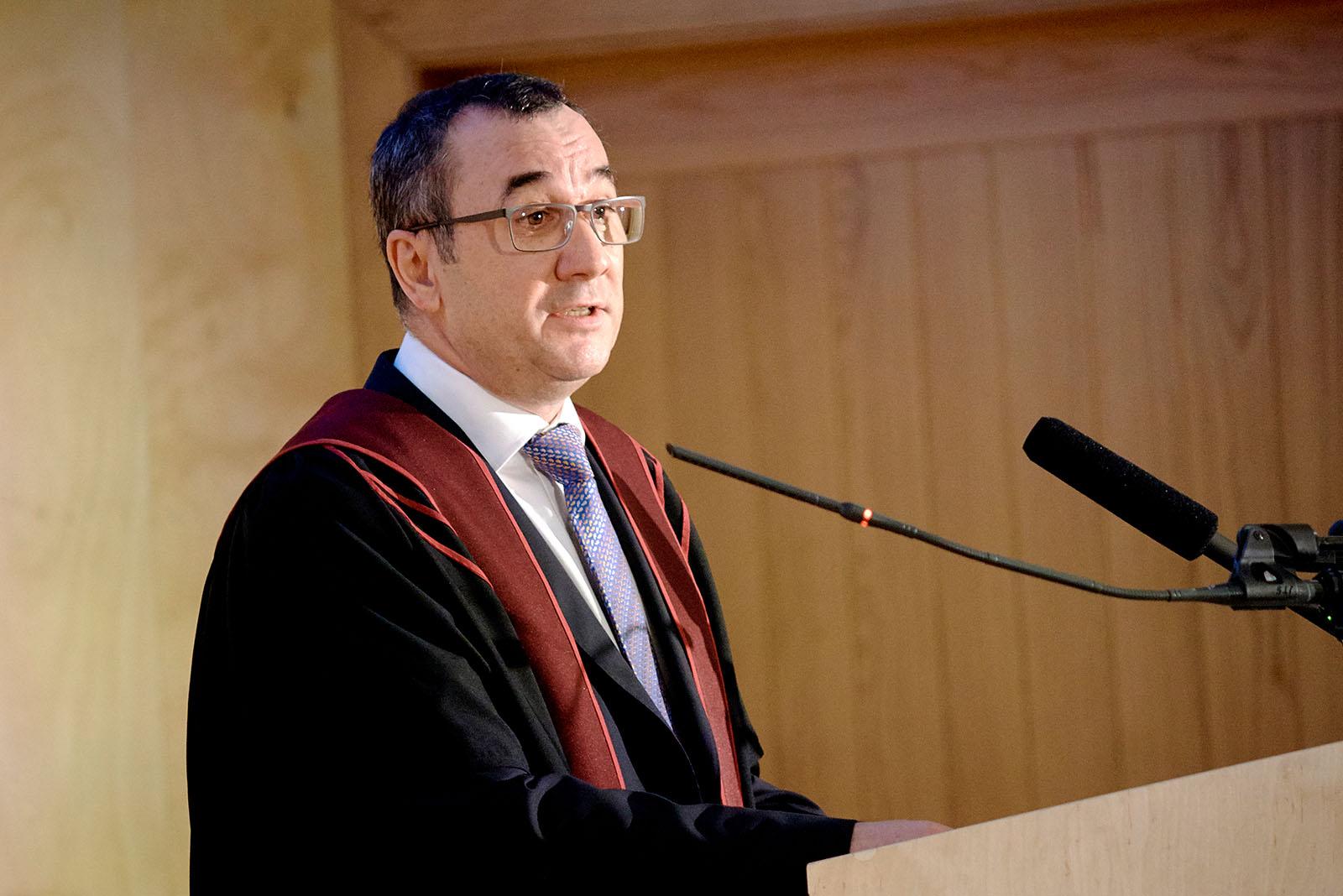 Underscoring CEU's deep roots in Budapest and 25 years in Hungary, Pro-Rector for Hungarian Affairs Zsolt Enyedi noted in both Hungarian and English that Ignatieff is committed to making CEU's Hungarian heritage even more visible.

“We want to contribute to competitive Hungarian academia and we have strong cooperation with the Hungarian Academy of Sciences and other universities and research centers. We welcome our friends from local institutions and know you can count on us as we count on you.” 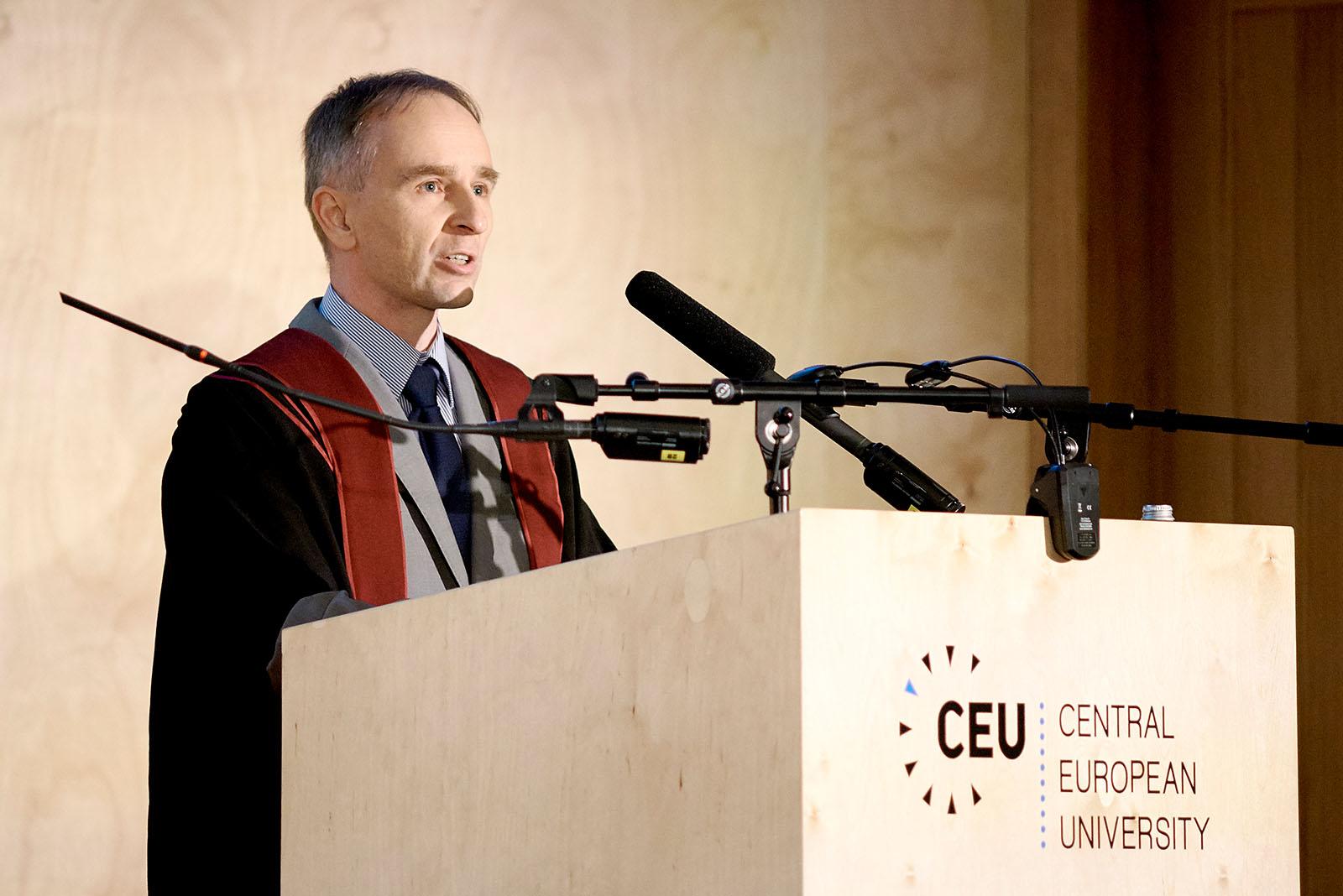 Botstein called Ignatieff's combination of Canadian upbringing and Russian heritage the “perfect combination” for CEU. CEU's location and the makeup of the student body, faculty and staff “make it special,” he said as does the “level of scholarship, the pursuit of knowledge in the social sciences and engagement in active politics.” Noting the pressing global issues of the day, he reminded the audience that universities are crucial during times of crisis.

“As CEU faces its next quarter century, it has the benefit of this new magnificent building, completed under the leadership of CEU President and Rector Emeritus John Shattuck," Botstein said, also acknowledging Shattuck's presence at the event. "CEU also formally welcomes today its distinguished new President and Rector, the eminent scholar, writer, and public servant Michael Ignatieff. These two events augur well for the University's future.” 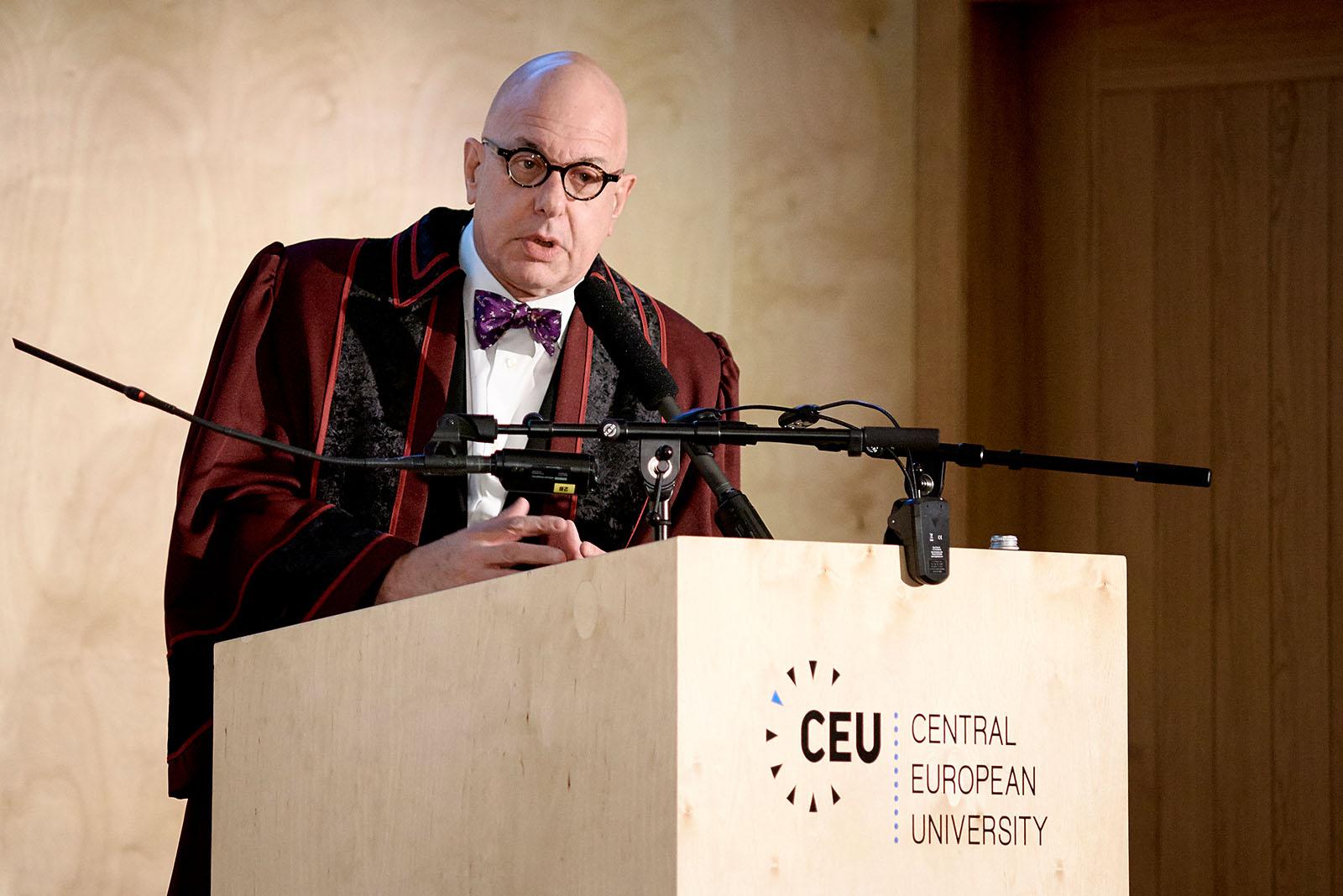 Chairman of the CEU Board of Trustees Leon Botstein speaks at the inauguration of Michael Ignatieff as CEU's fifth president and rector. Image credit: CEU/Daniel Vegel

After the opening comments, Zsuzsanna Kovacs, a student in the Department of Legal Studies and an alumna of CEU's Roma Graduate Preparation Program, read “By the Danube,” a poem by Hungarian poet Attila Jozsef. He wrote the lines: “Creating order in our common matters/This is our task. We know it will be hard.” 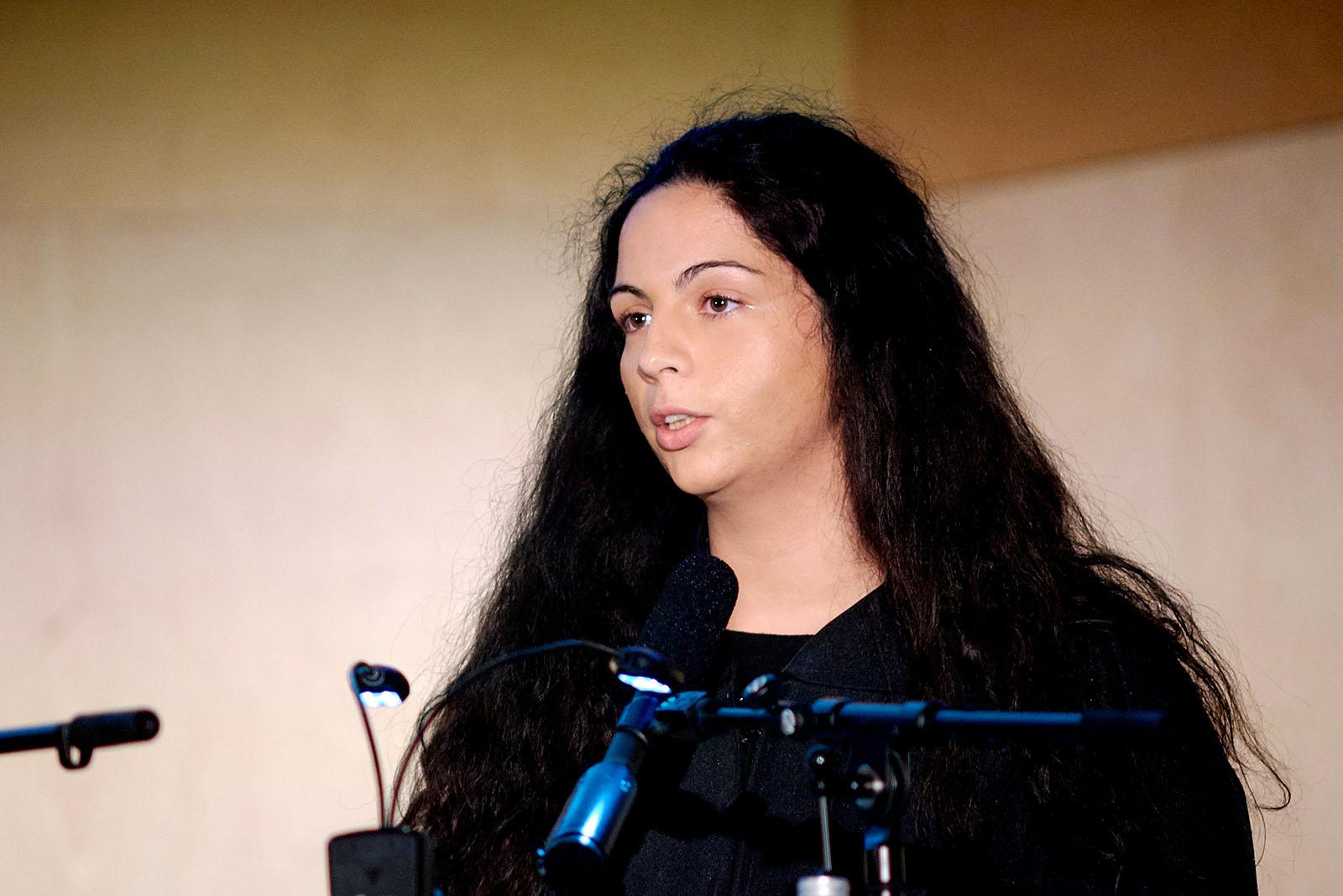 Ignatieff was inspired by these lines when running as a politician in Canada and he again turned to them for his inauguration at CEU.

“Taking up the rectorship and presidency of this institution today, I return to these words again for they also define our task as a university. For it is our vocation to bring order, the order of reason, argument, science and knowledge to the common matters of democratic life. Our democracies have a common life—but there is much disorder in it—the cultivation of suspicion towards foreigners, the manipulation of fear and the knowing disregard for truth. If our democracies were in healthier shape, we could face the challenge of resurgent authoritarianism with confidence, but there are few democracies, whether in this region or elsewhere, that are in good shape. There is so much inequality and injustice; so much corruption and self-dealing, so many unanswered attacks on the independence of institutions, from the courts to the press.”

The one thing we must teach all our students, if our societies are to remain free, he said, is to know what knowledge truly is. He stressed that he must continue to question himself as well.

“As a rector I must never stop asking: what do I know about this institution? How can I understand it better? Only if I understand you, can I serve you, as I hope to do, to the best of my ability. As students, as faculty, we must never stop asking: what is incontestable in our understanding? How do we do our part, however small, to expand the continent of knowledge? The poet was right: all of this is hard. But nothing, believe me, nothing is more important. For if we care about knowledge, if we truly care to winnow the grain of knowledge from the chaff of ideology, partisanship, rhetoric and lies, we will be doing the university’s part in bringing order to our common life.”

Calling CEU “one of my proudest achievements,” CEU Founder and Honorary Chairman George Soros congratulated Ignatieff on his role and said he believes CEU is as vital today as it was 25 years ago when it was founded. 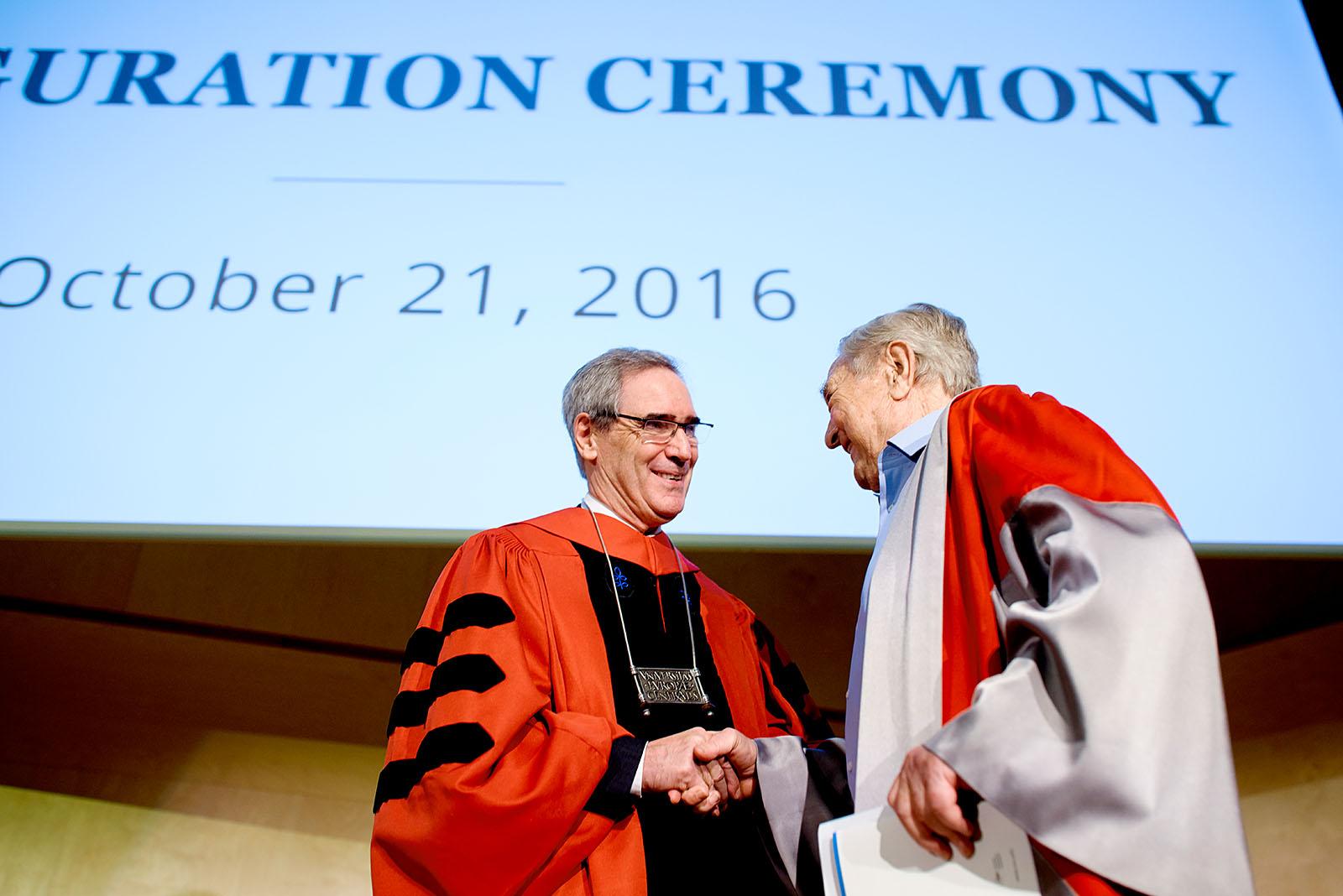 “As many of you know, I used to be opposed to setting up permanent institutions. I never wanted to invest in bricks and mortar. I changed my mind. And I am glad I did,” Soros said. “I saw that creating a university—Central European University—could not only teach the concept of open society, but also practice it. This university would offer courses and degrees in subjects wholly absent in the rest of the region—such as women's studies, nationalism, ethnic conflict, and so on and so forth. It could help ensure that worthy academics and young aspiring researchers could remain in the region. This university would not only be valuable for what it could offer to its own students, but I thought that it could serve as an example for rebuilding public higher educational institutions. And I believe that all of this has been very true. Today, CEU remains a beacon for upholding values of critical thought in a region beset by post-factual disinformation.” 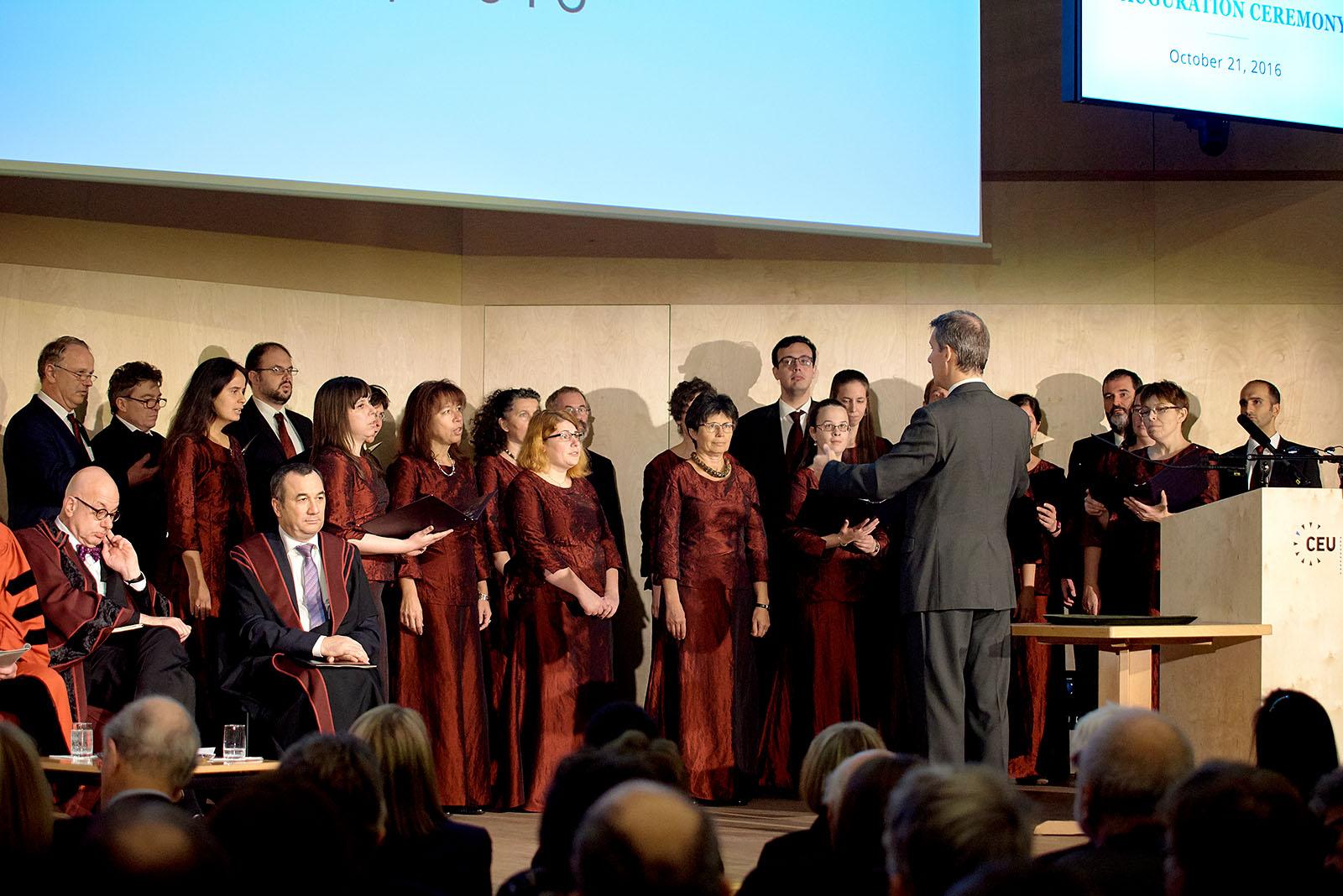 The ceremony concluded with a musical interlude. The Prelude Choir of nearby Corvinus University sang “Esti Dal” by Hungarian composer Zoltan Kodaly.

By The Danube, by Attila Jozsef, Translated by Peter Zollman. Read in Hungarian by Zsuzsanna Kovacs.