CEU received the Digitalization Award 2016 from Siemens Zrt. in recognition of its leadership and accomplishments in using digital technologies to optimize activities across the institution. The prize was presented at the Siemens Gala 2016 at the Varkert Bazar in Budapest on November 24, and was accepted by IT Director Szilard Bedecs. Library Director Diane Geraci was also honored. 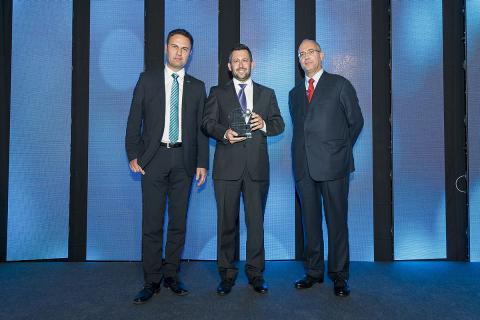 "Perhaps it's no surprise that digitalization is particularly important at Central European University," Siemens Communications Director Adrienn Viragh said at the awards ceremony. "Digitalization is apparent in the university's brand-new buildings, which are not only characterized by fully integrated building management and security technology, but are also energy efficient and environmentally friendly."

CEU was one of five winners selected from among organizations that participated in the second phase of a research project on digitalization among companies and organizations in Hungary. Siemens developed Hungary’s first Digitalization Index, giving the country a score of 3.5 on a scale of 1 to 5. The result shows that Hungarian organizations have dedicated significant resources to meet the challenges of the digital age, but also points to the need and opportunity for further developments.

The prize “recognizes the merits of those companies that lead the league in the use of digitalization technologies,” the company said on its website.