Moldova’s 2014 EU association agreement lies at the heart of the present government’s politics, determining its foreign policy and modernization path, said Andrei Galbur, deputy prime minister of Moldova, at a public lecture at CEU on March 10, organized by the Center for European Neighborhood Studies and the Embassy of the Republic of Moldova.

“I don’t think anyone can argue against Moldova being a European country both geographically and culturally. With the 2014 EU association agreement we have chosen the European model of modernization. This agreement and all the commitments that derive from it are at the core of what this government does presently,” said Galbur.

Looking back on 25 years of foreign policy since Moldova’s independence, Galbur said that it was “permanently in drifting mode”, and that there were various storms, even chaos at times. “But Moldova has finally found its way, a map by which it can orient itself in difficult times.”
Galbur also addressed the difficulties of convincing the population about the necessity for reforms, and discussing different modernization paths instead of posing the easy question: “Brussels or Moscow”. Choosing European integration was a very rational and conscious choice of the majority of citizens in spite of the geopolitical rift in Moldovan society, said Galbur.

It’s important not to lose sight of the objective of modernization, though. Our motivation is not to please Brussels or any other capitals, but to improve the quality of life of Moldovans,” he said.

He sees no contradiction between the free trade agreements that are part of the EU association agreement and Moldova’s trade agreements with the Commonwealth of Independent States. “They are both pillars of World Trade Organization regulations,” he said. 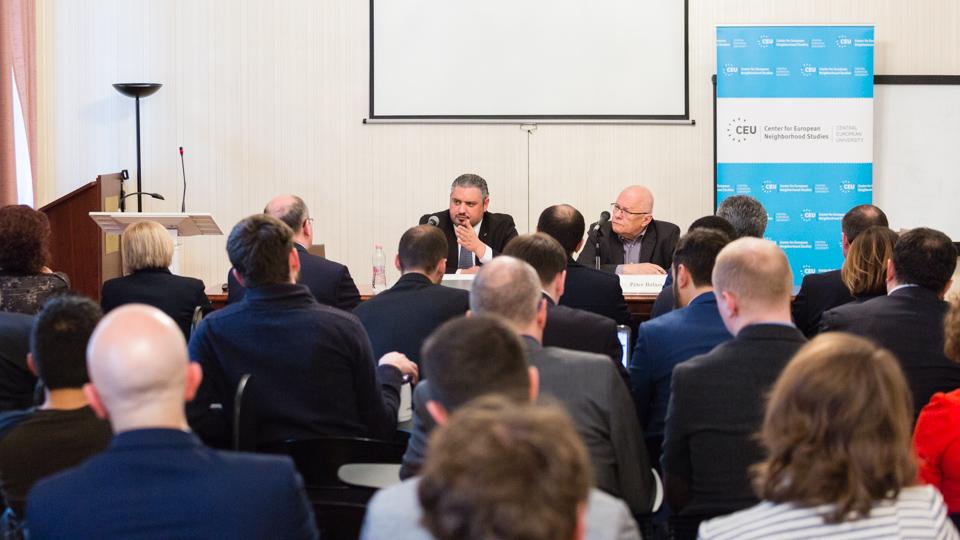 Choosing the European path does not necessitate an anti-Russian stance, according to Galbur. Moldova succeeded in resolving a number of issues with Russia relying on negotiations conducted in a calm manner, based on realities. “We are too small to be players on the geopolitical stage. At the same time we have to be intelligent enough not to become a bargaining chip in the bigger theater.”

Since the dissolution of the USSR Moldova has had to deal with the unresolved state of Transnistria (or Transdniestria), the north-eastern part of the country, that has proclaimed independence from Moldova in 1990.

“We stopped flirting with Moscow, and stopped making promises we cannot keep. But we also stopped being embarrassed to talk about our issues. Russia plays an extremely important role in the settlement of the Transnistrian situation. On the one hand Russia is part of the ongoing multilateral 5+2 negotiations on Transnistria. It also has unfulfilled international commitments when it comes to withdrawing its military troops and ammunitions illegally present on the territory of my country,” said Galbur.

“We have all the necessary ingredients to move forward in the case of Transnistria, as there is no hostility among the population. It’s a strictly political issue that has to be solved in political manner. I am confident that Moldova is a great place for cooperation between East and West,” Galbur said.