May 26, 2017
Public Figures and Other Supporters
#IstandwithCEU
News
CEU in the Hungarian Media

CEU Rector Emeritus John Shattuck, who served as president and rector from 2009 to 2016, published an opinion piece in Hungarian daily newspaper Nepszava May 25. Shattuck is now Professor of Practice in Diplomacy at the Tufts University Fletcher School of Law and Diplomacy, and Senior Fellow at the Carr Center of Harvard’s Kennedy School.

The English version appears below:

An Open Letter to the Hungarian Government

Hungary has a long tradition of academic achievement from which Europe and the world have benefited.  Hungarian mathematicians, natural and social scientists, economists, philosophers, historians, composers, artists, novelists and poets have projected Hungarian culture far beyond the country’s borders.  Before the devastation of two world wars and the brutal grip of totalitarianism, Budapest was a center of cosmopolitan creativity, attracting scholars and researchers from across Europe.  The Hungarian Academy of Sciences, founded in 1854, symbolized the intellectual ferment of this period.

Central European University has played a role over the last quarter century in helping Hungary revive this proud tradition of international academic leadership.  Established in 1991 to restore academic freedom and excellence in the social sciences and humanities after their degradation by fascism and communism, CEU has become a leader in international studies and cutting-edge academic areas such as cognitive science and network science.  CEU has been ranked in several fields of study among the top 100 universities in the world by QS subject rankings, and its faculty have received major competitive research grants from the EU, the US and private foundations.

But CEU is more than a center of academic excellence.  It is a major resource for Hungarians. More than 200 Hungarian students this year are receiving full scholarship funding to attend CEU – the largest number of students from any of the more than 100 countries from which CEU students come.  Forty percent of CEU’s faculty are Hungarian, including leading scholars who have given up positions at other outstanding universities in Europe and North America to return to Hungary and teach at CEU.  The university has opened its doors to the Budapest community for library research, public conferences, lectures and cultural events.  It provides employment to more than 600 Hungarians, pays more than 5 billion forint annually in taxes, and has made a major long-term commitment to Hungary with a total investment of 34 million Euros in renovating its campus in Budapest.  Most important, CEU works in close partnership with other Hungarian universities, engaging with their faculty and students in a wide range of collaborative academic projects.

Legislation enacted last month by the Hungarian Parliament would damage these relationships and jeopardize the role CEU has played in helping Hungary restore its tradition of international academic leadership.  The new law would make it impossible for CEU as an international university to operate in Hungary. Two of the most crucial parts of the new legislation include the requirement to establish a bilateral national level agreement about the operation of the university, and the need to operate a campus in the U.S. in addition to the one in Budapest. But higher education in the U.S. is a matter for the states. Furthermore, CEU’s model is by no means unique – several dozen universities around the world give U.S.-accredited degrees but conduct no programs in the U.S.. CEU has operated like this in Hungary for more than 20 years.

As CEU’s President and Rector from 2009 to 2016, I was pleased to play a role in deepening CEU’s engagement with Hungary, and I enjoyed an effective working relationship with the Hungarian government.  My successor, Michael Ignatieff, has ably led the university in its commitment to remain in Hungary by calling for amendment or interpretation of the new law to respect the university’s autonomy as a Hungarian and international university operating under Hungarian and New York State law.  I respectfully call on the Hungarian government to negotiate with CEU a satisfactory formula that will reinforce the academic freedom of the university as an international academic asset in Hungary.  It is clear from the overwhelming support CEU has received inside Hungary and around the world that such a result would enhance Hungary’s longstanding tradition of intellectual achievement. 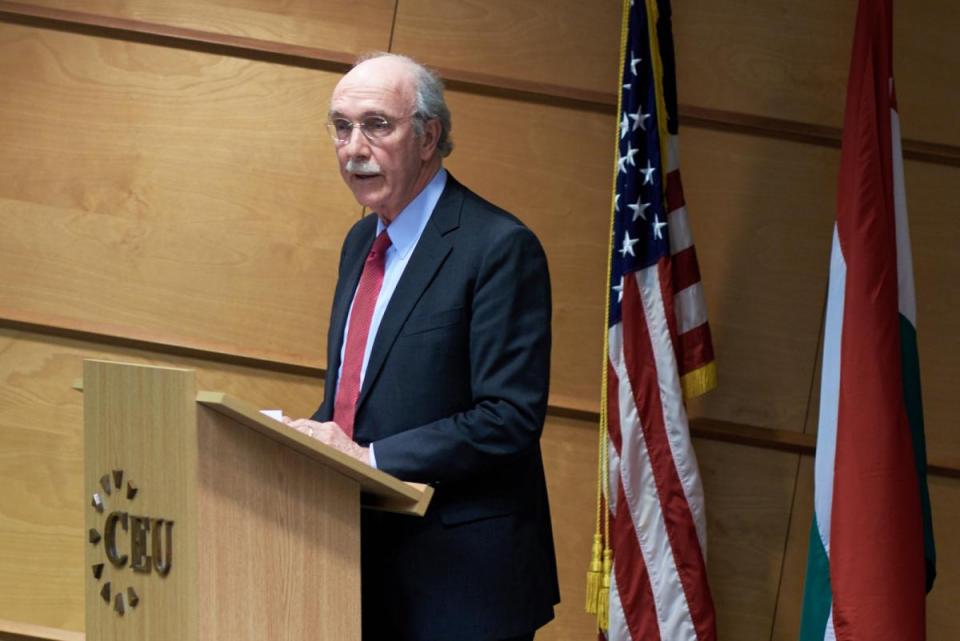