Benner on the Dangers of Demagoguery

When it comes to politics, talk is not cheap, said Erica Benner, a fellow at CEU's Institute for Advanced Study and at Yale's Department of Political Science. “It's a mistake to think that political communications don't matter. Speech matters,” Benner said at her May 25 lecture “Beyond Demagoguery? The Contemporary Crisis of Political Communication,” part of CEU's ongoing Rethinking Open Society series. In the post-Brexit, post-truth, Trump era, political scientists have much to examine regarding how political speech motivates people and supports seemingly drastic political movements. However, as Benner pointed out, many of the political games that might seem new in our era have deep roots in history.

Benner took the audience back to 17th century England and ancient Greece and the writings of both English philosopher Thomas Hobbes and Greek historian Thucydides to illustrate how controversial political speech and demagoguery have been part of the human experience for millennia. Benner quoted Hobbes's famous passage from Leviathan stating that speech is what differentiates man from beast.

“Hobbes's point is that there is nothing 'mere' about political communication at all,” Benner said. “Language is what makes society possible. It's what allows people to communicate their opinions, give reasons for their actions, and make laws and compacts that prevent war. If you want to keep the human species from going the way of the wolves, there can be no more important task than clarifying and defending the shared meanings of words and getting clear about the norms that ought to regulate political speech.” 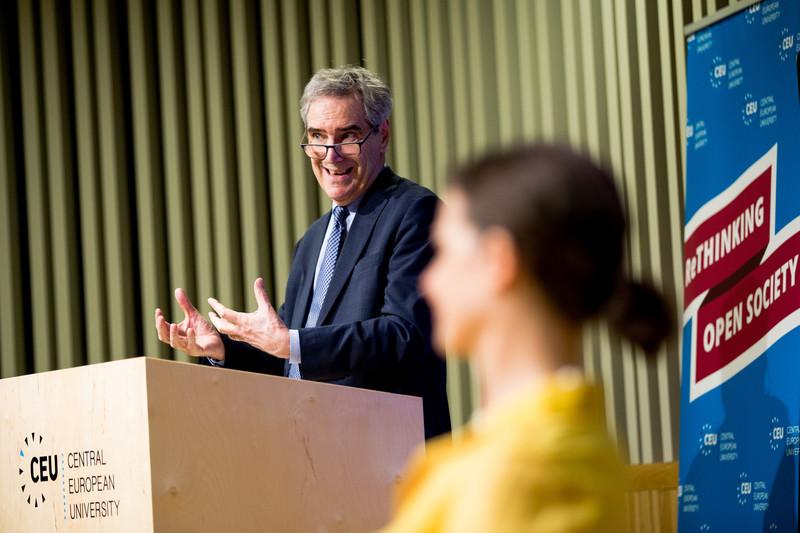 We must pay attention to cultural contexts here, Benner noted. For example, shouting and heckling are common in British Parliament but wouldn't be acceptable in Japan. In Western democracies like the UK and U.S., the citizenry mostly accept that there will be some spin coming from their elected leaders – that there is not 100 percent transparency. Although this may seem chaotic, these are often signs of a healthy democracy, she noted.

“In robust, open societies, even healthy political communications can look deceptively unstable,” Benner said. “One of the marks of open society is that it welcomes different opinions and values and encourages hard-hitting debates among them. Defenders of open society, I think, tend to agree that when political systems allow vigorous arguments among citizens, they end up stronger and more stable than systems that repress debate.”

If somewhat ordered chaos is normal in healthy democracies, then how do we know when things are going off the rails?, Benner asked. Going back to Thucydides, Benner noted that he talked about the meaning of the word “justice” and how it was corrupted during the Peloponnesian War.

“The word 'justice' was understood at the beginning of the war as 'something that's fair for all,'” she said. “As the war went on, it became 'justice for us,' and, at the end, it became 'the advantage of the strongest.'”

This is a key moment when people start speaking a different political language, she said, and demagogues use this to their advantage. Benner said demagoguery has the potential to do a lot of damage to our societies and to our psyches and notes that it is not just uneducated, inexperienced people who fall prey to manipulation.

The damage begins, she thinks, with demagogues' misrepresentation of reality that fails to tackle real problems. Their ability to manipulate removes citizens from real debates and they become more passive and easier to control. Political quackery (or charlatanism) allows demagogues to discount real political expertise that can be useful in sorting out differences of opinion. Another sure sign of demagoguery, she said, is scapegoating or pitting citizens against one another. This was seen in both the most recent U.S. presidential election campaign and the lead up to Brexit. Demagogues also use flattery to gain supporters, convincing people that what pleases them is more important than coming to terms with others who do not share their beliefs. All of this breeds contempt among fellow citizens.

One thing that has changed drastically since the origins of democracy in Greece is how we use technology to communicate. Benner sees the Internet as both a tool for those who wish to manipulate and troll, but also as a tool for likeminded citizens to join forces. Another way in which the Internet has changed the game is the collection of psychological data from the electorate that is used to create targeted messages in order to gain support. Benner pointed out that this tactic was used in the “Leave” campaign in the run up to Brexit, but also by the Obama campaign when he was seeking a second presidential term. Benner noted that this is a crucial element of politics as, conceivably, there could be a day when only certain companies or individuals who can afford to buy this kind of data could swing campaigns one way or the other. 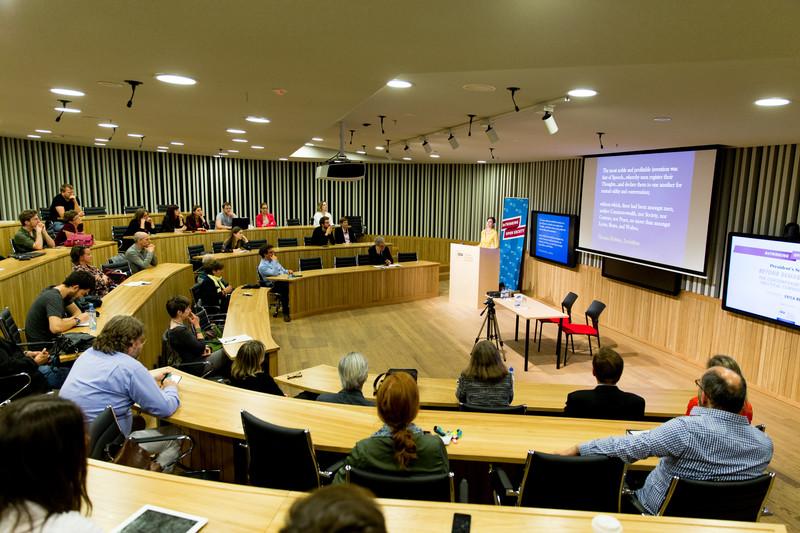 Benner thinks we are right to worry even when things are “just” bad (not necessarily critical), but she remains cautiously optimistic. She believes we were shocked into reality by events like Brexit and Trump's election. “We have to be vigilant against demagoguery and check its harmful effects all the time, not just when democracy is under threat,” she said. People are only willing to put up with so much, she noted, and they don't like to be “played.” She sees some hope in the fact that people around the world have taken to the streets to raise their voices on a variety of issues and that France rejected Marine LePen in their recent presidential election.

“Friends of open society also need to win people over by persuasions as well as by policies,” Benner concluded. “So, despite some glimmers of hope, we've been doing a bad job. We need to get out of our bubbles and try to understand why people vote for demagogues. We shouldn't just be second-guessing the reasons; we need to engage and listen.”