CEU's Open Learning Initiative (OLIve) expanded this academic year by offering, in addition to weekend courses, the University Preparatory Program, or OLIve-UP – a full-time course meant to ready talented students with refugee or asylum status for bachelor's and master's studies. On June 16, eight OLIve-UP students presented research they have been conducting throughout the academic year from a case study of the rise of the far-right in France to an examination of the relationship between immigration and economic growth. Dr. Tahir Zaman of the School of Oriental and African Studies (SOAS) at the University of London gave the keynote speech, titled “Proliferating Noble Sanctuaries: The University and Traditions of Refuge,” tracing the granting of asylum and education from ancient times to the present.

CEU President and Rector Michael Ignatieff opened the conference. “The first thing to say as your rector and president: when I look at you, I think I see what this university is for,” said Ignatieff. “When I look at you, I see something that is so central to the mission of this university; you represent why we do what we do. We need to be a university that reaches out to those who might otherwise not have the opportunity because of trauma, tragedy, and expulsion. A university like ours should exist for those who have suffered the fortunes of geostrategic fate. We should be here to help you achieve your goals. We ask a lot of you and ask you to meet the standard. You've met this standard. You've shown us a lot of things and we've learned a lot from you. Your warmth, your commitment, your devotion and your affiliation with CEU is valuable to me. You are not just a program, you are our very identity.” 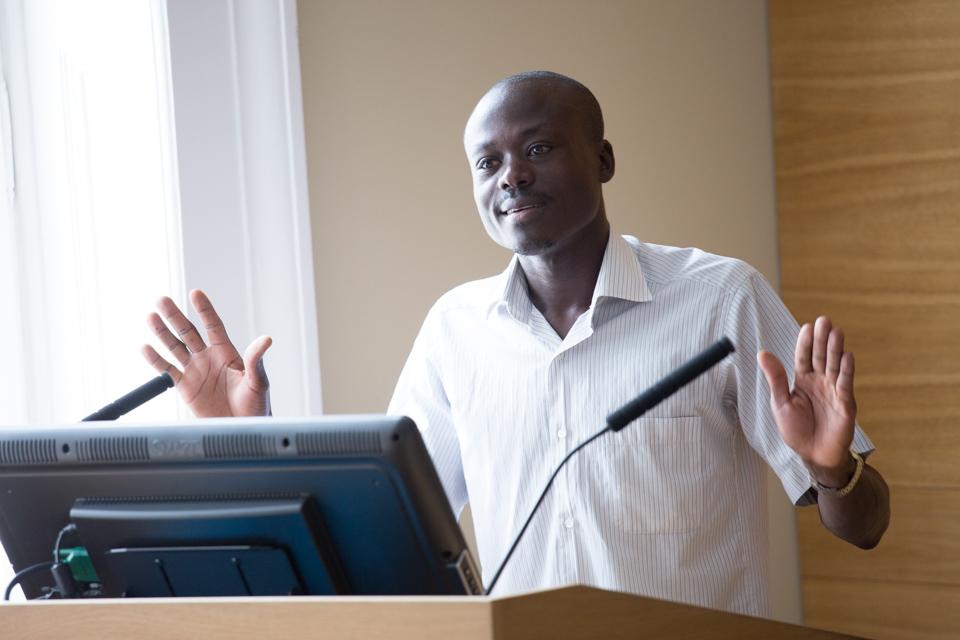 Zaman opened his lecture by emphasizing that the idea of asylum is not new and that our modern understanding of how refugees are defined - “as a person fleeing persecution for whom a particular set of interventions were” due – can be traced back to the late 17th century in Western Europe when Calvinist Huguenots were persecuted. He then detailed the Islamic tradition of jiwar, or neighborliness regardless of one's neighbor's religion.

“The stranger cuts an ambivalent figure in Islamic tradition; standing in for a wide array of characters from students, traders, ascetic dervishes, pilgrims and forced migrants,” Zaman said. “While exile for the stranger may be accompanied by poverty, the response towards the stranger from those who are ‘in place’ is often welcoming.”

He referred to two sacred cities of learning in the Muslim world: Makkah and Madina – “the two cities are the very first seats of learning in Islam.” He extends the idea of the “noble sanctuary” into modern times to ask if contemporary universities continue to provide the same haven, particularly for refugees and asylum-seekers.

“Transformative spaces are often few and far between for forcibly displaced people. For many, they fall under the panoptic gaze of the humanitarian regime. Here they carry the weight of a bureaucratic label of refugee - one that elicits a particular response locking the displaced person into being the object of a care and maintenance regime,” said Zaman. “Where the university reaches out to displaced communities, there exists an opportunity to escape this ossifying regime. For the displaced person to imagine themselves other than being simply a ‘refugee.'” 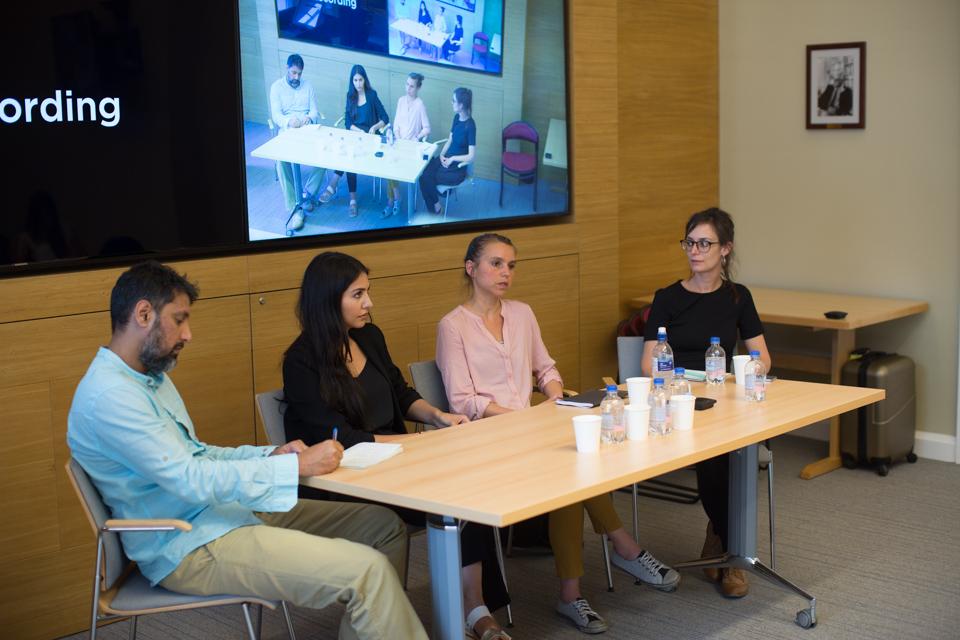 Oftentimes the circumstances require students who don't have access to universities to learn in place and this is where outreach programs can make a real difference. Zaman participated in program initiated by a colleague at the University of East London that aimed to serve refugees and asylum-seekers in the infamous camp in Calais called “The Jungle.”

“Making use of the few spaces of learning [in “The Jungle”] - a school and a library – the “University for all” project set about delivering an accredited course exploring life histories. The team of academics would facilitate workshop sessions where residents of the camp would discuss the telling of episodic life histories of inspirational figures such as Nelson Mandela, Malcolm X, and Malala Yusufzai. Later some residents would tell of their own histories, journeys and aspirations. Those with the requisite language skills put pen to paper and recorded these episodic life histories. The end result was the book “Voices from The Jungle: Stories From The Calais Refugee Camp.”

“Here we have an example of a university reaching out beyond the confines of the campus - extending its sanctuary albeit temporarily,” he said. “This begs the question: can universities offer more lasting sanctuaries? Arguably the space of encounter (accidental or otherwise) that a university can potentially open up is not being adequately made accessible. In the university towns of Europe, we can legitimately ask how embedded these institutions are in the communities in which they stand. What kind of access is granted to local residents to make use of the resources of the university? How accessible are the common spaces of the university?”

After the day's student presentations, experts participated in a round-table discussion to explore how universities can extend their reach.

“It's not enough to just say 'we participate in civic engagement,' you have to open up the university to the community,” Zaman said. “People coming together with a common aspiration – to have this opportunity presented to you by a university to make its relationship with its immediate surroundings is vital.”

Hila Azadzoy, who represents Kiron, an online university for refugees and asylum-seekers, stressed the importance of trying to reduce the time students are out of school when people are forced from their home countries. 65 million people are currently displaced and less than 1 percent have access to higher education, she said.

“Universities are restrained by budgets and capacities,” Azadzoy said. “These barriers are something that, even with the best intentions, are difficult to get around. There are legal regulations and refugees have no way to immediately get higher education.” 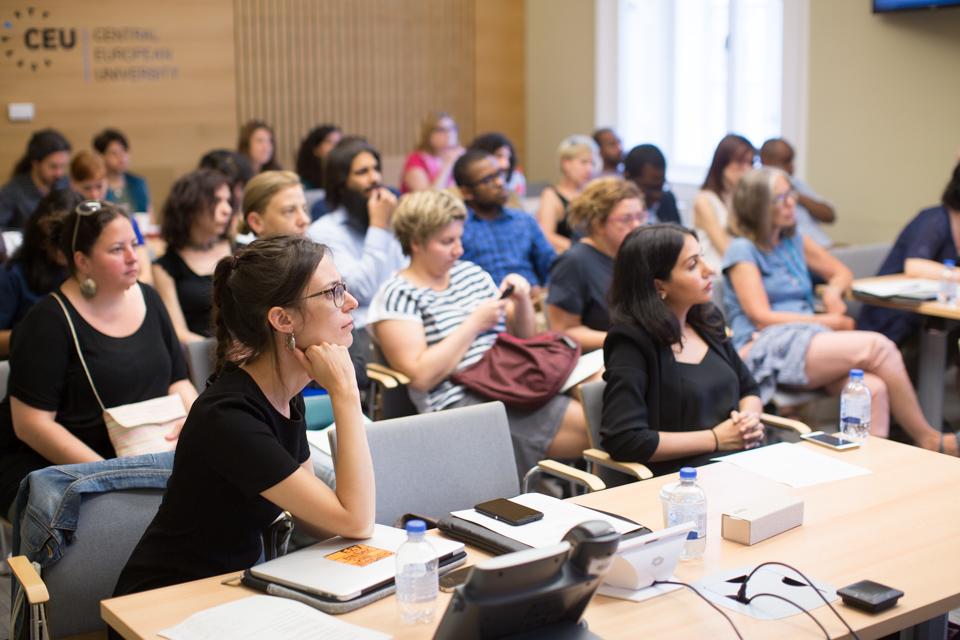 Participants at the year-end conference for OLIve listen to presentations. Image credit: CEU

Kiron gives refugees the ability to continue education immediately when they reach their host country. Ultimately, they can transfer to one of Kiron's 40 brick-and-mortar partner universities where all Kiron credits count. Azadzoy thinks more digital options would help open up higher education to even more displaced people.

Mariann Dosa, who works at the NGO “School of Public Life” in Budapest, said the organization aims to help those who have fallen out of the Hungarian system before they reach higher education.

“What I experience in my own work is that these groups of people do not have access to education. Even if they do, they don't really learn how to think critically,” she said. “It's such a shame that civic and political issues are completely excluded from the education system in Hungary. The very few things that motivate me are the revolutionary initiatives mostly abroad where universities take up the effort to include marginalized people and bring them into the fold and teach them to think critically, to give them the opportunity for higher education.”