CEU addressed the threats to academic freedom around the world from a variety of academic and historical perspectives at a conference entitled “Academic Freedom // The Global Challenge,” held at CEU June 22, 2017.

“Our task today is not a rally or campaign event, it’s a serious academic event, not merely to defend our freedom but to do what universities always have to do, which is to interrogate our freedom, to think about its history, to ask political questions about how our freedom commands support from other citizens, and above all to learn from other institutions and countries where academic freedom is under attack,” said CEU President and Rector Michael Ignatieff in his opening remarks.

Academic freedom is about the tensions between the search for truth and the demands of power, according to Joan W. Scott, professor emerita at the School of Social Science at the Institute for Advanced Study. In Wilhelm von Humboldt’s vision, the modern university’s mission was to “produce students committed to discovery” and contribute to creating a shared national culture. 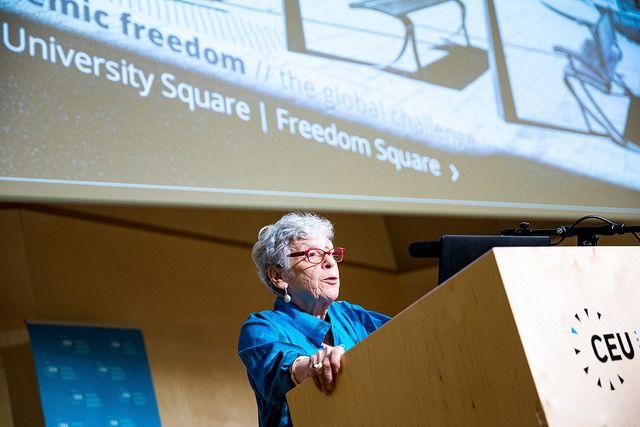 “Unfettered rational inquiry was taken to be the best guarantee of a healthy national future,” she said. “There is a tension between the two avowed purposes of the university; to educate the citizens of the nation-state, and to encourage the critical thinking that would correct abuses of power and furnish the nation with the creativity and change vital to national well-being.”

While authoritarian regimes increasingly try to curb that critical thinking in order to preserve power, it is our duty to hang on to academic freedom and its practice, she said.

“The politics of the moment requires more than critical thinking,” she concluded. “It requires rallying support for the only guarantee we have that democracy can be saved or restored.”

The first panel began with a brief overview of Hungarian higher education since the fall of communism by Attila Chikan, professor at Corvinus University.

“The problems we face in higher education are not new. Recent Hungarian governments did not have a consistent higher education policy,” he said. The introduction of the position of chancellors to Universities is an attempt at directly influencing university freedom, and lex CEU is a major step towards politics-oriented decision-making in the higher education sphere, he said. 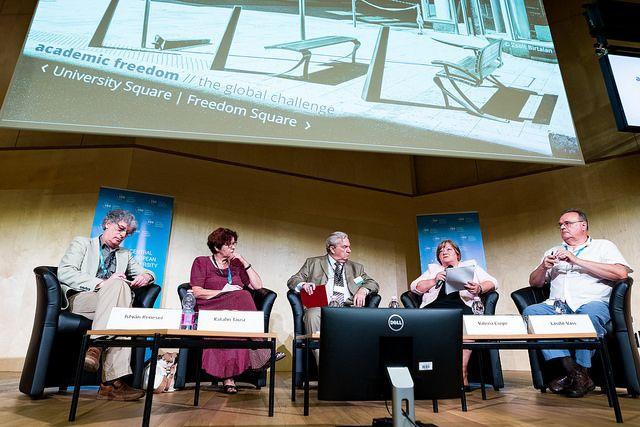 “The government is juggling with universities and their funding, taking away departments and adding them to other institutions,” said Istvan Kenesei, professor emeritus of the University of Szeged. “Government intervention is increasing in higher education and there is very little resistance.”

He cited the role of chancellors, the reconfiguration of the Accreditation Board in favor of the delegates of the Ministry of Human Resources, and the Ministry’s requisite prior consent to any new degree program as examples.

Laszlo Vass, rector of the Budapest Metropolitan University, sees no direct pressure against academic freedom. The private model can be more effective than the state-sponsored model.

Academic freedom has a long history in Hungary, outlined by Katalin Tausz, professor of Eotvos Lorand University (ELTE). “The objective of the university is to develop free individuals for a free society,” she said.

Panel 2: Academic Freedom: the Threat Within

“You can’t have a great university without commitment to and institutionalization of academic freedom and free inquiry,” Jonathan Cole, John Mitchell Mason Professor at Columbia University, said as he opened the second panel. Today, attacks on academic freedom come from within, mainly from students attempting to abridge free inquiry.

“Those who want to shut down speakers don’t see themselves as censors but as advocates of social justice,” Professor Allison Stanger of Middlebury College said regarding the conflict within American academia. In March 2017 Stanger was physically attacked by students protesting against Libertarian author Charles Murray speaking at Middlebury. 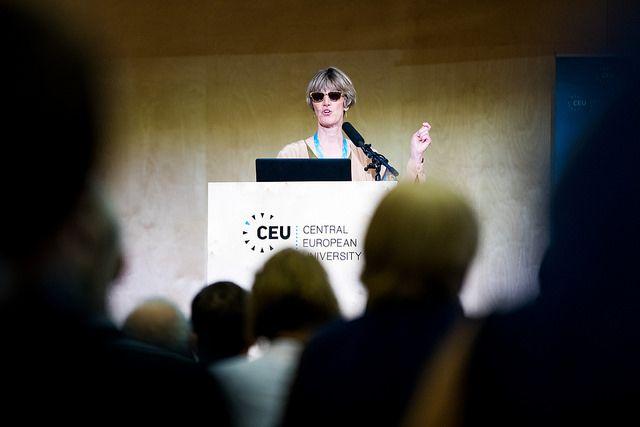 Following the presidential election, the “alt-left” feels they have to fight fire with fire using Trumpist tactics, rebelling against liberalism itself, she said. “Central Europeans should know better. The opponents of free speech, free inquiry and free association must be denounced.”

Should universities be egalitarian safe places where speech is careful and respectful of feelings? asked UCLA Professor Rogers Brubaker. As university paternalism makes feelings arbitrary in what constitutes harm, universities are transforming into spaces of constrained, limited exchange, producing docile subjects, he argued.

The mounting pressure and the competition for external funding is even more intense in Europe than in the U.S., said Helga Nowotny, professor emerita at ETH Zurich. The communication between society and academia must improve and more public engagement is needed, with natural science leading the way, she suggested.

Panel 3: Academic Freedom and the State

“Institutional autonomy is a prerequisite of academic freedom, and it is CEU’s autonomy that was attacked,” said Liviu Matei, CEU provost and pro-rector, who opened the third panel. Based on the fact that Myanmar’s new higher education law contains actual language from the Practical Handbook on University Autonomy prepared by CEU to assist the country’s university reform means “engagement with the state is necessary and it can work.”

“Universities increasingly control their professors’ participation in public debate in the United Kingdom,” said Nirmala Rao, vice chancellor of the Asia University for Women, Bangladesh, who also served in senior positions in higher education institutions in the United Kingdom.

Assessing the state of academic freedom in the Indian subcontinent, Rao said that “academics quickly learn what topics are better left unstudied.” Caste, religion and gender are the most controversial issues, and academics studying these fields are often subject to isolation, harassment, and even murder. Rao is not optimistic. She believes that “increasingly intolerant societies will encroach upon academic freedom.” 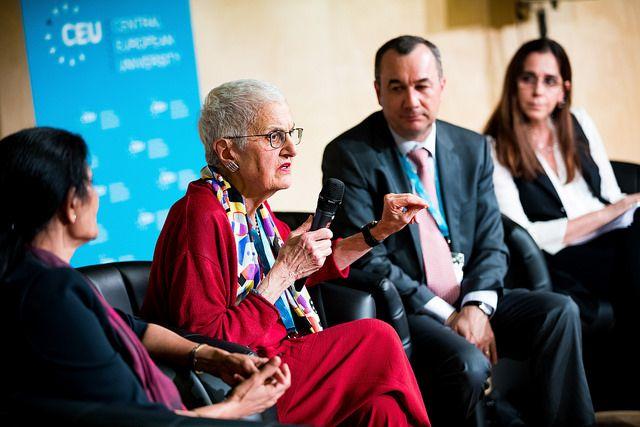 “Over 5,000 academics in public and private universities have lost their jobs in the last year in Turkey and 15 universities were closed,” said Ayse Kadioglu, professor at Sabanci University. “What is happening in Turkey is an unprecedented erosion of academic freedom.”

Many of these people were imprisoned and many had their passports revoked. In the face of these drastic measures, Kadioglu still believes that capitulation is not an option. “As academics we want to show the world that we want reason. We want to keep the channels open for discussion.”

In the United Arab Emirates, a limited form of academic freedom exists on campuses, said Catharine R. Stimpson, professor at New York University, Abu Dhabi. “There is an ironclad guarantee of academic freedom on campus, but it is limited to these ‘enclaves’ only. The handbooks also make it clear that professors have to pay attention to the legal and cultural environment of the country with its belief in Islam,” Stimpson said.

The conference concluded with a keynote address by Nobel Prize-winning author Mario Vargas Llosa, a staunch defender of democracy. He ran for president of his native Peru in 1990 and, although he did not win, he continued to fight for democratic ideals in his country and beyond. 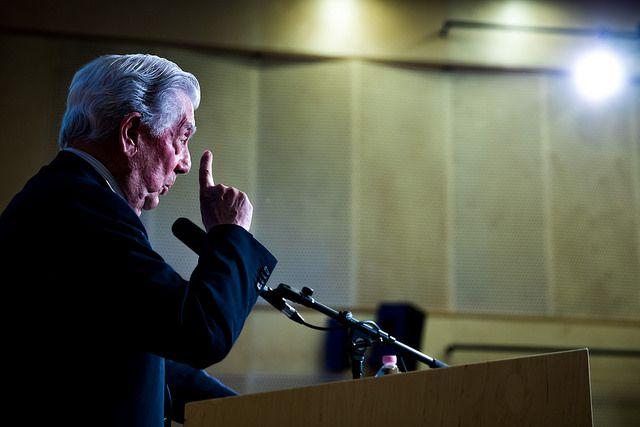 Llosa praised CEU for its high academic standards and also for preparing its students for the real world and encouraging them to be good citizens. The latter, he said, is “also one of the obligations, the goals of any serious academic institution in the world in which we live.” Llosa, now 81, witnessed dictatorships from one political extreme to the other and saw the effects on everyday people.

“What does it mean to be a good citizen? The essential good citizen is a citizen that has a critical spirit and doesn't permit himself or herself to be convinced by the powers of this world that he or she is living in the best of worlds,” he said. “Never is a society the best of worlds. There are always things that are lacking that are necessary or indispensable. To have better opportunities and to have a better life – this is something that only democracy permits... Democracies are imperfect and some are very corrupted, but a bad democracy is much better than a good dictatorship.”

He warned against the dangers of nationalism and populism which he said have been exacerbated by people's fears of globalization, open borders and migration. These same fears have been harnessed and used against CEU, he said.

Llosa pointed out the importance of CEU and its fight for academic freedom, likening CEU's plight to the struggle for the direction Europe will take in the coming years.

“Thousands of people all over the world have understood that what is happening here is an extremely important battle for the future of Europe,” he said. “The defense of CEU, I think, is the defense of what Europe wants to be: a creation of the culture of freedom, the culture that has produced the most important social, culture, political achievements in the history of mankind. For the future of this Europe that we are constructing now is probably the most ambitious project of the culture of freedom in history. It is something that is already a reality that has produced almost 70 years of peace on a continent that had been destroying itself and we have now a construction that represents something extremely ambitious, not only for Europe, but for the rest of the world.”

Click below to see a video of Vargas Llosa's remarks.