Three Nobel laureates and a winner of the Brain Prize, John O’Keefe, Edvard Moser, May-Britt Moser, and Gyorgy Buzsaki, respectively, spoke at CEU August 31 at a neuroscience symposium hosted by the Department of Cognitive Science. All four scientists expressed their support for CEU’s efforts to remain in Budapest as a free institution dedicated to academic and research excellence.

The scientists shared their research results revealing how the brain solves the problem of representing real distances and spaces as well as abstract cognitive spaces and related knowledge at the symposium, entitled “Brain Mechanisms of Navigation in Physical and Cognitive Spaces.” In his opening remarks, CEU President and Rector Michael Ignatieff not only welcomed the distinguished researchers, but said their presence represented the important mission of any university.

“This is a symposium whose tacit agenda is a vindication of what universities are for,” Ignatieff said. “In a free society, we are stubborn believers that there is something called knowledge. Pursuit of knowledge is an arduous moral discipline and we celebrate these scientists for this today.”

O’Keefe and the two Mosers, who shared the Nobel Prize in Physiology or Medicine in 2014, as well as Buzsaki, winner of the inaugural Brain Prize in 2011, all conduct research that contributes to knowledge regarding the workings of the brain that can directly contribute to the prevention and treatment of cognitive disorders such as dementia and Alzheimer’s, Ignatieff added. 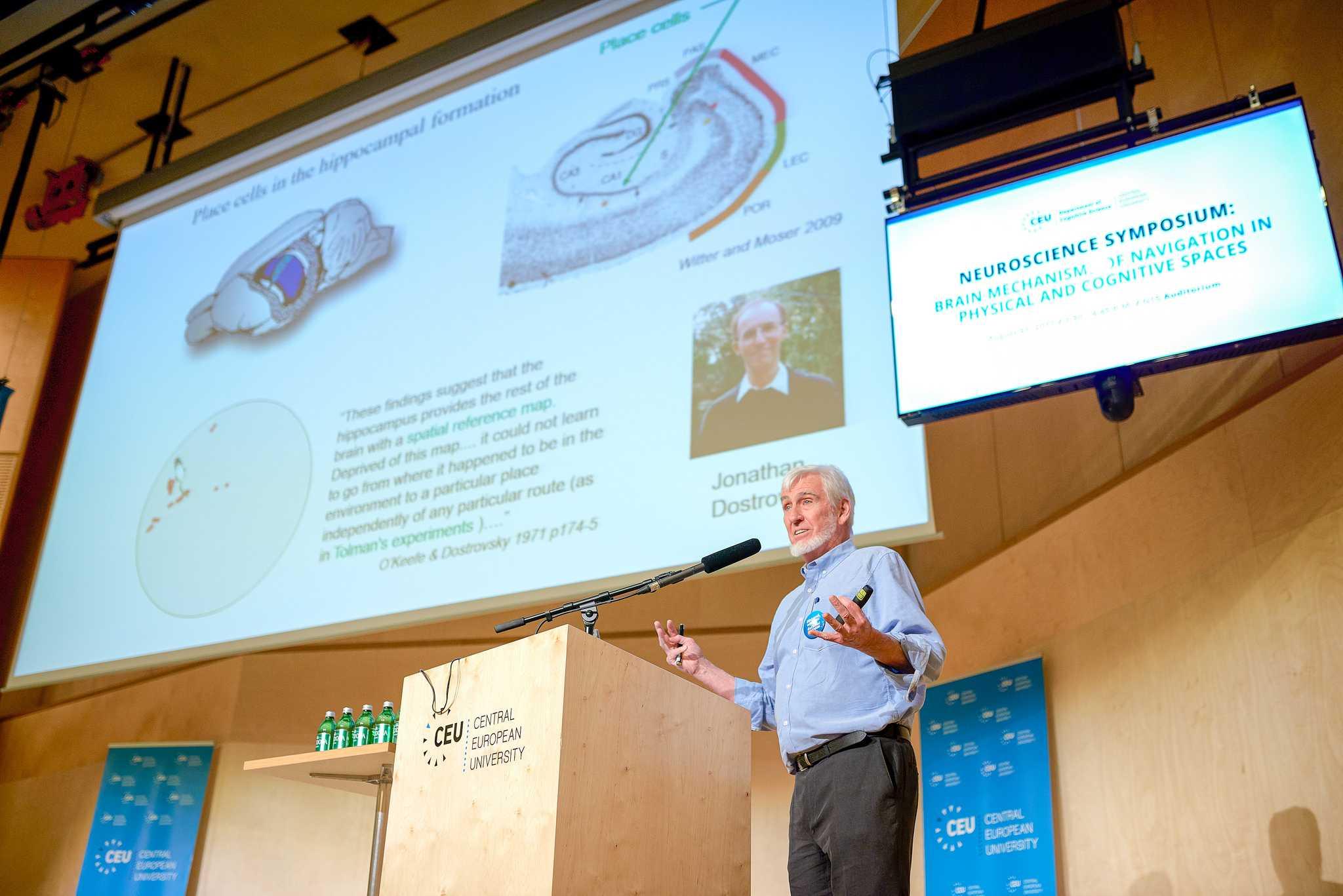 John O’Keefe, Professor at the Sainsbury Wellcome Centre for Neural Circuits and Behaviour and the Research Department of Cell and Developmental Biology at University College London. Photo: CEU/Daniel Vegel.

O’Keefe, Professor at the Sainsbury Wellcome Centre for Neural Circuits and Behaviour and the Research Department of Cell and Developmental Biology at University College London, spoke about research that proved that rats ‘map’ their physical surroundings using place cells in the hippocampus, and that rats are motivated by curiosity. He also determined that rats map their surroundings rather than determining only a route, because a map provides the flexibility to cope with a changing environment. Animals also use routes when they seek a certain goal, such as finding a reward or avoiding punishment, he said.

This is the basic structure of individual problem-solving, as well as research – either through open exploration, or goal-seeking strategies. Blue-sky research, where a lot of new discoveries are made, and research that aims to solve a specific problem, which is also useful. Universities, in turn, must do both exploratory research and train professionals with specific skills, he said.

“When I think about CEU, it is doing both of those functions, both very well, O’Keefe said. “It’s a good Hungarian university. I hope the negotiations have a good output and I look forward to returning in a few years to give another talk on the hippocampus and curiosity.” 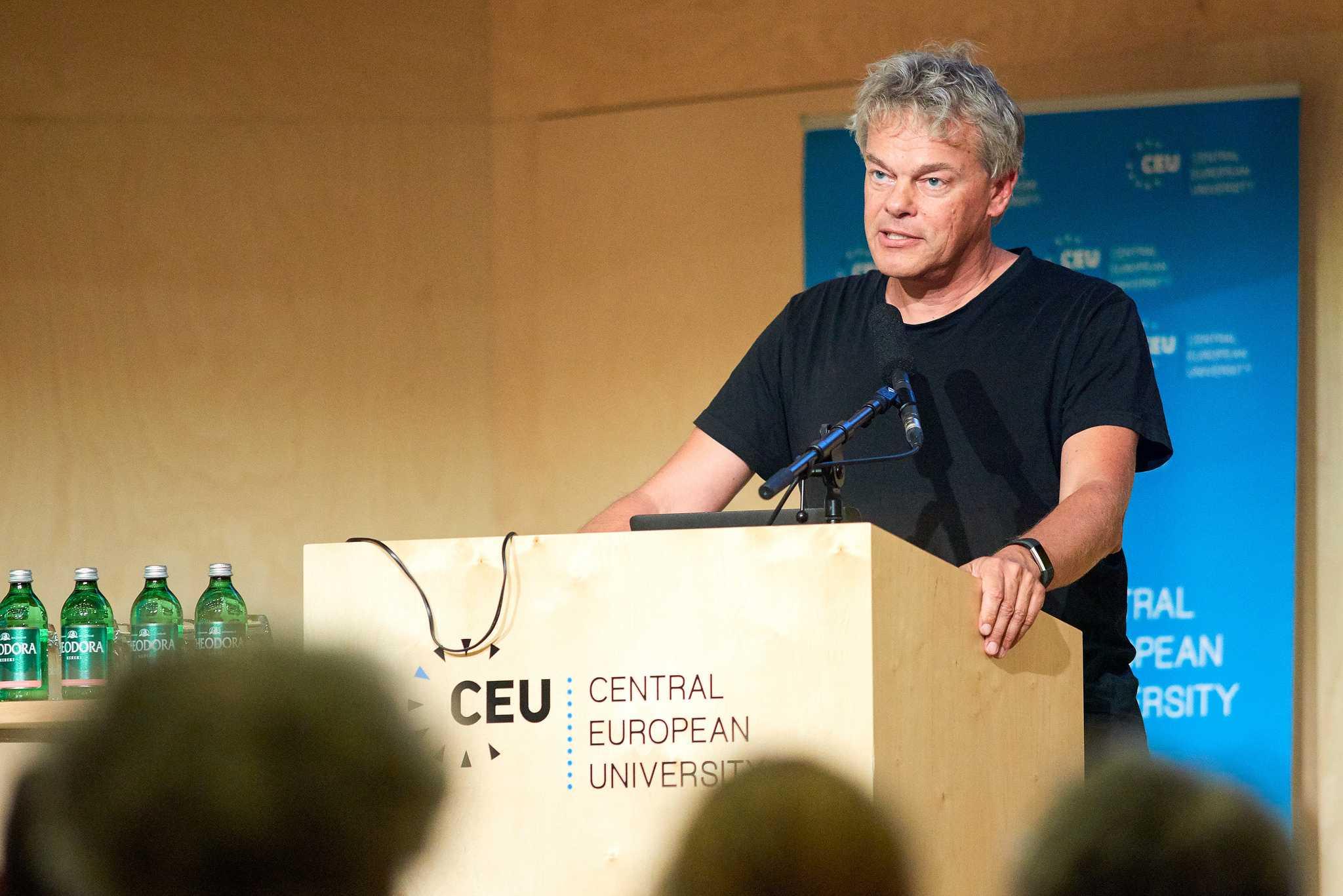 Edvard Moser, professor of Neuroscience at the Norwegian University of Science and Technology (NTNU) and co-director of the Kavli Institute for Systems Neuroscience at NTNU. Photo: CEU/Daniel Vegel.

Edvard Moser, professor of Neuroscience at the Norwegian University of Science and Technology (NTNU) and co-director of the Kavli Institute for Systems Neuroscience at NTNU, spoke about grid cells, which he and May-Britt Moser discovered. Grid cells, found in the cortex rather than the hippocampus, fire in hexagonal patterns far away from sensory inputs, meaning they are generated solely by the brain and form an important part of its spatial mapping system. 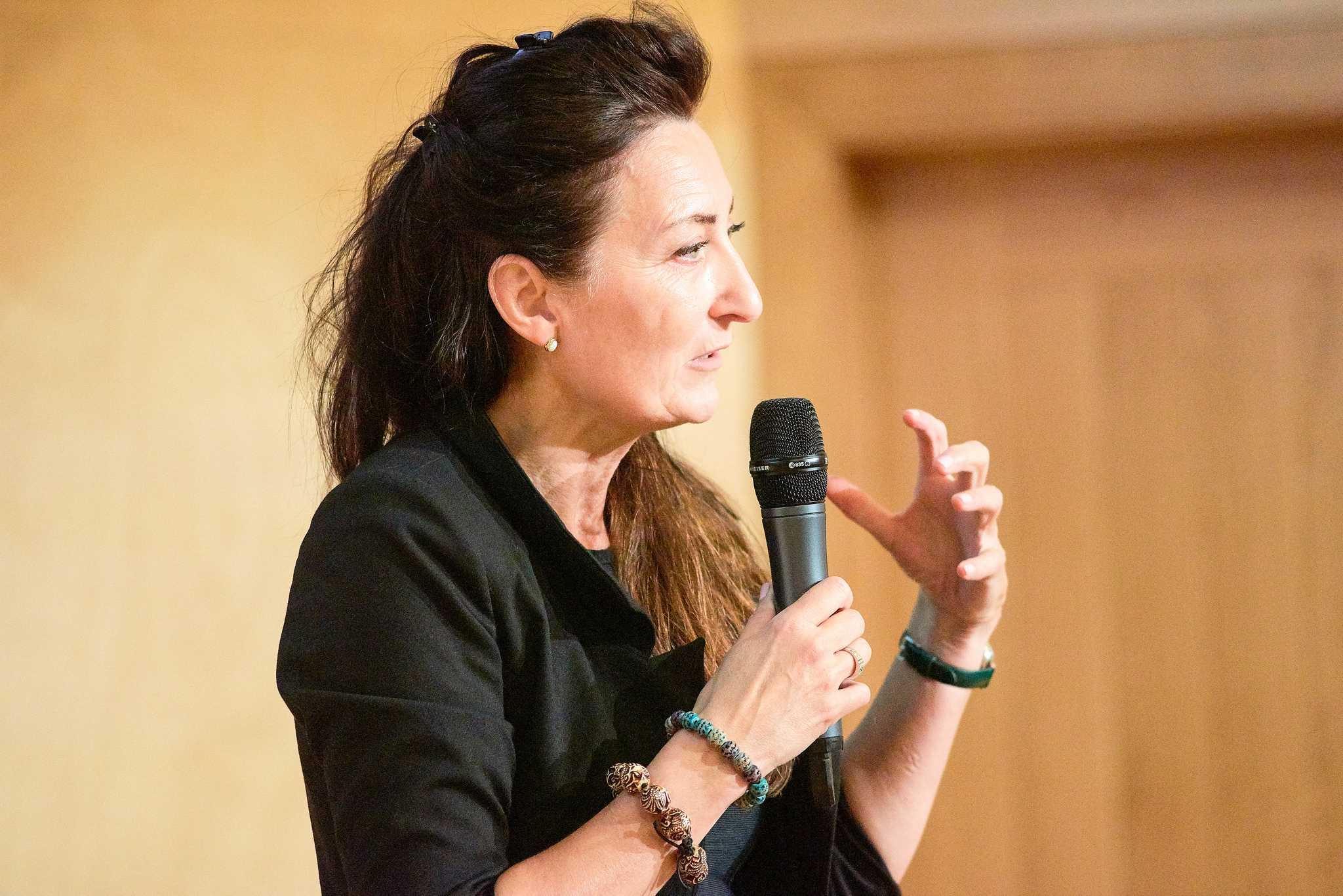 May-Britt Moser, also professor of Neuroscience at the Norwegian University of Science and Technology (NTNU) and co-director of the Kavli Institute for Systems Neuroscience at NTNU. Photo: CEU/Daniel Vegel.

May-Britt Moser, also professor of Neuroscience at the Norwegian University of Science and Technology (NTNU) and co-director of the Kavli Institute for Systems Neuroscience at NTNU, spoke about spatial navigation and the “memory palace.” A whole range of types of cells help with this mapping and navigation, which in turn help us to remember things that may not be spatial.

Gyorgy Buzsaki, Biggs Professor of Neural Sciences at the NYU Neuroscience Institute at New York University, explored the deep relationship between navigation and memory. The hippocampus “organizes memories like a librarian,” he said. It organizes inputs and information, and returns them to the neocortex as memories.

Buzsaki was awarded an honorary doctorate September 1 at the University of Pecs, where he completed his MD before completing his doctorate in neuroscience at the Hungarian Academy of Sciences.