September 15, 2017
News
Press Releases
Center for Teaching and Learning
The Office of the Provost and Pro-Rector

Professor Petra Aczel, Head of the Institute of Behavioural Sciences and Communication Theory at Corvinus University, and Maurizio Pirro, Associate Professor of German Literature of the University of Bari Aldo Moro will receive the sixth annual CEU European Award for Excellence in Teaching in the Social Sciences and Humanities. The award, initiated by CEU Provost and Pro-Rector Liviu Matei and overseen by the University’s Center for Teaching and Learning (CTL), aims to promote excellence in teaching across the European Higher Education Area. Aczel and Pirro each received the Award, and each received the accompanying €5,000 Diener Prize, at CEU's Opening Ceremony for the 2017-18 academic year on September 15.

A leader in the field of rhetorical theory and the author of six books and more than 100 articles, Aczel teaches courses such as New Media in Global Contexts, Theories of Communication, Organizational Communication, and other aspects of new media rhetoric and communication. Her many distinctions and awards include the 2015 Kenneth Rice Prize for Teaching Excellence and 2012 Teacher of the Year, both at her home institution, Corvinus University in Budapest. Professor Pirro teaches courses on German Literature, including advanced courses on German theater, literature and cinema, from the classical to the contemporary period. He has received numerous honors and grants in recognition of his research.

Members of the selection committee were impressed by Aczel's extraordinary commitment and dedication to student learning and her excellence and leadership as both a teacher and scholar. They took particular note of her innovations in teaching rhetorical theory and practice and new media rhetoric and communication. Committee members also recognized her work as a model of research-driven teaching – both in terms of pedagogy and in terms of integrating up-to-date scholarship in all of her teaching. Her dedication to student learning was evident in all of the letters of support the committee received.

“For me, Professor Aczel is not only the most fantastic teacher and supervisor I have ever met and learned from, nor just a highly respected superior and colleague,” said a former student, now colleague at Corvinus. “For me, she is a role model in sustained commitment to teaching excellence, professional preparedness, fastidiousness, endurance, constant self-improvement, hard and quality work as well as love for one’s profession. She is a teacher who possesses the gift of not only influencing the professional development of her students but also leaving a personal impression that becomes an imprint for a lifetime.”

Pirro has introduced major elements of the German seminar model into his teaching of both undergraduate and graduate courses, focusing on student learning and critical inquiry. He proposed distributing during undergraduate students' three years the texts ascribed to German literary canon, devoting each year of the degree respectively to the 18th, 19th and 20th century. That, a distinguished former colleague of Pirro’s wrote, would grant students the necessary foundations for the monographic courses offered during their master’s studies. 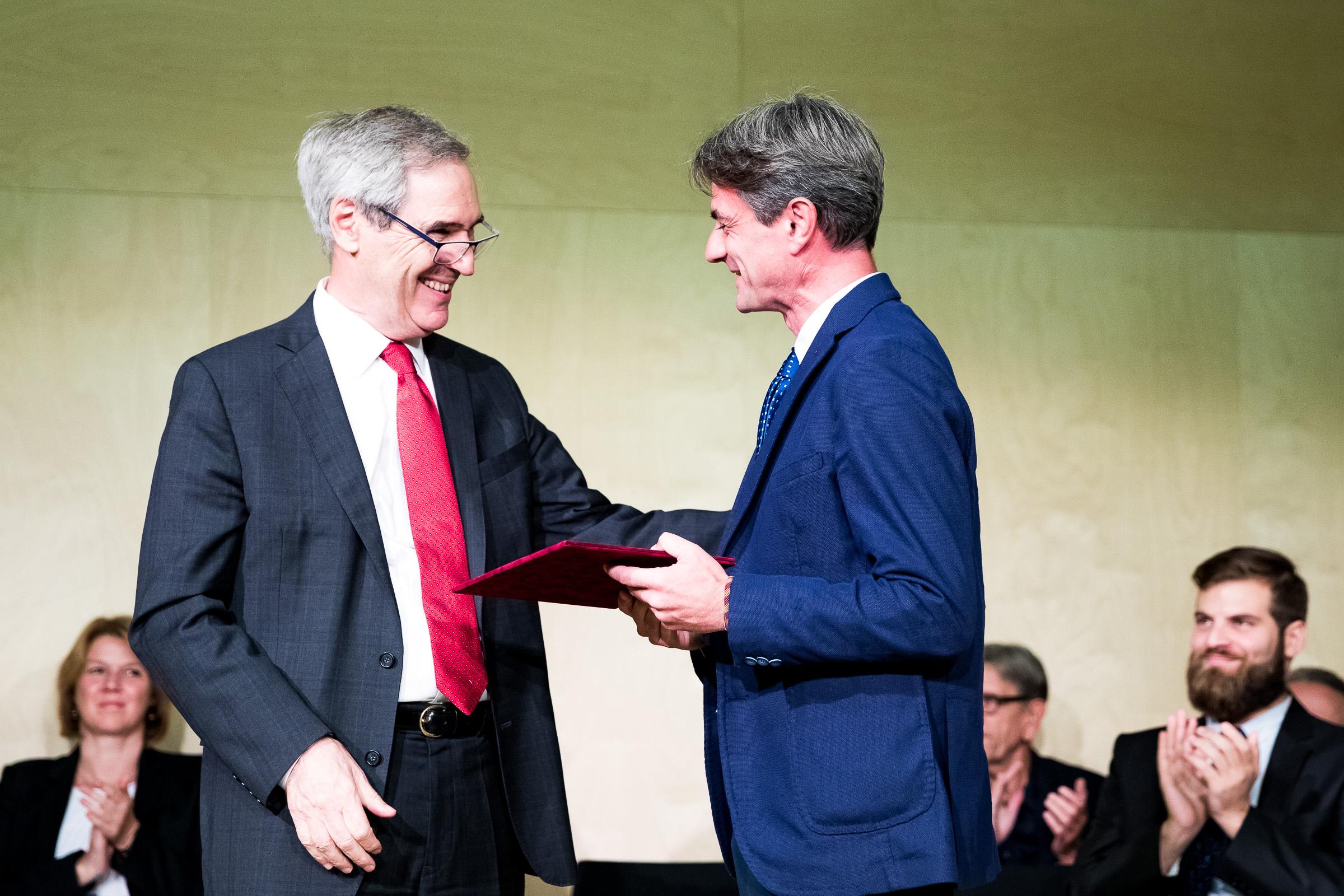 “The transition to the new course structure proved beneficial for students,” he wrote. “They have demonstrated through the years more solid understanding of the subject and an evident ease at understanding complex dynamics a fragmented view of the subject could not make intelligible.”

The selection committee was impressed by Pirro’s sustained attention to individual students’ learning, both inside and outside the classroom; and his introduction of student-centered learning approaches in the teaching. His students submitted a “visual portfolio” to explain the profound impact his teaching has had on their knowledge, intellectual understanding, and their independence as thinkers. In addition to his deep commitment to teaching and learning, the selection committee was gratified to be able to confer the award on an academic whose dedication to excellence in teaching is as impressive as his recognized excellence as a research scholar – a rare combination.

The Diener Prize is made possible by a generous gift from Steven and Linda Diener in memory of Ilona Diener. For further information on the award and past winners, visit: http://ctl.ceu.edu/teaching-award.