CEU President and Rector Michael Ignatieff opened the second season of CEU’s Rethinking Open Society series September 18 with a talk based on his latest book, “The Ordinary Virtues: Moral Order in a Divided World,” published by Harvard University Press the same day. Tolerance, forgiveness, trust, and resilience are essential for a free and open society, but these ordinary virtues can conflict with universalist human rights, Ignatieff said.

Ignatieff’s book is based on a three-year, six-country research project entitled Global Ethical Dialogues, financed by the Carnegie Council for Ethics in International Affairs Centennial project. Ignatieff’s research took him to Brazil, the U.S., Japan, Bosnia, Myanmar, and South Africa, where he avoided “elite discourse,” speaking instead with locals in favelas, south central L.A. and other disadvantaged communities.

“Given the chance, poor communities will form microscopic forms of moral order.” Ignatieff said, adding that in the favelas, good policing was a prerequisite.

In south central L.A., conversations with a former gang leader showed that personal redemption can be enlisted to reproduce moral order. In Bosnia, people who refused to generalize about other ethnicities and saw their neighbors as people, displayed ordinary virtues that enable reconciliation after an ethnic conflict, Ignatieff said.

In Myanmar, religion was capable of representing moral order as well as fragmenting it – one extremist monk used religious arguments to his followers that turned them against Muslims, preventing inter-ethnic accommodation and even worsening ethnic tensions, Ignatieff said. In Fukushima, Japan, he looked at how moral order is recreated after a crisis. In the absence of clarity with regard to the situation following the nuclear catastrophe, only the Japanese family and municipal authority showed resilience. “The lesson of Fukushima for liberal societies is we have no idea how vulnerable we are to natural disasters,” Ignatieff said. 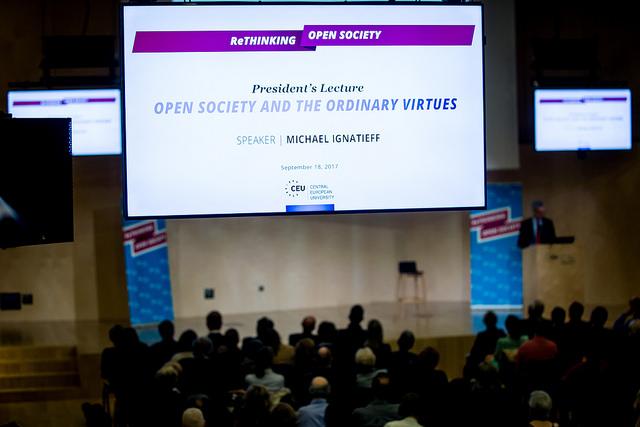 Ordinary virtues obviously serve a purpose, but privilege the local over universal, “us” over “them”, the citizen over the stranger. They are therefore in conflict with the idea of universal moral claims. In the ordinary virtue perspective, tolerance is not an obligation, but a gift. It is not universal, but conditional, granted only if the stranger acknowledges it as a gift and the citizen as the gift giver. This reflected in the tensions today regarding the migration issue – many citizens are not convinced by the United Nations 1951 Refugee Convention requiring sovereign nations to provide asylum to refugees, defining it as a human right.

“The language of the ‘right’ and the language of the ‘gift’ is in the center of open societies’ most difficult problem, the relationship between citizens and strangers. This is in conflict with the human right to asylum defined by international law,” Ignatieff said.

Strengthening the ordinary virtues in political discourse could help sway public opinion in favor of giving asylum to refugees, as Canada does, and in other issues, Ignatieff said.

“We have to think more about the integration between citizens and strangers as a civic contract,” Ignatieff said. “We need to find political languages that empower the ordinary virtues, that allow people to speak. We can only defend the language of ‘right’ is by saying ‘it could be you’. We have to empower the ordinary virtues of compassion, generosity, mercy, and hospitality.”