Being away from home in a new place is thrilling and challenging at the same time. However, the inability to replicate the festive scenario and celebratory vibes in the somewhat alien surroundings at the time of festivities could prove to be disheartening. However, at CEU, where diversity is accommodated and cherished, the South Asian students decided to wash away the blues of missing the festivities by making everyone a part of the Diwali celebrations on October 20, 2017.

Diwali, the festival of lights, is one of the most prominent festivals of India. It is celebrated in different forms throughout the country. Though the ritualistic significance differs among different communities and regions, the underlying idea is celebrating the victory of mind over the malicious ideas. Hence, lamps stand as a metaphor which light up the darkness and loneliness in people’s heart by bringing them together.

Celebrating togetherness was the quintessential idea behind organizing a Diwali party this year. In the times when religious and ritualistic traditions are creating chasms and differences, a bunch of enthusiastic South Asian students decided to highlight the idea festive spirit by sharing warmth and affection, which form of the core of all the rituals. And, what better way to light up everyone’s face than food! 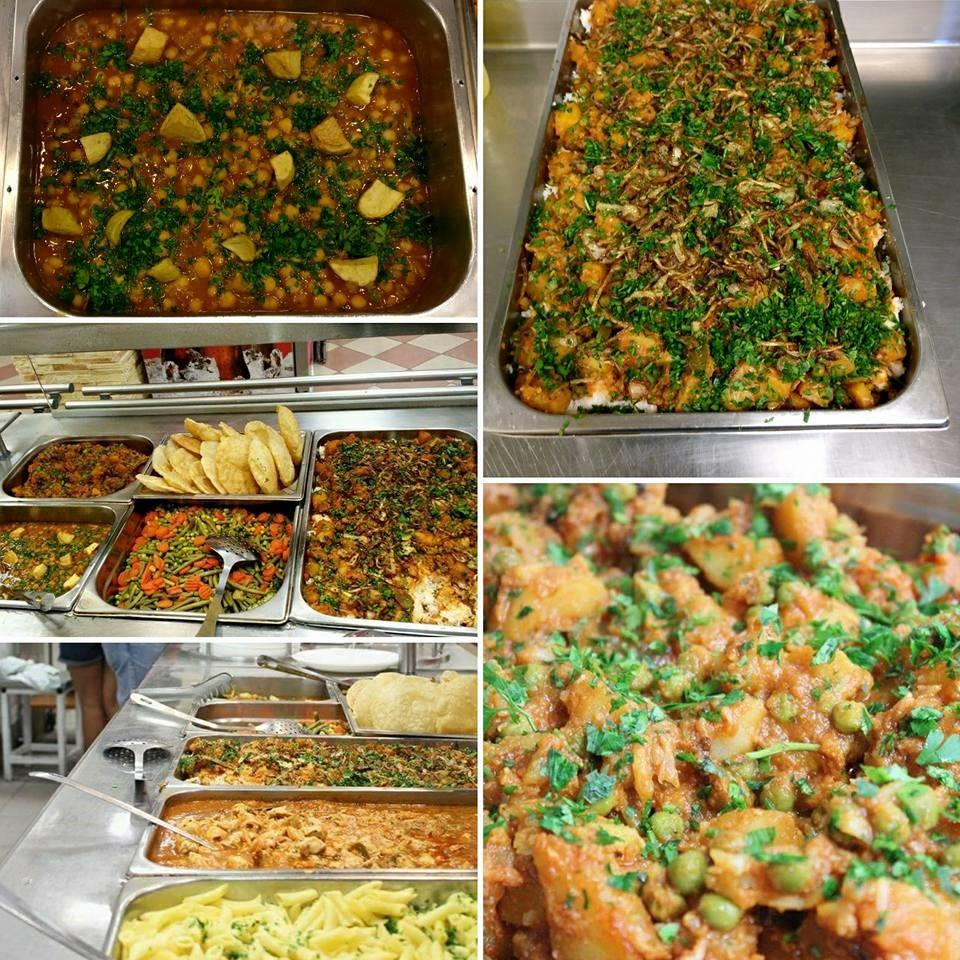 Food was an integral part of the Diwali celebration in the CEU Residence Center on October 20. Photo: Eqra Jawaid

Food forms an integral part of the celebrations across the world. However, making “Indian food” the highlight of the party was a problematic stance, given the vast diversity of culinary traditions within India, and the fact that it would have taken away the essence of inclusion which this celebration was planned. Therefore, the menu recreated some of the popular dishes from South Asia, which are considered both comforting and festive for the locals. “As part of the organizing committee, the highlight of the celebration was experiencing the aroma of familiar spices and condiments wafting from the cafeteria kitchen in Hungary as we cooked food with the help from the ever smiling lunch lady who hardly speaks English”, says Eqra Jawaid, student of Environment Science and Policy at CEU. Well, if this doesn’t describe Globalization at its cultural best, I wonder what else does! 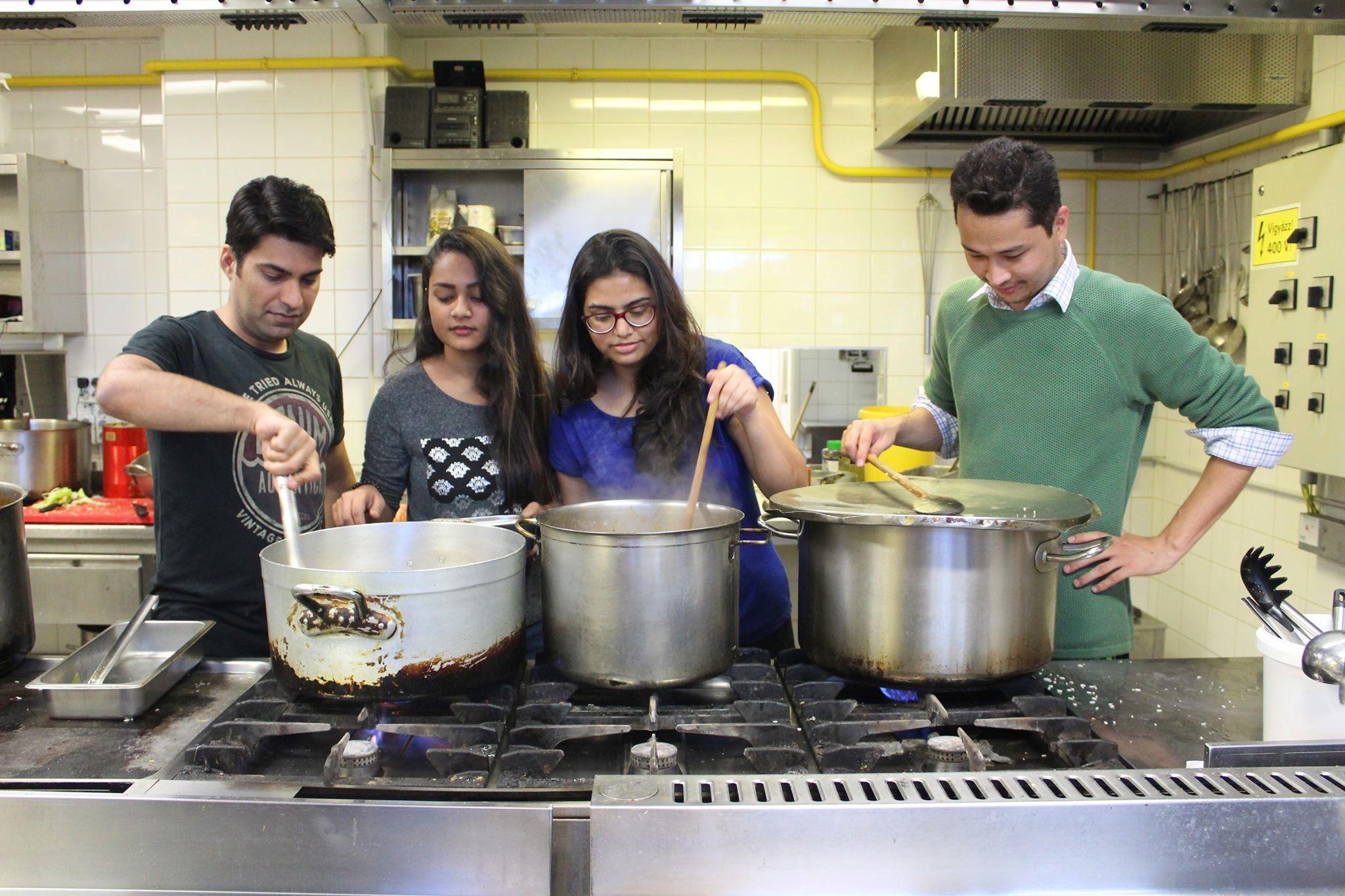 The student community’s enthusiasm was heartening, as many turned up to relish the local delicacies and to be the part of the celebration. Dressing up in the ethnic finery was another way in which some students cheered the efforts of their peers.

The dance floor at the Bambus bar in the Residence Center became a melting pot of cultures that night, when students from different countries tapped their feet to the popular South Asian songs. The discourse around the patchwork nature of culture came to life when students learnt new dance moves, matched their favorite regional dance styles to the tune of peppy music, and shed their inhibitions to make a couple of new friends. 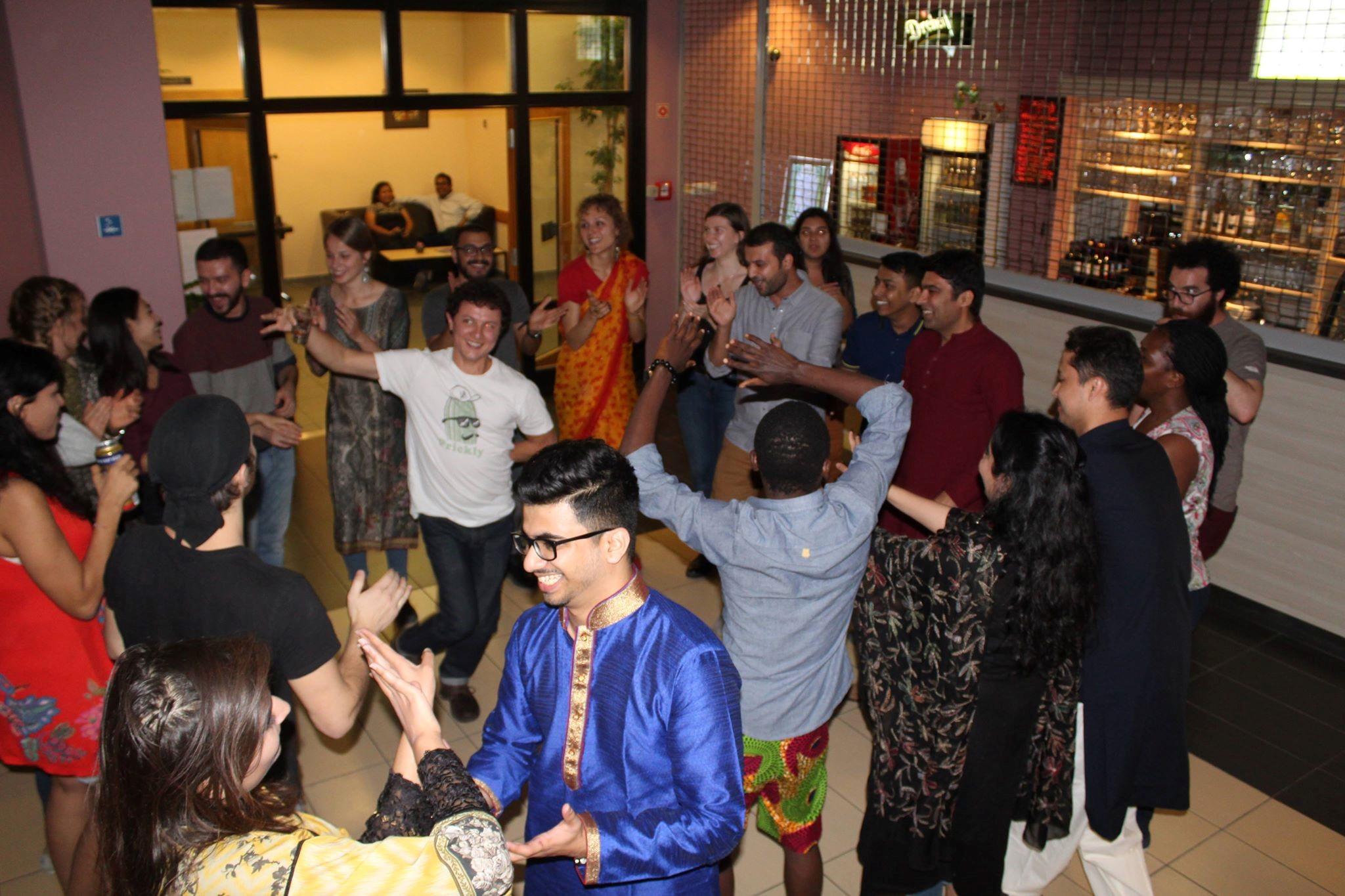 The dance floor at the Bambus bar in the Residence Center became a melting pot of cultures at the Diwali party. Photo: Eqra Jawaid

The drudgery of a monotonous life often finds a respite in such celebrations, when people come together, leaving behind their worries and boredom to cherish the moments of laughter and fun. The role of festivals for the student diaspora extend well beyond its significance only as a cultural artifact—they are a means to weave a comforting cocoon of nostalgia with the threads of diversity. These celebrations proved to be exactly that. As Roohullah Gulzari, 1st year student of MPA from Pakistan shared, “Celebrations transcends geographical boundaries, and nothing is more exciting than coming together to take part in sharing the happiness”. This respect and appreciation for diverse cultures is what makes CEU stands apart. We wish many more celebration, delicious food and togetherness for the months to come.